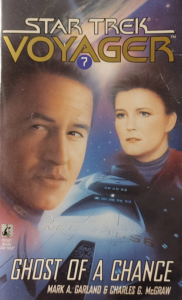 This week, when Voyager seeks to top up their deuterium tanks, they end up filling up their repair schedule instead. But when multiple crew members report seeing g-g-g-ghosts, they might end up rendering some good old Prime Directive–flouting aid to the nearby locals. How important is good PR in the Delta Quadrant? What kind of perfume are those Drosary ladies wearing? And where can I get me one of those aquatic massages? All this and more in Ghost of a Chance, the book that wants to show you this really cool telescope.

Voyager heads to the Drenar system to try out an experiment that, if successful, will refill their deuterium tanks. But when they drop out of warp, they hit the gravitational field of a brown dwarf star that Neelix swears wasn’t there before. They manage to break free, but only barely, getting pretty jacked up in the process. Meanwhile, Chakotay decides to tell the captain about the ghost he saw in a dream, which seemed to be pleading for help. Since a few other people have reported having the same sort of vision, Janeway agrees to check out Drenar IV, as long as doing so won’t violate the Prime Directive somehow. Almost immediately, she has her own vision as well, which takes her interest well beyond the merely archaeological.

After getting fired on while in orbit, their assailants, the Televek, answer an audio hail, claiming to also be checking out the seismic disruptions on Drenar. Neelix characterizes the Televek as unscrupulous arms dealers, and for once Janeway doesn’t outright ignore him. Baby steps! She still decides to tango with them, however, figuring she might be able to play them for some parts they need. The Televek send three representatives from a race called the Drosary over to speak for them—to get out in front of the bad PR, it would seem. But they drop enough hints to reasonably indicate they’re no more trustworthy than the Televek, not least of which is whatever voodoo the two lady representatives are working on Chakotay and Paris.

Janeway sneaks down to Drenar in a shuttlecraft with Kim and Tuvok and promptly gets shot down by the Televek. The Drosary claim it was Drenar IV’s planetary defense system that really did the job—that their comparatively weak phasers should only have scored a warning shot—and strike a deal with Chakotay to help them repair their phasers with no mutual, potentially Prime Directive–violating exchange of technology so Voyager and the Televek can assist the Drenarians together. While Neelix and Torres try to wipe the brown off Chakotay and Paris’s noses, Janeway meets one of the Drenarian locals and learns the terrifying truth about the earthquakes tearing the planet apart—namely, that the planet’s third moon is fairly new to the neighborhood, dragged in a year ago by the brown dwarf, and that those three moons are set to align in a cataclysmic syzygy, an event Tuvok calculates is only twenty-nine hours away.

Two authors, two debuts on this one. Cursory searching reveals Garland and McGraw to be regular writing partners who seem to otherwise be best known for a standalone fantasy novel called Dorella. We won’t see McGraw’s name again, but Garland will come up one more time flying solo on a future Deep Space Nine novel. Their work here is decent; if you were to describe it in culinary terms, the most accurate word would be “edible”. It’s not especially thrilling, but it’s far from a disaster.

The Televek are the strongest individual element here. For a numbered installment of perfectly average length, the extreme comfort the Televek feel with lying and the sheer depths of moral bankruptcy and casual cruelty Garland and McGraw are able to plumb are both pretty impressive. The Drosary make up the most intriguing subset of villainy found in this story. You can tell they’re exerting some kind of psychic juju to wrap Chakotay and Paris around their finger, but it’s hard to suss out specifics; it’s mostly the sort of thing you simply have to let play out. The Televek in the ships and on the ground never drum up the same level of interest, though there is one who is enough unlike her cohorts to stand out. In a better version of this story, her personality and influence might have been more acutely felt.

The failure to capitalize on its more exciting characters is actually something of a trend in this book. The one Drenarian we get extended page time with is absolutely adorable, but the story never returns to him after the initial encounter, and the lack of closure is a real shame. Also, even though the titular ghost[s] are present throughout the entire book, their coming through in the climax still somehow feels like a deus ex machina. None of this is bad enough to derail the book entirely or even significantly, but it does leave it a long way from memorable.

Average. Perhaps it’s a bit of a jinx to put the word “ghost” in your title, lest you risk leaving an impression about as substantial as one—which is exactly what happened here. The Televek make for a fascinating villain overall, though some individuals among them are definitely more interesting than others. Although nothing about this one flat-out stinks, it never gets much better than decent, either. Not too rough, but very much skippable.

NEXT TIME: Kirk wises fwom his gwave in The Return