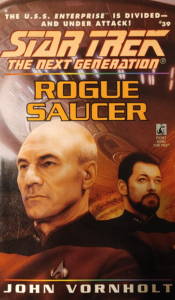 This week, when a malware attack softlocks the Enterprise bridge, Admiral Nechayev takes the opportunity to have them to test a new prototype saucer section. But when her new aide hijacks the experiment, the Prime Directive itself may be at stake. Who is the Architect? Who was the worst senior officer to babysit as a kid? And are canon-foreshadowing jokes ever not funny? All this and more in Rogue Saucer, or, When Keepin’ Saucer Sep Real Goes Wrong.

When the Enterprise scans a Pakled freighter headed for the Demilitarized Zone, someone piggybacks a baryon particle beam onto the return signal, completely frying the bridge controls. Operating from the battle bridge, Enterprise limps to Starbase 211 for repairs and maybe, if they’re lucky, a little shore leave. Everyone is fairly certain no Pakled is smart enough to pull off that baryon beam trick. In fact, given where they’re patrolling along with the knowledge of Galaxy-class bridge systems required to even think about attempting it, there’s really only one person it could be. It isn’t necessarily that person! That’s just speculation! But it totally is.

There’s no time to worry about that at present, however. Repairing the bridge takes top priority, and for Picard, checking out 211’s stunning museums and enviable collection of archaeological artifacts runs a close second. But that fire gets well and truly smothered the moment Picard recognizes the voice of Admiral Nechayev behind him. Nechayev hands Picard an experimental mission she feels is uniquely suited to his talents—or rather, his lack thereof. Which is to say, she thinks he doesn’t take advantage of saucer separation as often as he should. She wouldn’t say that if she ever saw how much of a season’s budget it eats up, but she hasn’t, and so she gives Picard this mission to test a new experimental saucer section prototype, which is designed to be able to survive a crash landing and take off enough to be tractor-beamed back into space by a ship waiting in orbit. Also, in case Picard starts to get too excited about the mission, Nechayev invites herself and her new aide, Henry Fulton, who wrote the simulation they’ll be running.

Partway through the experiment, Picard (on the battle bridge) and Riker (commanding the saucer) lose control of the simulation. Worf regains control of the battle bridge with an extremely clever fake kamikaze maneuver, but by that point it’s too late: Henry Fulton has hijacked the saucer and taken it for the Maquis. Once he has everyone incapacitated, another operative named Timothy Wiley, codename Blue Moon, takes over and reveals the master plan, which is to use the Enterprise’s ordnance to take out Spencerville, a colony ceded to the Cardassians, out of which their death squads are now based. Now Picard must call Beverly and Deanna to bring the original saucer section back from Starbase 211 so they can pursue the prototype saucer at full power, while Riker and Geordi must escape captivity and work from the inside to prevent the Maquis from using the saucer for a surprisingly wide variety of nefarious ends, from starting a war to violating the Prime Directive.

I’m just going to come right out with it: Rogue Saucer is incredible, just a ton of fun. If the mood struck me right, I might even be prepared to name it my favorite TNG novel to date. Putting away the starched shirts and getting a little dirty is a look TNG always wears well, and this is the purest expression of it so far. There was hardly a single character beat or element that didn’t bring an enormous grin to my face. Vornholt’s come a long way from the days of painful whiffs like Masks and Contamination. He really gets these characters now, and all of a sudden, he’s shot to the top of the list of authors whose takes on these characters I’m most excited to see.

Perhaps the most poignant of those character observations is Ro Laren’s, whose immediate post–”Preemptive Strike” life we get an occasional window into. Headquartered on a fire-blasted hell world by the ironic name of New Hope and known now as the Architect, Ro’s is a singularly lonely existence. As she quite astutely observes at one point, people who leave relatively simple civilian lives to join the Maquis might later be able to reintegrate into polite society, but officers who betray Starfleet will have a big neon target on their backs for the rest of their lives. She truly believes the Maquis way is the correct one, but her outlook on it is more nuanced than the usual “kill ’em all and let the Prophets sort ’em out”. Her beef is strictly with the Cardassians, not the Federation or Starfleet, and to emphasize that, she makes Wiley promise that there will be no Starfleet casualties on the saucer mission. The request earns her a fair share of side-eyes and cocked eyebrows, but since her knowledge is too valuable, no one dares to even consider mutiny.

At first, I wished there had been more direct interactions between Ro and the Enterprise crew—which is to say, any at all—but when I reflected on it a bit more, I realized it was the right choice. Ro’s exile from Starfleet doesn’t work if it isn’t anything less than absolute. One of the images burned most vividly into my brain from TNG is the final scene of “Preemptive Strike”, where Picard looks like he’s about two seconds away from punching a hole in a bulkhead, both over Ro’s actions and the fact that he played right into the ultimate outcome. If you have them make nice so soon afterward, you diminish the power that betrayal had. There’s a lot of regret and melancholy packed into the Ro Laren scenes in this book, and the writing in them is absolutely dynamite.

It’s not all wallowing, of course. Rogue Saucer has some of the best action scenes rendered in text as well. If there’s any fault to be found with it, it’s that it starts to sag just the teensiest bit in the last third or so. But it never gets too slow, and every character is in top form. Even Admiral Nechayev gets in a fair amount of solid licks—verbal ones, as you might guess, but she definitely shows some extra dimensions, earns a respect from a reader that she never quite manages in the show, and makes you realize why she’s got those pips. Rogue Saucer is a barrel of fun no matter how you slice it, the very best face TNG can put forward, and I can’t recommend it enough.

Excellent. Rather than give a blow-by-blow list all the things I loved about Rogue Saucer, it’s a lot easier, and not terribly inaccurate, to say “everything”. To me, this is about as perfect as TNG flavor gets. Everyone (except Guinan) gets something interesting to do, there’s a lot of wonderful character work (especially with Ro Laren), and the book bounces nicely from scene to scene and action moment to action moment, only occasionally sagging the bittiest bit. It’s hard to do much more than gush in very broad terms, though I did the best I could. I really just want to go tell you to pick this one up immediately if you’ve never had the pleasure of reading it. Neck and neck with Q-Squared for my favorite TNG novel to date. Read it. Read. It.