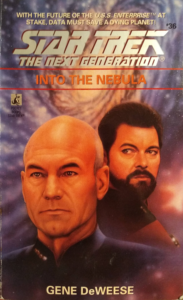 This week, when the Enterprise makes a new friend, he’d rather go to their house than let them come over to his. But when they start wading into the mess themselves, the natives suspect that someone else may be uploading all that spam to the cloud—and they may be right. Does Picard care which admiral he talks to? How beside the point do you have to be for Data to cut you off? And could Spot be the key to the whole mission? All this and more in Into the Nebula, a book with surprisingly few nebulae in it!

Into the Nebula
Author: Gene DeWeese
Pages: 274
Published: July 1995
Timeline: Season 7, after “Force of Nature” (episode 9)
Prerequisites: A reference to “The High Ground” (S3E12); otherwise, none

The Enterprise happens upon The Hope of Krantin, a broke-down hoopty of a generation ship with about 10,000 people onboard. The nominal leader of the Hope of Krantin is Koralus, whose job appears to be to hang out alone on the bridge, keep an eye on what few cryostasis units still work, and procrastinate on telling the rest of the crew the truth about the extent of the damage to the Hope’s drive. The Hope of Krantin isn’t doing so hot in general, having taken off (along with a handful of other such ships) from the planet it takes its name from 90 years prior, and having made it a grand total of one (1) light year in all that time. And neither is the homeworld itself, which for five hundred years has been surrounded by a cloud of waste its dwindling population calls the Plague, which they are no closer to ridding their world of even as it chokes out all life on the planet and reduces the liveable area to one city, with only about a million residents remaining.

The Enterprise’s sensors can’t see very far through the thick field of matter polluting the space around Krantin, but they can tell enough to figure out there are a couple of ships blipping in and out of it, and that it’s also actually creating matter, which is super-odd. Taking a shuttle down, Riker, Worf, and Geordi meet a woman named Ahl Denbahr, who vibes with absolutely everything they are laying down and immediately recognizes the Enterprise crew as the miracle Krantin desperately needs. She agrees to procure them a unit that runs Jalkor’s (the only city’s) power plant so they can study it and replicate a new one, but they are waylaid by the security forces of President Khozak, who calls off his dogs pretty quickly but butts into the situation to provide the usual bureaucratic pushback.

Eventually, we learn that the Krantinese1Gene’s word, not mine. I think “Krantinians” would have sounded a lot better, personally. began to suspect after they maxed out their anti-pollution tech and still weren’t making a dent in the Plague that it was being created by an outside party—a suspicion that turns out to be correct. They learn that the Plague consists of waste material from an alternate-reality Krantin that’s been broken down to its component atoms and molecules. Five hundred years ago, alt-Krantin started experimenting with matter transmission, and although they never mastered it, they did figure out how to make objects “disappear”—or so they thought—and just started zapping all their waste out of existence (which, yes, does include that definition of “waste”). Zalkan, a colleague of Denbahr’s who weaned her off the reality simulations, is a man from that alternate reality who’s taken up permanent residence in this reality, and is part of an underground group of scientists trying to stop his Krantin’s ruling body, the Directorate, from getting regular Krantin’s dilithium, a substance regular Krantin has no idea the value of or even that it’s inside their planet. Zalkan has been developing some energy fields he hopes can stop both the Plague and the Directorate, but the effects of his experiments have made him terminally ill—but the arrival of the Enterprise may be just what he needs to tip the scales in his movement’s favor.

There are a lot of plates spinning at once in this one, and on occasion it threatens to get messy, but overall it’s fairly likeable. This is the kind of book where you’re curious to see how it all adds up, and each new detail makes you want to get there that much faster. It starts running out of gas a bit toward the end, but not in time to do any significant derailing; by the time that happens, you’ve already enjoyed most of what the book has to offer. It’s also the first book to prominently feature Data’s cat Spot, and as a bonus, it actually ties in to the main action instead of being its own inconsequential side thing, something not even many of the episodes featuring the pet manage, if any.

As usual, the fate of an entire planet ends up being decided by three or four people, and in this case the group is a fascinating one, with most of them carrying some of kind of psychic burden or interesting secret. In particular, I was surprised by how much I enjoyed President Khozak. He’s a character type that’s easy to dislike, and which I typically do: an arrogant, impatient hothead who can’t sit still and shut up long enough to let an idea play out. But there’s more nuance than usual to the way he’s limned, where you can tell he more or less knows what the right thing to do is, but has been worn down by the Plague for so long that he can no longer see the forest for the trees. Good character work props up most of this book; when it starts to sag structurally, those performances keep it enjoyable.

The last time Gene DeWeese dabbled in TNG was before the series even began, when he turned in the execrable Data/Geordi romp The Peacekeepers, a book that couldn’t have had a more appropriate placement in the numbered series than #2. The series began and ended between then and the time Into the Nebula was published, and in that time both the show and DeWeese grew and became wiser. Messy old TNG produces a messy Gene DeWeese novel; mature, finely-aged TNG produces a robust and fun Gene DeWeese novel. Who knew it was such a one-to-one proposition?

Good. A bit flabby at both ends, but a nice enjoyable middle. It’s the kind of book where your reading is propelled forward by the anticipation of seeing how the pieces fit together. When it juggles a little too much at once or falls a bit flat, solid character work is there to prop it up and keep it trundling along. Plus, it’s weirdly satisfying to see Spot have something significant to contribute to the action instead of just jumping up on a desk or turning into an iguana.

NEXT TIME: Janeway ignores Neelix and plunges headlong into Ragnarok