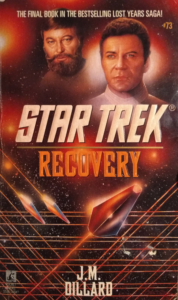 I can’t believe we’ve made it this far already. It seems like only yesterday we were kicking off with The Motion Picture, and now we’re getting ready to dive into the sixth Star Trek television series. Sixth! That’s absolutely bananas. I can’t wait to dive headfirst into the adventures of Burnham, Tilly, Saru, silver-fox daddy Pike, and all the—

Recovery
Authors: J.M. Dillard, Kathleen O’Malley1Kathleen O’Malley deserves her name on the cover if she did the amount of work Dillard says she did. Three separate sources help piece together much of how it probably went down. In the acknowledgments to Recovery, Dillard says O’Malley “wrote a huge portion of the first draft and provided emotional hand-holding for me during a very difficult year.” Memory Beta cites an interview from the magazine Star Trek Communicator, saying, “O’Malley wrote James T. Kirk character scenes while Dillard focused on technical details and Spock scenes.” And Voyages of Imagination says that Pocket Books wanted a book about Kirk, but Dillard wanted to do one about McCoy. I’m going to speculate that Dillard really really did not want to write about Kirk, but didn’t have the fight in her to push for a more McCoy-centric story (on account of that “difficult year” she was having), and so leaned on a friend to help put it all together. I am going to assume the Kathleen O’Malley in question here is not the same Kathleen O’Malley as the film/television actress of the same name or the United States Circuit judge of the same name, though I could be wrong. Certainly, stranger things have happened. O’Malley will eventually get her name on the cover of another collaboration with Dillard: Possession, a TNG numbered novel we are a little less than a year away from reviewing, and which is actually the sequel to one of Dillard’s first Trek novels, Demons.
Pages: 277
Published: March 1995
Timeline: A few weeks before the events of The Motion Picture
Prerequisites: “The Tholian Web” (S3E9); events from The Lost Years are referenced and characters from same recur

Just as Kirk marches upstairs to give Admiral Nogura a piece of his mind for keeping him deskbound for too long, the old man hands him a space assignment: he’ll be on hand for the maiden run of the Recovery, a fully automated ship designed to evacuate large populations without calling in other ships and risking their crews. For its inaugural test, Recovery will be evacuating a research station on Zotos IV, a planet in a truly tricky spot, situated on the borders of Federation, Klingon, and Tholian space. Kirk will be watching from aboard the Paladin; McCoy is on the Recovery itself as a civilian guest of honor, but opts to voluntarily stay separated to avoid accusations of collusion. (And because he’s worried Jim is still mad at him for chewing out Nogura for making Jim a desk jockey.)

Kirk has previously been skeptical of the Recovery in preliminary assessments, mostly on account of its defensive systems, which he is unsure make for a good look, particularly in a vessel with such a humanitarian mission. But Recovery’s designer, Myron Shulman, is determined to set him straight. Kirk throws a few curveballs at Recovery to see how it fares in a scenario that isn’t pre-arranged. But Shulman has already anticipated that Kirk wouldn’t be satisfied with his initial demonstration, and decides to amp it up—to a deadly degree.

Recovery opens fire on the Klingon, Tholian, and Romulan spectators before turning on the Federation teams. Convincing them it was an accident is a miracle, and one Kirk manages to pull off, but that’s only the first of many. Recovery’s creator has gone as haywire as the ship he created, assassinating members of the Federation Disaster Relief Agency one by one and spouting a load of gibberish about avenging “the holy triad”. No one knows what he’s on about, but they’re going to have to figure it out pretty quickly, because Recovery has set its own course for Tholian space, and if Kirk and Bones can’t stop it before it crosses the border, they’re staring down the prospect of interstellar war.

Recovery is a much more loaded title that you generally expect from these books. It’s about a lot more than a ship by that name, for sure. For example, it wouldn’t be James Kirk if he didn’t manage to finagle himself into the command chair; he’s recovering what he feels is his rightful place on a starship. Kevin Riley recovers some of the ground he lost with his ex-wife, Anab Saed, who features pleasingly prominently into the action. Spock, seen only intermittently, attempts to recover from his lapses into emotion at the remembrance of his friends, whom he senses are in danger. But there’s a meta meaning I think beats all other readings: Recovery could very well be construed as a sly jab about getting the Lost Years saga back on track after the not-so-much bad but certainly less successful diversions of A Flag Full of Stars and Traitor Winds.

Recovery is the best Lost Years novel since, well, The Lost Years, and it casts a revealing light on what was missing from the middle two installments. For the Lost Years to really click, it can’t just be as simple as “stories that take place between the five-year mission and The Motion Picture“. There has to be a genuine connection to the film and to the lore for it to be effective. No disrespect to Brad Ferguson and L.A. Graf, but that’s not something their books tried all that hard to achieve. A Flag Full of Stars at least engaged with the Lori Ciana relationship, but mostly kind of did its own weird thing. And while it was good and vital to see what the junior bridge officers were up to in the interim, L.A. Graf clearly saw Traitor Winds as another opportunity to lavish more love on their preferred power trio. Again, not that these books were bad—I rated both quite highly—but viewed as extensions of The Lost Years and analyzed within that rubric, they do lack that next-level pop.

The only major problem with this book is one I think was outside Dillard’s control, and it’s that it seems bizarrely hell-bent on spoiling itself before you even open it. The back cover mentions Recovery’s creator as “[falling] under alien influence”, and though you can pick up on subtle clues pertaining to that as you read, the full extent of it is not explicitly revealed until almost 200 pages in. The cover art may also prove sufficient to tip a reader off as to which species will eventually be revealed to be responsible for Recovery’s sabotage, if they’re familiar with certain visual elements of the Original Series. I may have even managed that myself in describing all this. But of course, it’s the finer details that really matter, and those are too indelible to risk airing out here.

I had long kind of suspected it, but Recovery confirms that The Lost Years would have been better off spending its entire run under Dillard’s wing. She originated the concept and showed the strongest grasp of it from beginning to end. If anything, however, the general trajectory of the series shows how tough it can be for even devoted fans to embrace the trappings of The Motion Picture warts and all. Certainly I appreciate it, and I can tell you why it’s an important piece of Trek. Do I love it, though? Of that, I’m not as sure. What The Lost Years needed was those rare breeds who can love it, and for at least a couple of those books, it got that.

Though it tries its best to spoil itself before page one, nothing can stop Recovery from being a fun romp and a solid end to what’s overall been a somewhat troubled, though still consistently good series. The return of The Lost Years to Dillard’s care confirms that it should have been her baby all along. To achieve true excellence, it needs to be more than just “stories that take place between the five-year mission and The Motion Picture“. It needs to show a genuine love for the trappings of that era of Star Trek, and Dillard and O’Malley are the only Lost Years authors to reach that transcendence.

NEXT TIME: More pirate action in Blaze of Glory