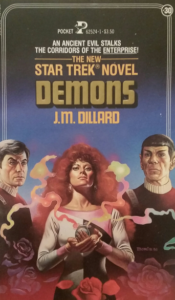 This week, almost everyone on the Enterprise and most of the population of Vulcan fall prey to energy-based brain parasites that take over their minds, and it looks like the only cure is fresh air and exorcise. Will Spock, Bones, and the New Girl of the Week tell the parasites “Get behind me, Satan”, or will they succumb to the temptation to let them take over the galaxy? It’s J.M. Dillard’s Demons, or, Possession Is Nine-Tenths of the Crew.

Demons
Author: J.M. Dillard
Pages: 251
Published: July 1986
Timeline: After TOS
Prerequisites: None
Not to be confused with: “Demons” (ENT S4E20)

Zaloom! Our adventure this week opens with a brief prologue on Beekman’s Planet (not to be confused with Beakman’s World, which is inhabited by a race of schlubby men in rat costumes). An ancient evil that once destroyed a civilization is shaking off the sleepies, and strange things are afoot at the Circle K…

Meanwhile, Sarek gets a visit from his brother Silek, whom he hasn’t caught up with in 38 years. Not out of enmity or anything—it’s just, you know how it is, you get busy with this, that, and the other, and before you know it, 38 years have flown right past you. Happens to the best of us. Anyway, Silek has come into possession of a shiny makeup compact that no one can open, even though they’ve tried running it under hot water and banging it on the edge of the counter. Starnn, Sarek’s father-in-law, palms one off on Sarek. Starnn’s daughter T’Ylle, from the Beekman’s Planet prologue, recently died, and Starnn’s not doing so hot himself, unless casually pulling the wings off beetles is something healthy, mentally stable Vulcans do.

Over on the Enterprise, Spock is playing chess with the New Girl of the Week, and would you believe it: despite being a new ensign fresh out of Starfleet, she is the intellectual equal of everyone on the ship in every conceivable way. Dr. Anitra Lanter is the name, and showing up superior officers is her game. After driving Bones mad with envy and cheesing Kirk off with practical jokes, it’s revealed she’s working undercover under Spock’s command, so her nonsense is retroactively tolerated. Also, she has a super-high psi rating, which humans who aren’t under some kind of external influence generally don’t have, but I guess we’re just rolling with it. She also has an ulcer, which is brought up a few times but isn’t important. Honestly, her characterization is a total mess, and she really only seems to exist and be the way she is so the brain parasites have a really juicy target.

Admiral Komack reroutes shore leave to Vulcan, and everyone has a great time. Just kidding! The relatives we’ve never seen or heard from before now are dead, and now Sarek is acting funky, and if “funky” is an accurate way to describe how a Vulcan is acting, you know trouble is brewing. Turns out Starnn and Silek didn’t just bring back a bunch of makeup compacts back from the Hydrilla sector—they also brought the ancient evil with them, and they’re popping out of their little unopenable boxes and possessing whoever they can. They weren’t a problem before because the Hydrillans’ spacefaring capabilities weren’t much to sneeze out, but now that they’ve got their brain-sucking hooks in some people with access to a sweet ride, they intend to infect the galaxy at large. That’s right, I said “brain-sucking”; we’re dealing with what essentially amounts to an energy-based brain parasite—”subatomic particles that can bond to chemicals in the brain”, as Spock explains it (p. 96). It’s not known how they can do it, and it doesn’t matter. And of course they want Anitra real bad, because her curve-wrecking psi rating will make her an excellent amplifier.

Lest anyone start crying “Mary Sue”, Dillard’s McCoy is here to remind us that canonical characters can be written just as sloppily as original ones. It’s reasonable enough to figure he wouldn’t quite be on Spock’s or Anitra’s physical level, but he contributes far more to the problem than to the solution. Once they get to Vulcan, McCoy spends all his time either getting owned by Vulcan predators or passing out from the heat, then yelling “You’re not going anywhere without me!” and dragging his at most 25 percent-recovered jalopy of a body back into action in spite of Spock’s protests. This is a major irritant that screws up decent plans and costs them a lot of valuable time, until of course the exact moment it isn’t and works out perfectly. McCoy normally runs hot, emotionally speaking, but he never actively impedes a mission. This is a misfire of the most disappointing sort.

So Demons gets at a kind of horror vibe that isn’t Star Trek‘s usual stock in trade. And on paper, Invasion of the Body Snatchers á la Star Trek sounds like something that could work and be really cool. So much of Trek is about diplomacy and reasoning through conflict that simply fending off something scary and purely evil actually counts as a novel change of pace. Scenes alternate between Spock, Bones, and Anitra taking care of business on Vulcan and Uhura, Kirk, and Security Chief Tomson holing up in auxiliary control on the Enterprise and sabotaging the navigation systems to render the ship adrift so that possessed-Scotty can’t take it to the densely populated Rigel system, where the sheer volume of ship-to-ship passages and transactions ensures the parasites’ total galactic dissemination.

But the execution here leaves a lot to be desired. For one thing, you’d think relatives Sarek and his brood hadn’t seen in nearly four decades would be a way bigger deal, but they amount to nothing more than mere monster fodder. And speaking of Spock, his dialogue never really clicked for me, leading to a lot of “he wouldn’t say that that way” moments. (I didn’t have that problem with Mindshadow, which makes me wonder if Demons was submitted before Mindshadow but published after it.) McCoy and Anitra are so extra, I can’t even. The brain parasites have little to no real motivation and are anticlimactically dispatched. And I was just never really that unsettled by all the so-called horror elements, to be honest. Demons has a lot of ideas with solid potential, but it just doesn’t fire on any cylinders. Too bad.

I give Demons 2 out of 5 energy-based brain parasites. Unfortunately, Dillard falls victim to the sophomore slump. That’s really too bad, because the concept is sound; she just doesn’t pull it off so well. Another story by Dillard with a similar approach, Bloodthirst, is coming up in a few months; hopefully it turns out to be a more successful take on the horror angle.

NEXT TIME: We get first-day jitters for Vonda N. McIntyre’s Enterprise: The First Adventure