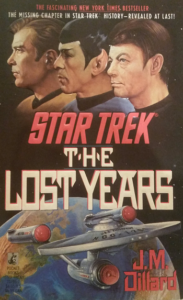 This week, the Enterprise returns home from its successful five-year tour of the galaxy. They’ve played a lot of legendary shows and sold a ton of merch, and now they’re ready to live off the royalties. But there’s another rock god waiting in the wings to do some distressingly literal face-melting of his own. Meanwhile, Kirk reluctantly settles into the desk jockey phase of his career, Spock falls back on teaching, and Bones tries freelancing, but everyone knows the universe can’t keep these three separated for too long. What’s Kevin Riley up to these days? What happens when pulling rank goes wrong? Should McCoy try to get that subspace phone call fee waived? It’s the book that believes in the heart of the cards.

Have you ever wondered what happened in the period between the end of the five-year mission and the events of The Motion Picture? If so, you aren’t alone: so did several authors affiliated with Star Trek novels. A breathless introduction heralds the arrival of this grand new saga, which stood poised to change everything that Star Trek fans thought they knew and rock them to their very cores.

If you’ve peeked ahead or already know your stuff, then you know this isn’t quite how things turned out. A Flag Full of Stars, written by Brad Ferguson, whose only other Trek novel we’ve looked at to date is the execrable Crisis on Centaurus, did eventually come out, though not quite as hot on the heels of this one as the introduction seemed to indicate it would.1At our current pace, we’ll reach that book in late April 2019. The War Virus, the third book in the series, was to be written by someone named Irene Kress, but that book was canceled. To date, no one by that name has written any Star Trek novels.2Due to the lack of existing information about anyone named Irene Kress, some have speculated that she may actually in fact be Nancy Kress, a science-fiction author and winner of several Nebula and Hugo awards who sometimes writes under the name Anna Kendall, and who is also Facebook friends with several well-known Trek authors, including Diane Duane, Peter David, David Gerrold, and, perhaps most pertinent to this footnote, Ann Crispin, who dedicated the TNG novel The Eyes of the Beholders to Irene and also gave her a nod in the acknowledg-ments of the event novel Sarek. None of this is confirmed, but it’s pretty irresistibly juicy all the same. The Lost Years ended up being a four-book series, consisting of The Lost Years, A Flag Full of Stars, Traitor Winds (written by L.A. Graf), and Recovery (Dillard again). The saga seems to have had a tumultuous development cycle, but does this first installment augur well for it?

The book certainly starts off with a bang. Zakal the Terrible, “greatest of the Kolinahr masters”, is dying, and his son Khoteth has traveled through a raging sandstorm to attend to him. Zakal hails from the time when Vulcans used their mind powers for little more than high-octane terrorism, but Khoteth is now going by Sotek and has become a follower of Surak. Despite following the path of peace and logic, Khoteth/Sotek agrees to preserve his father’s vrekatra, but only as a precaution against other Vulcans he considers dangerous, and because a promise is a promise. Zakal is disgusted that his knowledge will be used to further the cause of peace, but he also can’t abide the thought of total nonexistence, so he agrees to be preserved, his desire for revenge motivating him all the while.

Fifteen thousand years later, the Enterprise is returning to Earth and bringing its wildly successful five-year mission to a close. It’d be nice to see what all of the senior bridge officers got up to in the interim, but this book, like so many others, only has eyes for the main power trio—and none of them end up getting quite what they want. Kirk wants to make a lateral move directly into another captaincy, but ends up taking a position in the admiralty created specifically for him, going into the thick of sticky diplomatic wickets as basically a last-resort man. Spock resigns his Starfleet commission and accepts a teaching position at the Vulcan Science Academy. Dr. McCoy decides to go back to Yonada, do some medical research on the Fabrini records, and hopefully make good on his promise to pick up where he left off with Natira.

Kirk, Spock, and McCoy all end up with lady friends, but it’s hard to get invested in these relationships because they must all necessarily end (if not in this book, then sometime) so that the canon can assert itself when the time comes. Watching Kirk and Lori Ciana gradually worm their way into each other’s hearts is sweet, but it’s cold comfort when you know she’s going to eventually wind up a pile of organic slag in a transporter malfunction.

For me, the book’s most memorable scene is the tarot reading given to Spock and his fiancee T’Sura by Dr. Keridwen (“Dwen”) Llewellyn, Dr. McCoy’s maybe-kinda-pretty-much-girlfriend-although-maybe-not-but-they-definitely-care-for-each-other-in-a-more-than-a-friend-type-of-way. This might seem like a peculiar thing to throw into a Star Trek story, but in a book where a dead Vulcan basically uses the Force to make people’s brains leak out of their ears, it barely moves the needle on the weird-o-meter. Plus, there’s a fair amount of fun to be had in watching enlightened 23rd-century Star Trek characters react to something as arcane and unscientific as tarot. That scene reverberates throughout the rest of the book, as McCoy tries not to buy too much into the grim future the cards portend and gets angry at himself when he does. It’s hard not to sympathize with McCoy at times, but there’s no denying that it contributes some extra power to the emotional impact of the climax.

T’Sura never factors in in any significant way, so it basically comes down to two main threads. On one side, a student of Kolinahr named Sekar secretly wants to give the ancient knowledge of the Vulcan mind rules to the Romulans and enlists Zakal’s katra for help, and in the process wades a little deeper into the crazy pool than he bargained for. Spock, Dwen, and Kolinahr High Master T’Sai must then pursue Sekar/Zakal and try to keep him from imparting his devastating knowledge to the Romulans (and also from killing McCoy, who was sleeping in the scout ship when Zakal stole it and is now his de facto hostage). On the other, Kirk and Lori Ciana are trying to defuse a situation with the Djanai, vaguely Native American-esque aliens who want their land to stop being desecrated by the Inari, who left for another planet, made huge technological advances there, wrecked it, and then came back to Djana to install their own government and push around the people who had stayed there in the first place.

I wasn’t too into the Kirk/Djanai stuff, but even if I had been, the Vulcan parts would still have blown it out of the water. Zakal is a legitimately frightening villain who in all truth would probably win if not for a few convenient strokes of luck on the good guys’ side. Given that J.M. Dillard also wrote the novelization of Star Trek V that came out just a month prior to this, I find comparisons to Sybok natural, if a little lopsided. Zakal makes Sybok look like a rank amateur. He’s without question the most purely evil Vulcan to appear in a story to date. His presence is absolutely electrifying, and he steals every scene he’s in. It’s a shame he’s not the one that got to grace the silver screen.

By the time the book wraps, you start to get a general idea of why the main three ended up where they were at the start of The Motion Picture, most notably in terms of personal grief motivating Spock and McCoy to embark on the paths they chose. It all only really starts to coalesce near the very end, but better late than never. The actual result is maybe a tiny bit less compelling than you would hope given the plum high-concept premise, but it’s still a solid read with plenty of well-realized character touches. It’s self-contained enough that I’m not sure what the other three books can add to it that won’t seem superfluous, but as always, time will tell.

I give The Lost Years 3.5 out of 5 puddles of melted skin. It sets out to draw a line from the end of the five-year mission to the beginning of The Motion Picture, and that line tracks well enough for the time being. Its villain leaves a heck of an impression that sets a lofty bar for future installments (in both the Lost Years saga itself and TOS novels in general) to match for sheer off-the-wall insanity. Although it seems I found no end of things for which to take it to task, I liked it quite a bit, and I think that without an author of J.M. Dillard’s talent at the helm, that may not have been the case.

Next up in the saga is Brad Ferguson’s A Flag Full of Stars. I always go into any book hoping for the best, but I’d be lying if I said I’m thrilled about that one.

NEXT TIME: Picard accepts the charges on A Call to Darkness