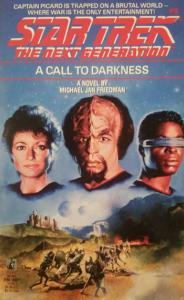 This week, Picard yet again vetoes Riker’s call on not joining the away team, and gets his brain wiped for his trouble. While he and a few other senior officers make uncredited cameos in the planet’s televised war games, Riker has to deal with standoffish leaders, planetary shields, and an assistant doctor with different priorities. Is Riker just chopped liver or what? Does Picard really care about his friend’s daughter? How much research should you do before you throw a coworker under the bus? It’s the book that desperately needs a ratings boost.

The Enterprise is searching for the research vessel Gregor Mendel. Everyone is working overtime for Captain Picard because they can tell he has some sort of personal stake in the mission, though they don’t know the specifics. It turns out the daughter of one of his close friends serves on the Gregor Mendel, all of the crew of which have mysteriously disappeared from the ship without a trace. Don’t worry too much about this—the book certainly doesn’t.

Because of this intense personal connection to the mission, Picard insists on beaming over to the Gregor Mendel with the away team despite Riker’s vehement objections. This push-and-pull between Picard and Riker played out almost exactly the same way just two books ago, and at this rate it is quickly becoming a trusty indicator of a bad TNG book. Like, why even have a first officer if you’re just going to pooh-pooh his very reasonable suggestions? “Mm, yes, I hear what you’re saying, Number One … and I’m going to wipe my butt with it and flush it down the sonic toilet.”

So instead of Riker disappearing during the investigation of the Gregor Mendel, it’s Picard that vanishes, along with Worf, Geordi, and Doctor Pulaski. (Also some security officers, but they’re never mentioned again.) The four have their memories erased and are set to work on various tasks in their respective wheelhouses. Worf is plunged into battle; Geordi is enlisted to help build a bridge; Picard leads a wagon train; and Pulaski rushes to heal a flood of patients in a medical ward that makes M*A*S*H* look like The Mindy Project, all while floating cameras luridly record her patients’ death throes.

The aliens responsible for the memory erasure are the Klah’kimmbri of the planet A’klah, though they won’t cop to it so easily. Riker has to nudge the ship into their solid-gold energy shield just to make them notice the Enterprise, and from that point most of his time is split between trying to find his crewmates—indeed, his friends—and holding out as long as he can before giving in to the protestations of Pulaski’s assistant and running to a starbase to cure the contagious full-body system failures spreading among the crew.

None of the above plot elements are given as much page time or dramatic development as the travails of one of the Klah’kimmbri, a man named Dan’nor Tir’dainia, who was on the up-and-up in the planet’s military until he made a mistake that allowed the Enterprise to infiltrate the planetary defenses. He might have gotten away with it too, if the supervisor he ratted out hadn’t been boinking a councillor’s daughter. Whoopsie! Now the other guy got promoted and Dan’nor is out on the skids. But he’s not out of options just yet: he can always join the forthcoming revolution, spearheaded by none other than his deadbeat dad Trien’nor.

Trien’nor and his squad seek to put an end to the Conflicts, the televised bloodbaths the military airs to entertain and placate the lower classes. Apparently, the supply of off-worlders the Klah’kimmbri capture, mind-wipe, and conscript for these events is drying up, and to up the wow factor, the military plans to make them bigger, bloodier, and more frequent, and also start throwing domestic political prisoners and dissenters in the mix. This is a cool idea and all, but there’s practically no connective tissue linking this to the goings-on of the Enterprise crew. Picard turns out to be sharing the supply wagon beat with one of these conspirators, a man named Ralak’kai. But with Picard’s memory erased, and no way of regaining it that isn’t completely random or accidental, he can’t make any meaningful connections to solve his dilemma himself. The same goes for Geordi and Worf; Pulaski’s memory returns after a bright flash of light goes off in her face, but it still takes a last-minute stroke of luck to set things right.

Friedman wrote himself into a doozy of a corner with all that memory loss business, but that’s just one of the myriad ways in which A Call to Darkness is underwhelming and sloppy. Another is that Picard’s friend’s daughter winds up being a total non-factor. I forgot completely about her until she showed up briefly at the end (she’s nowhere to be found in the main story). Characters sometimes make mountains out of things that turn out to be molehills, though that’s largely a function of the book’s total inability to juggle plot points. (Sam Burtin may be freaking out, but you can’t say he doesn’t have his patients’ best interests at heart.) It’s just a huge mess all over.

All of it comes careening around a corner into a slapdash ending that leaves you wondering how you’re going to get all that time back. Without ever explaining exactly how it worked, Pulaski is able to replicate the flash of light to bring everyone else’s memories back. The inevitable sea change in Klah’kimmbri society feels rushed, forced, and unconvincing. And for all the time spent on Dan’nor and his journey from reading his first “So You’re Ready to Join a Planetwide Revolution” pamphlet to taking up his father’s mantle, I don’t find myself remembering much of it or caring about it. There’s just not a lot going on in this one that I can get behind.

I give A Call to Darkness 2 out of 5 televised battles. Friedman’s second dud in a row: a slow starter that doesn’t have any of its ducks in a row and often feels like it’s marking time. It has some decent worldbuilding in spots, but none of it ever comes together in a cohesive fashion. This book exhibits the kind of sloppiness you would expect from some of the earliest TOS novels. If you’re looking for works that soften some of Pulaski’s rough edges and make her more palatable, this is a pretty strong showing for the character. Otherwise, skip it.

NEXT TIME: Four characters recount their experiences with The Kobayashi Maru