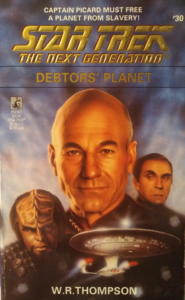 This week, the Enterprise picks up a face from the past who seems to have found his groove i the future. But when a scheme by the Ferengi shows a conspicuous lack of profit motive, more than a few people start to wonder who its true masterminds are. Where did Geordi learn to suppress his VISOR pain? Which sitcoms will survive into the 24th century? Will Wes get the win he needs? All this and more in Debtors’ Planet, the book that brings back the energy whips!

The Enterprise picks up an ambassador from Starbase 144 named Ralph Offenhouse. The name tickles Picard’s memory, and when he pulls up his file, he understands why: Offenhouse was one of the three people they successfully resurrected from cryonic stasis in the season 1 finale “The Neutral Zone”—specifically, he was the obnoxious businessman. Offenhouse’s fears about how his skill set would translate to a post-scarcity galaxy prove to have been unfounded; with the Federation having moved so far beyond personal greed and profit motive that they can barely wrap their minds around it, the insight his 20th-century business brain can offer about the Ferengi is a valuable asset.1Alas, the book offers no such updates on the resumed lives of Claire Raymond and L.Q. “Sonny” Clemonts.

The Ferengi have artificially accelerated the planet Megara’s journey to modernization, and in return, the Megarans have submitted to indentured servitude. Right off the bat, this doesn’t sound like the kind of business that has Ferengi fingerprints on it; indeed, one of the Ferengi wonders aloud what’s to stop the Megarans from arming themselves and vaporizing their Ferengi masters once they’re fully modernized. More suspiciously, however, and more to the point, the scheme appears to have no obvious avenues to short-term profit, and the long game isn’t really their jam.

The fishiness of the whole thing leads a number of crew members to independently conclude that an unknown third party may have a finger in the Megaran pie. What they find in their investigations not only reveals that a nasty war is imminent, it also dredges up some suppressed feels in Offenhouse, who may not be acclimating to 24th-century life as well as his blustery facade may suggest, and who is hanging onto some major guilt about things he did back in the 20th century that are genuinely surprising, but plug smoothly into the canon and make for some juicy lore.

Usually, when an author admits they aren’t really a fan of Star Trek, whether in Voyages of Imagination (as here) or wherever, it’s a pretty big red flag. And not to put too fine a point on it, but the Ferengi in TNG suck out loud. So it’s especially impressive that W.R. Thompson not only overcame both those hurdles, but did so spectacularly. Most of it comes down to his character handling, which is impeccable across the board. (I even enjoyed Worf!) Let’s start with Offenhouse, since he’s the guest of honor; this is a character I probably would never think about if I wasn’t watching “The Neutral Zone” at that exact moment, and among the three characters featured in that one, he probably wouldn’t have been my first pick for a follow-up. But making him an expert in Ferengi motives is a canny move, and his 20th-century backstory is, frankly, a stroke of genius—I don’t dare spoil it here, but I will say its fit into existing canon is very intriguing, and the emotional component is added smoothly enough to not feel contrived.

The other two characters whose skillful rendering I found most notable are ones that are usually on the receiving end of fairly savage mockery: Wesley and Alexander. Debtors’ Planet is set after “The First Duty” but before Wesley burns out and starts space truckin’ with the Traveler, and it offers a fascinating glimpse into what his life track could have looked like if he had had a good friend and gotten a sorely needed personal win during that period. He’s paired here with an ensign named Shrev, a member of an insectoid race called the Zhuik,2Although she’s clearly meant to be an Andorian. The name alone is a dead giveaway, though a few details that were left in support it as well, and anyway, Thompson basically said as much in Voyages of Imagination. and their dynamic is so sweet, I accidentally wrote it down twice. Wes and Shrev have great respect for each other as colleague and immense admiration for each other’s culture, and it’s actually sad that their relationship must by necessity remain platonic. Meanwhile, Alexander fills a role that, incidentally, would probably normally be occupied by Wesley: helping out in engineering. Rather than being obnoxious and in the way, Thompson allows him to ask smart, pointed questions and make strong contributions, and he really feels like a natural fit for the department.

Though I enjoyed the workings of the plot plenty—I guessed who the mysterious third party was about two pages before the reveal—I enjoyed Debtors’ Planet much more as an exercise in flavor. All the character interactions are very well done, and the book is often genuinely funny, which TNG often has trouble nailing. For a self-professed non-fan, Thompson sure does grok what makes this universe and these characters tick. Bringing back Ralph Offenhouse is an unexpected but fascinating idea that’s solidly fortified by inspired choices and shown work. Next Generation numbered installments rarely achieve what they set out to do this well, and for that reason alone, it’s worth a pick-up.

I strongly recommend Debtors’ Planet. This one really caught me by surprise. I know it’s hard to believe a TNG Ferengi episode could be great, but here we are. It’s got everything you could want, from an intriguing plot featuring unlikely bedfellows, to delicate care taken with characters who haven’t always received the best of it (to say the least), and it adds delectable detail to existing lore. It makes me want to read more W.R. Thompson Star Trek novels! How many more are there?

NEXT TIME: A Cardassian deserter plays hide-and-seek in Betrayal