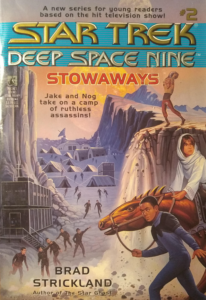 This week, Jake misses terra firma enough to take Nog up on some ill-advised shenanigans. But when their unwitting Uber driver gets kidnapped, suddenly they’re the ones playing secret agent. Is there any such thing as a poisonous snake? Is Vedek Bareil just chopped liver? And is there any way Ben raised Jake to talk to women like that? All this and more in Stowaways, the book where the beach is transparent.

Dr. Bashir wants to take an opportunity while things are slow on DS9 to pilot a shuttle down to Sakelo City on Bajor for a few days. Jake, missing the feel of real land beneath his feet, asks to tag along, but Sisko vetoes him. So when Nog engineers a planetside profit scheme that involves tampering with the shuttle to avoid being detected aboard, Jake’s interest is more than a little piqued. After all, Dad will be away at a diplomatic conference for a few days; Jake ought to be back by then; who will be any the wiser?

Thinking himself alone, Bashir indulges in some secret agent roleplay that amuses the boys.1I don’t recall if Bashir’s interest in secret agent stuff was ever mentioned before “Our Man Bashir”, but if not, Stowaways beat the show to the punch on that idea by about 18 months. Even as they tail him from a distance in the city, they feel like they’re eavesdropping on private playtime—that is, until he chats with a Bajoran named Tikar Antol and leaves with him in a transport. As the hour grows late without his return, Jake begins to worry.

Their conversation about Tikar catches the attention of a merchant girl named Atira Sesana, who knows enough to know the name doesn’t mean anything good. Sesana tells Jake and Nog that Bashir has most likely been taken to the Scar, a former Cardassian strip mine now being used as a base by the Turnaways, a sect of nonbelievers led by Tikar who reject all Bajoran religion and oppose the interests of Bajor’s spiritual leaders—interests like, e.g., joining the Federation. For now, Tikar remains tolerated in Sakelo City, trading on good will he accrued during the Occupation, but the continued terrorist attacks and kidnappings are starting to put a noticeable dent in his Klout score. As Jake, Nog, and Sesana get deeper in the Scar and closer to the base, they become the only hope of preventing the assassination of the man about to ascend to Vedek and rescuing Dr. Bashir from the fate of being the messenger who eradicates all life aboard Deep Space Nine.

The Star Ghost stuck the landing so perfectly that any follow-up would have been hard-pressed to trend any direction but downward. Still, Stowaways dips a little further down than I had hoped. Its biggest problem is that it’s as dry as the desert its adolescent characters trek through. For a book that clocks in at just over a hundred pages, there sure is a lot of sitting and waiting, hemming and hawing, biding one’s time. Nog is a little more proactive, but up until the climax, it seems like Jake sits around twiddling his thumbs about as much as he would have if he’d stayed on the station.

Part of that feeling of uselessness may stem from the fact that Stowaways, unlike The Star Ghost, has a plot that is maybe too adult for it, such that it has to be kneecapped in order to be pressed into service in a kids’ book. Jake and Nog are constrained by genre conventions to solve on their own a problem that they really ought to at least try to rope an adult or two in on, regardless of what it might mean for later consequences. In fact, this could also work better as a Starfleet Academy story, where hyper-capable children who can outwit adults would be more of an expectation than a groan-worthy contrivance.

So when you compare and contrast a successful Jake/Nog story (i.e., The Star Ghost) with a not-so-successful one (this one), you can see where the difficulty in nailing the former comes from. It’s about identifying a challenge that lands squarely in the characters’ wheelhouses but also doesn’t patronize young readers or insult their intelligence. It’s an unenviable tightrope for the Deep Space Nine books to have to walk, made all the more unfair by the fact that their Starfleet Academy counterparts are by their nature exempt from it. Fair or no, though, it’s their row to hoe, and I’ll be interested going forward in seeing which authors succeed at managing this balance and which ones don’t.

Evidently they were poisonous

Not so fast! There’s no such thing as a poisonous snake. Snakes are venomous, not poisonous, and yes, there is a distinction. Poison is generally something you ingest, or that is secreted, whereas venom is specifically transmitted via biting or stinging. This has no positive or negative impact on my feelings about this book—it’s just a fun fact that will get you strange looks in polite conversation.3If you’re familiar with the old Sierra adventure games, one fun added benefit of knowing this is that it makes Cedric the owl not just annoying but wrong as well—the worst of all double whammies. (p. 32)

I do not recommend Stowaways. It’s got a handful of stray ideas that are nifty, but it’s a bit on the bland side, and it’s not a kind of adventure that characters like Jake and Nog are suited for. However, it’s an instructive failure: taken together with The Star Ghost, it indicates what sort of fundamental ideas are going to work for these books and which ones aren’t. Hopefully in the installments to come, we get more Star Ghosts and fewer of these.

NEXT TIME: Why, the interest alone could be enough to buy Debtor’s Planet