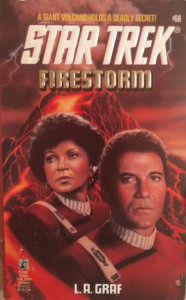 This week, when some familiar faces claim mining rights on a volcanic world, Uhura is the only person they’ll come correct for. But when the planet’s biggest volcano prepares to blow its stack, the situation induces a suspiciously specific bout of deja vu. Will the Prime Directive subplot matter? Would pointing out the joke in the shuttle’s name improve or damage morale? Is Chekov a worthy contender for most suffering Star Trek character? All this and more in Firestorm, the final book in the “Star Trek Novels I Owned As a Kid” collection!

Some months ago, we took a look at Ice Trap, the first Star Trek novel by the writers known collectively by the pen name L.A. Graf. Although that book had a plot thread starring Kirk and Bones and they were on the cover, they were the main characters only in a nominal sense. The real action belonged to the lower-billed officers: Uhura, Sulu, and Chekov. Firestorm, their third for Pocket Books, is so similar in structure that it borders on self-plagiarism. If you liked Ice Trap but wished it had taken place on a really hot planet instead of a really cold one, you will enjoy Firestorm—probably roughly equally, maybe a little more.

Nordstral is cold and busted; the new hotness is Rakatan, home to the galaxy’s largest volcano. Much is made of how long Rakatan Mons has lain dormant; do you think it might blow before the story’s over?? There’s also a scientist aboard the orbital station who believes the lifeforms living inside the volcano may in fact be sentient. Do you think that will be important later?? Actually, there’s no payoff for that idea. At best, it’s a pocket ace that, if true, Kirk can play in order to invoke the Prime Directive and get the aliens claiming dilithium mining rights to the planet to go home.

And which aliens might those be? None other than the Elasians, last seen in the season 3 episode “Elaan of Troyius”, in which the Enterprise had to escort the, uh, high-maintenance titular character to an arranged marriage. Elaan died a few months prior to this story defending Troyian dilithium from raiders, and the new Dohlman, her sister Israi, is a mere whelp, not having even cried the Elasian tears of maturing that put men under a trance of helpless love-stricken obedience. Israi’s insistence on speaking as a peer only to other women puts Uhura in de facto charge, and the ease with which the Elasians take offense slows things down further.

When the Elasian armada shows up and starts firing on the observatory, the action is divided into halves. Up in space, Kirk tries desperately to curtail a flagrant act of war. Planetside, Uhura, with her cohort of Sulu and Chekov, endures earthquakes and showers of ash while evading Israi’s bonded goons in an attempt to keep her alive and safe. Israi matures during a shuttle crash, and when Sulu makes contact with her tears while bailing her out, he becomes her bondsman as well, adding another major complication to an already gigantic mess.

Firestorm is functionally the same story as Ice Trap, but it has some small yet crucial differences that give it a slight edge, in my opinion. The main one is the increased attention to lore; Ice Trap doesn’t rely on any past episodes to fortify its story, but if “Elaan of Troyius” isn’t fresh in your memory, you’re liable to stumble a fair bit through Firestorm. The refresher is well worth it. That story is continued in singularly strong fashion, drawing narrative strength from the full scope of the episode rather than simply using it for easy “Hey, I remember that one” points.

Firestorm also benefits from having stronger supporting original characters than its counterpart. Israi is a brat, to be sure, but she’s a shrewd one, and shows a lot of extra dimension as she comes into her own and finds the approach that will make her a good leader for her people. There’s also a geologist, Scott Mutchler, who tags along with the landing party; he whines and gets in the way a lot, but his character arc ends on a decently resonant emotional note. I also enjoyed Israi’s bondsman Takcas, an all-around upstanding dude.

Because of the extreme similarity between the two stories, it’s really only necessary to read one or the other—and so, given that, I’d give the nod to Firestorm. Besides the differences I mentioned above, it’s simply better written as well. The typeface is smaller, so you get more story for your buck, and the extra word count is put to reasonably good use. Neither story quite reaches the topmost tier of quality, but this one gets just a few inches closer. It’s always fun to hang out with the less-heralded bridge officers, and Firestorm is no exception.

I recommend Firestorm. Structurally, it’s so identical to Ice Trap that it risks being written off as a redundancy, but it’s got a few minor differences going for it that make it the slightly superior of the two. Most notably, it’s put over by a strong attachment to a previous episode, which the former lacked. Only completionists should read both, but the investment in lore and the well-executed emotional beats make Firestorm the choice for anyone trying to decide on one or the other.

NEXT TIME: Odo and Quark have the house to themselves in Fallen Heroes