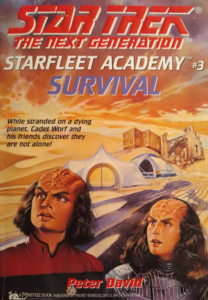 This week, while we’re all cooped up inside on account of the pandemic, Worf and his team are stranded outside in the desert heat. But when the attacker they capture escapes his bonds, they’re going to get more to drink than they asked for. Who’s holding up the best? Who’s going to be the most embarrassed when this is all over? Does Mark McHenry have excellent parents or terrible ones? All this and more in Survival, the book that needs to review its Pokémon weaknesses.

Picking up right where Line of Fire left off, tensions are running high among the Starfleet cadets and Klingons stranded after the attack on the Dantar IV colony. Everyone is sweaty, hungry, and thirsty, and Zak Kebron is still throwing hands at every Klingon that even slightly cheeses him off. But for Soleta, a Vulcan, it’s downright balmy outside, and while strolling the area near their camp, she finds the wreckage of the ship they just phaser-cannoned out of the sky. An unknown assailant attacks her, and she just barely manages to take him down even with an extra-strength nerve pinch.

Much to Zak’s chagrin, the attacker is a Brikar. Worf asks Soleta to do a mind meld, obviously oblivious to what a big ask that is, but since it’s better than the Klingons’ idea of torturing him, she agrees to it. The Brikar, named Baan, reveals that his people are tired of doing things the Federation way. They want unlimited expansion privileges, and a fleet is on the way to, ahem, “discuss” the matter; Baan himself ran the colonists off Dantar IV because the Brikar have a hidden base there they apparently wanted to start using again.

Starfleet certainly can handle the Brikar armada, but for a handful of cadets and Klingons, even one presents a challenge. Baan breaks free of his bonds, appears to kill one of the Klingons, incapacitates Mark McHenry, and activates a failsafe that floods the hidden base, which the kids are inside exploring. Once again, the cadets set about earning that Dream Team nickname as they put their heads together and try to figure out how to stop a madman on the loose and keep “Cause of death: drowned on a desert planet” from appearing in their obituaries.

After two books that were solid enough, if not exactly in my demographic, it feels like the Cadet Worf trilogy finally starts losing steam in this one. Survival is kind of screwed by the young-reader format; apart from the climax, there’s not a lot of meat on its bones, and it’s clear it would have been better off being the second half of a single volume. As has shown to the par for the course, the short page count once again means that some characters are liable to get short shrift in the matter of proper development. It’s another hundred-and-change pages of uneasy alliances, racial tensions, and big action setpieces, and it’s good that this arc draws to a close here, because the returns are really significantly diminishing at this point.

This is a little bit what I was afraid of with these YA books: that they would be thin gruel, that there simply wouldn’t be a whole lot to talk about. It’s to Peter David’s credit that it took until the third book for that worry to manifest, but I’m not about to force the usual word count. Most of my feelings about Survival are fairly straightforward and start with “not as”—i.e., it’s not as good, not as fun, not as well-executed, as what came before. It’s a shame the last book of the Worf triad didn’t quite stick the landing, but alas.

I do not recommend Survival, although if you read the other two, it’d be kind of silly not to shoot for the hat trick. The trilogy simply runs out of gas at this point, and in general isn’t as engaging as the others. The next kid-lit adventure moves the action over to Deep Space Nine, and not a moment too soon; a change of locale and focus will hopefully recharge this line’s batteries quite nicely.

NEXT TIME: Volcanoes and tempers are both ready to erupt in Firestorm