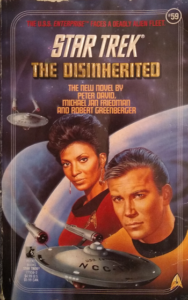 This week, Uhura gets hand-picked by Starfleet for an assignment that actually uses her degree. Meanwhile, the rest of the crew tracks down a band of raiders laying waste to a string of colonies, and a nervous novice named Pavel Chekov gets thrown straight in the deep end as he learns the ropes of life on a tour of duty in deep space and the do’s and don’ts of bridge protocol. Why did Uhura get into communications? Will she be swayed into staying aboard her new ship permanently? Can Lt. Baila and Chekov get their respective acts together before their next performance review? All this and more in The Disinherited, the book that proves three heads are better than four.

Uhura is selected by Starfleet for a special mission that will push her formidable linguistic talents to their limit: decipher the language of the Rithrim, an inscrutable combination of verbiage and hand signs, and determine their reasons for wanting a Federation-built deep-space observation post as well as help averting another unspecified disaster. She serves for the duration of the mission on the USS Lexington under Commodore Robert Wesley, a gregarious commander with an eye for exceptional officers and a reputation for persuading them to make their temporary transfers permanent.

Once she’s off on her thing, the Enterprise departs for the Xaridian system to investigate the destruction of the colony at Gamma Xaridian II—the latest in a spate of such incidents, which have been carried out by a band of raiders with speedy ships and mysterious motives. Kirk gets in touch with the nearest civilization, the Parath’aa three planets over at Gamma Xaridian V, who think that a Constitution-class ship waltzing into the neighborhood means they’re being reconsidered for Federation membership now that they’ve improved their treatment of protesters.1Instead of putting them through protracted torture before killing them, they now simply execute them on sight. Much more humane! Kirk hopes to use this amusing surprise as leverage somehow, but the meeting goes nowhere and they walk away with the same amount of information they had before.

Back on Rithrim, during a conference with the Rithramen governors, Uhura notices a group of builders destroying a certain set of carvings and begins to suspect the Rithramen are trying to sweep something unsavory under the rug. While she chews on that puzzle bone, she also tries to crack a tough nut named Jerome Baila, the Lexington’s own communications officer. Wesley confides in Uhura that Baila’s performance has slipped to the point where his job is in jeopardy, and Baila harbors festering resentment that manifests not so much in a feud with the commodore, but more sort of just ugliness in his general direction. Meanwhile, the Enterprise locates and engages the raiders—and promptly gets its butt handed to it. The crew must figure out how to contend with the raiders and divine their purpose before another skirmish reduces the Enterprise to atoms.

The Disinherited is the second collaboration between authors Peter David, Michael Jan Friedman, and Robert Greenberger, coming in just shy of two years behind the TNG novel Doomsday World.2Carmen Carter (The Children of Hamlin) was also on hand for that first one, but according to Voyages of Imagination, she opted out of working on a TOS story because she only liked TNG. That could explain why Dreams of the Raven sucked so much. She may also have been working on the TNG event novel The Devil’s Heart at the time, which we’ll get to before the end of this year. That book was decent, though not especially memorable. I was fairly kind to it at the time, but I recall it now as more boring than the impression my original review gives off would suggest, and it suffers from a combination of weak individual components and too many fingers in the pie. I’m not sure what changed in two years or how subtracting just one author made for an exponentially more cohesive story, but The Disinherited is absolutely amazing.

Much of The Disinherited‘s greatness derives from its being an outstanding showcase for the secondary senior officers. Aside from the obvious aspect of Uhura getting her own excellent plot line, this is a big story for Chekov as well, who’s on his first serious mission as a member of the bridge crew and is struggling to impress his superiors and adjust to life on a five-year mission in deep space. When the Enterprise engages the raiders at Gamma Xaridian VIII, Chekov suggests a maneuver that Kirk promptly vetoes. When Chekov presses the matter, Kirk relieves him of duty. Chekov spends much of the book with a mostly (though not entirely) self-hung sword of Damocles over his head, a bundle of nerves that anyone who’s ever dreaded a performance review or agonized over the career-ending potential of one wrong move will empathize with.

Intimate stories of personal growth focusing on second- and third-string characters are increasingly becoming my favorite subset of several genres, not just tie-in sci-fi, and for every one I read and enjoy, I crave three more. I’d argue that this sort of thing is what Star Trek does best, ahead of even the optimistic hopes for humanity’s future that most associate with the franchise. Uhura slowly penetrating Baila’s stone exterior and helping him overcome his guilt, resentment, and self-flagellation to realize his true potential, along with Sulu gently mentoring the beleaguered Chekov, are both top-notch storylines executed perfectly, but getting them both in the same novel is the truly outstanding achievement.

There’s also a lot of good tactical action in this book. The Enterprise is too big and slow to take the raiders on directly, so Kirk and his team have to get creative with solutions for overcoming them. This sort of thing just doesn’t happen often enough in these books, and it serves as an exquisite cherry to the delightful character beats. Did Michael Jan Friedman get weird with the apostrophes again? I can’t remember. Probably. But I don’t even care! That’s how good this book is. It’s astounding enough when one author understands so well what makes Star Trek work. But when three authors can come together and realize a vision that unified? That’s dang near a miracle.

I give The Disinherited 4.5 out of 5 sleek raider ships. Clearly, with these collaborations, the second time was the charm. The Disinherited is a great showcase for the non-power-trio bridge officers, getting almost “Lower Decks” levels of cozy, with plenty of room left over for some excellent space battle sequences. Amazingly, this isn’t even the final one of these. There’s still a Deep Space Nine collaboration in the offing!3Though it didn’t come out until 1997, and is still roughly two-and-a-half years away at the current pace of reviews. Would that all works by more than one author held together this strongly.

NEXT TIME: Pack your bug spray for Imbalance