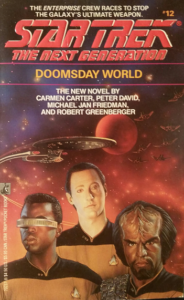 This week, four authors of varying notoriety in Trekdom join forces to deliver a book that any given one of them honestly probably could have written just fine on their own. Geordi, Worf, and Data get dropped off on Kirlos to assist a former teacher of Geordi’s in an archaeological dig, but when their presence in the vicinity of two explosions makes everyone think they’re terrorists, the make-out plans Geordi barely knew he had go on indefinite hold. While the gold-tunic’d trio work to clear their names and prevent war, Picard mounts a rescue effort for another planet under attack and gets a shocking amount of guff for playing a hunch. Who wrote which parts? Are four heads better than one? Should you go through with ideas you have at parties? What’s going on underneath Kirlos? And how would you seduce Data? It’s the book that didn’t have enough in the budget for Tellarites.

Usually, in the world of television and film, it’s considered a bad sign when a screenplay is credited to multiple writers. To name but one example, the Super Mario Bros. movie, an infamous fiasco, came under the pen of six different screenwriters (at least) before being ultimately credited to three of them. Without a unified voice, a work of fiction can flounder, go off the rails, or make no sense, and it’s as liable as not to do all of the above. Does Doomsday World prove the exception to the rule? Or do too many cooks spoil the gagh?

Doomsday World starts with something we haven’t seen in a hot minute: an introduction. The idea for the book came into being at a Trek authors’ party, and as we all know, ideas you have at parties are always really good and should definitely be acted upon. With the basic premise locked in, a quartet of collaborators, whom the back cover heralds as “four of Star Trek‘s most popular and respected authors”, set to work. I may not be the best review writin’ guy, but one thing I’ll never do is blow smoke up your butt like that quoted phrase. “Popular” and “respected” have nothing to do with “talented”, so allow me to provide more honest assessments on the four authors involved here. We have Carmen Carter, whom I haven’t been a fan of so far; Peter David, who is quite good; Michael Jan Friedman, who so far also hasn’t been great; and Robert Greenberger, who to this point had not written a Trek novel to date but had edited various sci-fi magazines as well as TOS and TNG comics for DC. You’ll forgive me if I was a touch skeptical going in.

The Enterprise is checking out archaeological finds from Kirlos, an artificial planet built by a race called the Ariantu, who evacuated long ago when radiation levels began to spike. In a somewhat unusual away team configuration, Data, Worf, and Geordi comprise the landing party, the latter requested specifically by Nassa Coleridge, a former mentor of Geordi’s who hopes to get some use out of his VISOR while he’s in the neighborhood, and perhaps some of his other tools as well if Geordi plays his Parrises Squares right, if your sensors detect what I’m laying down.

Kirlos manages an uneasy peace, overseen jointly by the Federation, represented by an Andorian woman named Stephaleh, and the K’Vin Hegemony, a species resembling nothing so much as non-union-equivalent Tellarites, represented by one of their own, Gregach. Geordi, Worf, and Data stay on the planet while the Enterprise assists another world currently under attack, but become prime suspects when they show up in the vicinity of explosions in both Federation and K’Vin territory.

As diplomatic relations begin to crumble on Kirlos, Geordi, Worf, and Data work to escape from custody and get their names cleared before conflict erupts and more blood is shed. Meanwhile, Picard becomes convinced that a rare type of marble known as arizite is the impetus for the attacks on the other world, Tehuán, and has a suspicion that Kirlos is next. Curiously—and more than a little distressingly—the rest of the crew doesn’t have his back on this hunch, and whiffing on it is the kind of mistake that could cost him his command, so this is actually kind of a high-stakes B-plot for Picard.

Of course, with four thumbs in the pie, it’s natural to amuse oneself by trying to determine who wrote which parts. Carter and Greenberger don’t have strong enough authorial voices for me to be able to pick them out. I assume anything that made me laugh, such as the part where Data gets propositioned by an alien sex worker, as well as much of Worf’s dialogue, was contributed by Peter David. Friedman gave the book its final coat of wax, and his vibe is certainly apparent in assorted passages; I’d bet an entire paycheck he was responsible for naming the K’Vin Hegemony, given his weakness for superfluous apostrophes.

Among the more interesting elements of the story is the Sullurh, an alien race native to Kirlos devoted largely to acting as administrative assistants for the Federation and K’Vin. However, they spend their off hours doing a lot of highly conspicuous whispering and scheming. It’s obvious they’re up to something that’s not kosher, though the exact nature of what that is comes into focus very gradually. Although their manipulation of their superiors is so obvious and their obsequiousness so cloying that you want to yell at the ambassadors for being so easily played, coming to understand just what exactly their deal is nevertheless one of the more satisfying revelations the book offers up.

Almost any way of expressing my honest feelings about Doomsday World is going to sound like I’m damning it with faint praise, but the reality is it could have easily been a disaster but wasn’t, which is a big relief. It’s a perfectly decent and serviceable story, perhaps a little on the boring side at times, though far from bad, and although I’m not certain it was totally necessary for four people to have been involved in its creation, it didn’t fall prey to any of the usual pitfalls related thereto. What matters most, I suppose, is that they all had fun, which is apparent enough throughout, and sufficient (for me) to justify its existence.

This week’s Ten Forward Toast goes out to Nassa Coleridge, who dies mere moments after Geordi starts warming up to the idea of getting hot for teacher. What can I say? The dude just cannot catch a break when it comes to the ladies. Maybe we should pour one out for Geordi’s love life as well.

I give Doomsday World 3 out of 5 slabs of arizite. I’ll admit I had moderately low expectations for a collaboration involving four writers, but they carried it off decently well. No one voice overwhelms or derails the overall tone. It is at times a bit of a nothingburger, but it’s never bad. And evidently it sold quite well, enough to inspire another group effort, The Disinherited (this one a TOS tale), featuring all the same authors sans Carmen Carter. We’ll reach that one in about six months, but for now, let’s turn our attention and anticipation to one of TOS’s finest event novels.