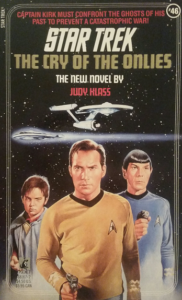 The Cry of the Onlies opens with three kids on a starship all by their lonesome. Jahn, the oldest, is nominally in charge: you might remember him as one of the mischievous youths from “Miri”, one of the earliest TOS episodes. After spending centuries frozen in age on the precipice of his teen years, Jahn has finally crossed over into adolescence … and it would be the understatement of the millennium to say he’s not handling it well. Jahn’s thoughts are severely disjointed, he gleefully destroys ships that are run by grups, and he yells at the other two a lot. Rhea, the only girl on board, tries in vain to rein him in, and Pal, the youngest, spends most of his time finding places to hide from Jahn.

After a palace tour designed to twist the knife some more, things slowly start to pick up. Kirk hits it off with Tamara Angel, the minister of interplanetary relations, and McCoy’s medical aid, while slightly out of line, instills a great deal of hope in the overworked Boacan medical team. But all their wonderful progress gets dashed on the rocks when a ship transporting the minister of Boaco Eight gets blown to smithereens by an erratic attacker, and suddenly things are back to square one. Not even square one—more like square negative twelve.

At this point, the Boaco Six stuff goes entirely on the backburner. Incipient war is bad, but even worse, apparently, is learning that the ship that launched the wild ‘n’ crazy attack is also carrying an experimental cloaking device prototype that not only hides a ship but fools other ships’ sensors with false images and readings. Kirk gets in touch with the device’s creator, Flint, the immortal man whose android companion he memorably macked on in “Requiem for Methuselah”.

This split focus does weaken the book, though not significantly. It would have been much stronger if it had only been about Boaco Six or only been about the cloaking device and the Onlies, but since I’m given to understand that Klass padded it out at the behest of her editors, I’m willing to forgive its thin-spread nature somewhat, because the actual writing is fantastic. Last week, we looked at The Captains’ Honor, which brought the TOS episode “Bread and Circuses” forward a hundred years into the world of TNG, but didn’t have any real ideas about it and shed less light than, say, a simple general contrast between TOS’s cowboy diplomacy and TNG’s more bureaucratic nature would have. Conversely, the callbacks in The Cry of the Onlies feel well-considered and chosen to advance a specific point. They don’t necessarily all come together in one grand unified point, but they feel of a piece in their respective meditations on aging and maturing.

Of the book’s two discrete sides, I prefer the Boacan half. “Miri” is, in this specific case, an interesting choice for revisiting, because in a lot of ways the Council of Youngers feels like the anti-Onlies. Instead of wallowing in their childhood and playing “foolies”, they’re taking matters into their own hands: educating themselves and the populace, shredding the red tape, solving problems immediately and with urgency, and making the reversal of injustices their highest priority. Of course, they aren’t perfect—their naivete prevents them from truly grasping the unscrupulousness of the Romulans and the violence of the Klingons—but the best parts of the book are in those moments of realization and in watching the Enterprise crew nudge them toward their best selves.

No matter where you’re at in the book though, it’s bound to be colored by tragedy, whether in the form of senseless death, lost connections, misunderstanding borne of miscommunication, or loss of innocence. It’s rare for a Trek novel of this era to be so thoroughly suffused with that kind of thing, though at the same time it manages never to wallow and overall isn’t a downer. Klass’s pensive reflections on characters who are grappling with the forward movement of unnaturally protracted lives are a flavor of Trek I can really get down with. She runs the full gamut, taking a grim view of the Onlies’ rehabilitation in her extrapolation of its logical extreme but finding the joy in Flint finally approaching the beginning of his mortality.

The Cry of the Onlies was one of the last Trek novels I read on a capricious whim before beginning the rigid reading order of the Deep Space Spines project in earnest, and I remember strangely not caring for it all that much at that time. These are the times when doing this site pays off: upon reaching a book I’d previously cultivated this or that opinion about and written off, I end up reevaluating it and changing my mind, sometimes, as in this case, for the better. There’s lots here to chew on, and it’s fairly gritty for one published in this era. I think you have to have a solid foundation of show knowledge under your belt to really get the most out of this one, or at least of these episodes, but you’re well rewarded for it.

So I’ve decided to debut a new segment this week. Death happens all the time in Star Trek, and there’s not always a place in these reviews to talk about it—sometimes it doesn’t even really fit in the Nuggets section. So whenever a character dies a particularly gruesome, senseless, or emotional death, we’ll commemorate them with a Ten Forward Toast. This section won’t appear in a review if there are no especially noteworthy deaths in the book.

Note that this section may contain spoilers depending on the unexpectedness of the death and how well we got to know the character.

This week, we’re pouring one out for Glen and Hiroshi, the two guys running the ore freighter that Jahn destroys for literally no reason (other than the boy ain’t right). Just two guys, sittin’ around, bored, making pie-in-the-sky plans for the future, and they get blown to smithereens. They don’t even get the dignity of getting monologued by their attacker. Senseless and tragic. And so here’s to Glen and Hiroshi, two men cut down before their time, whose dreams were crushed almost the exact moment seed touched soil by forces beyond their ken. Depressing.

Michaels had not spent much time on any intermediate vessels. A well-liked and hardworking student at the Academy, he had struggled to live up to the flash of genius he had shown in early childhood, and had convinced his teachers of his precocity.

Not gonna lie—that hits me right in the ol’ glowing red weak spot. Despite being a huge Star Trek fan (obviously), I’ve never fancied myself Starfleet material, as I’m sure some do, because if I’m really honest in my self-assessing, I’m far more an Ensign Michaels than, say, a Riker or a Geordi or even a Wesley Crusher or Harry Kim.

I give The Cry of the Onlies 4 out of 5 stolen experimental cloaking devices, which might be a little generous considering too much being crammed into too little space dilutes its potency, but I was genuinely impressed by it and enjoyed the heck out of it. This is a remarkably solid first effort. Klass is an author who showed her work. References and callbacks feel well justified and thoughtfully considered. A strong theme emerges and remains in focus even as the story bounces from one idea to another. If it didn’t depend so much on prior knowledge of specific episodes for maximum enjoyment, it might even be an easy recommend for casuals and/or non-fans.

It’s astounding that Judy Klass was only 22 (!!!) when The Cry of the Onlies was published. This book is proof that, had she so chosen, she could have easily gone on to an illustrious career in Trekdom, but a cursory glance at her website reveals her to be one of those dilettantish talents who likes to try lots of things. I feel a sadness similar to the one I felt with Barbara Paul and The Three-Minute Universe, knowing this strong outing will be the only one we ever get from her.

NEXT TIME: Prepare to have your face melted off by The Lost Years