I originally had this one slotted lower, but it has taken up so much of my time and energy that I moved it into the top slot: 20XX, a game I bought on Steam last week (it was on sale and the price was right). Bascially, 20XX is Mega Man X, with everything Mega Man games tend to entail, and also with procedurally generated levels. You go in for a run, beat as many bosses as you can, and then buy upgrades with the Soul Chips you earn that from then on may then appear in future runs. I bought this last week and have already sunk 12 hours into it, which I always think of as time I could have spent writing. I haven’t had a game sink its hooks into me this deep in a hot minute—probably the last time was with Stardew Valley. If you like Mega Man-type action, I can’t recommend this enough.

On my day off last week I caught Sorry to Bother You on Hulu, which I decided after I heard someone else rave about it. All I can say on this one is, it’s best if you go in blind.

A few things I feel like I can say about it without spoiling too much: Sorry to Bother You might be the most insane movie I’ve ever watched all the way through. Tip-of-the-iceberg plot synopsis: a black man working at a telemarketing job discovers he can rise rapidly through the ranks when he uses his “white voice”. His newfound success soon gets him promoted to a private floor and invited to an outrageous corporate party, where he stumbles onto a secret that will change the world. It is the most vehemently anti-capitalist piece of media I’ve ever seen. It is kind of amazing that it even got made at all. When you are done watching it, you will never ever ever want to work for a mega-corporation. Ever.

Here was my thought progression while watching Sorry to Bother You: “Hmm, it says it’s classified as science fiction, but I’m not getting a whole lot of that off of it. Sure, the ‘white voice’ thing is played up, and there’s the visual punnery of his desk literally dropping in on people he’s calling, but I’m not seeing it. Man, this movie is like half over, are they sure th—OH GOOD LORD WHAT THE F—”

It might not be for everyone, but it gave me a lot to chew on. 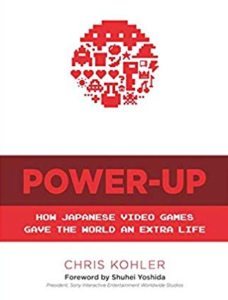 An online gift exchange I participated in landed me three books about video games, so you might see more than a little about that subject in this space in the weeks to come. My first choice of the three was Power-Up: How Japanese Video Games Gave the World an Extra Life, originally written in 2004 by Chris Kohler and reprinted with an additional chapter in 2016, and of which I’m reading a few chapters at a time here and there. A lot of it is stuff people who are really into older games are likely to already know (with the occasional truly surprising nugget of information), though it’s nice to have it compiled into a concrete source. If you aren’t so familiar with the history of games though, this is an excellent introduction. What it does best is remind you just how revolutionary those old Mario platformers and RPGs were, which can be an easy thing to take for granted. Fortified with rare interviews and unique insight, this is the kind of book you need to read if you care about this kind of thing at all.