As the only mission to prominently feature Scotty in the landing party, expect a lot of gushing and waxing nostalgic over antique machinery, as well as regret when you have to strip those machines for parts to jury-rig solutions for moving forward. Progress in “Museum Piece” is somewhat stilted; you have to enter a security code every time you go through a door, and sometimes the door won’t stay open as long as you need it to or the code will almost work before suddenly malfunctioning, and you have to hold or blow the door open as the situation warrants.

The latter scenario culminates in arguably the game’s most impressive setpiece. Five or six inventory items are assembled to create a makeshift cannon that blows open an uncooperative door, resulting in a massive explosion and a mountain of property damage (that somehow does not attract the notice of the terrorists, who are only one room over from where all the destruction occurs). It’s a pretty impressive explosion—small wonder that it’s the image that represents “Museum Piece” in the end credits. 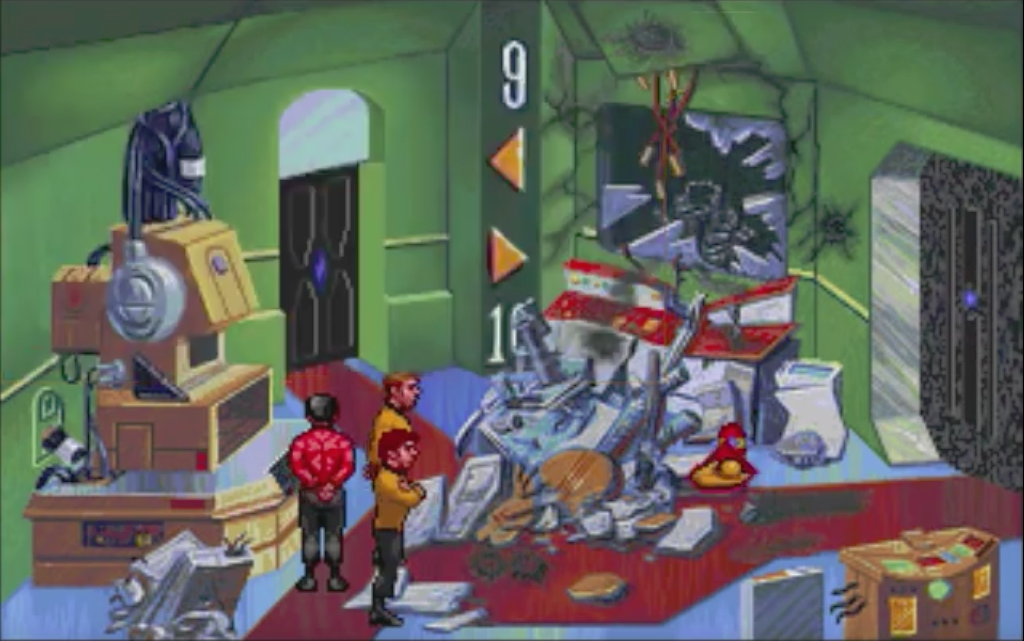 If Uncle Frank was here, he’d say “Look what you did, you little Kirk.”

At this point, you may be thinking: destroying a museum full of priceless artifacts and plundering them for working parts—not a great way to score well on a mission, it would seem. I would be inclined to agree. But it matters not a whit. There’s only one requirement you have to fulfill to get the top score on this mission: successfully negotiate with the terrorists.

Considered from the purview of post-9/11 America, this is all but unfathomable. Presidents left and right have refused to mince words, eliminating any margin for equivocation on the matter: “We do not negotiate with terrorists.” And even a reasonable forward-thinking progressive might well say, Well, why would we? Terrorists get what they want by instilling fear, by using violence as a tool. How have they earned the right to fairness and a civil discussion?

A sensible question in most circumstances, but not the path this game is hoping you take.

And yet extending them that right is exactly what “Museum Piece” expects you to do. This is the sort of thing Star Trek is optimized for. The Onacan family feel they have as legitimate a claim to the Quelque probe as the Seransi, and you must show patience, magnanimity, and humility in hearing them out and guaranteeing that the Federation will help mediate a solution. This is the longest series of dialogue trees in the game, and one mistake will make them hang up on you. You don’t need to save as often in Judgment Rites as in other point-and-clicks of the era, but this is one time when it’s best not to go in feeling too confident. This isn’t a series of choices you can really afford to plow through.

Anyway, the Onacans never actually kill anyone, and they make a few more entirely voluntary conciliatory gestures that strengthen their position, so as terrorists go, it’s a little easier to justify negotiating with them. But even though it’s the right thing to do, it’s still a tough pill to swallow even as I disagree with how imperialistic the country I live in currently is. Like, was it really necessary for the Onacans to take an entire museum hostage and booby-trap the security systems? Maybe it was. Maybe they wouldn’t have been acknowledged had they gone through the proper channels. I’ve never been in a situation where I was that desperate to be heard, so can I really say? There’s a lot to chew on in “Museum Piece”, and I’m not sure I’ll ever have one easily summarized opinion about it.

NEXT TIME: An inconvenient drop-in in “Though This Be Madness…”