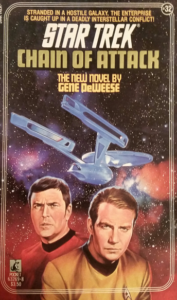 For the first time in recent memory, we’ve got an introduction. I think they fell by the wayside because authors realized we’re interested in our favorite crew and not their silly self-indulgent life stories, but mercifully it’s a short one. Still, even in only six short paragraphs, I found enough to give me pause (emphasis = my own):

“Over the years, it’s gotten ever harder to resist the temptation to watch the reruns, particularly when they’re showing gems like the Gary Seven episode, ‘Assignment: Earth,’ and ‘The Menagerie.'”

The Enterprise, as it often does, is investigating gravitational anomalies—the same ones, in fact, that previously flung them to the Mercanian system. An old proverb springs to mind: “If something has happened twice, it will happen three times.” Do the anomalies throw the Enterprise way off course? Let me ask you this: does a le matya poop in the desert? There you go.

This time, they’re not even in their own galaxy, and worse, whatever portal they traveled through doesn’t stick around to give them a chance to get back. Worse still, the crew is saddled with an annoying civilian, a character archetype we haven’t seen in a hot minute. In this case, it’s Dr. Jason Crandall, the head of the lab that manufactured the sensors the Enterprise was using to study the anomalies. Any quality you love to hate in your tagalong civilians—irascible, rude, petulant, thinks he knows it all—you name it, he’s got it in spades. Kirk is actually sympathetic to Crandall’s plight; the Enterprise, he notes, is one big happy family, and they all have each other to lean on in this uncertain time, whereas anyone Crandall would seek succor from is several galaxies away. So he encourages everyone to be super-kind and accommodating to Crandall, which turns out … well, more on that later.

The new galaxy is crammed to the gills with star clusters, so after trying a few times to find the portal and no-selling a defense buoy, they figure they may as well explore. They come to their first planet, and it is … well, “nuked to a crisp” might actually be an understatement. On to the next one, then! Oh, it’s been ravaged too. And so has the next one, and the one after that, and the one after that, and… It goes on like that for a full month, during which time even McCoy, the crew member most acutely attuned to human(oid) suffering, becomes desensitized to the horror.

Finally, they encounter another ship, observe it from afar, and use cat-and-mouse tactics to extract some survivors from the damage. The first one they bring out of the transporter matrix wakes up, freaks out, grinds his teeth, and explodes; upon realizing he had a saliva-activated detonator in one of his teeth, they don’t give the rest the chance to make the same move. After a mighty effort, the aliens finally talk. They call themselves the Hoshan, and they want Kirk to help them destroy their enemies. Kirk agrees to get right on that, just as soon as he lights the Prime Directive on fire and pees on the ashes.

They soon use the same hit-and-run method to beam over a representative of the other race, an avian people called the Zeator. He’s far more willing to talk, but likewise believes the other race to be responsible for the galaxy-wide wave of destruction. Once he has them all under one roof, Kirk prepares to do what he does best: have sex with them—I mean, uh, talk it out.

And talk it out they do. The universal translator pulls quite a lot of weight in this story, with DeWeese going to great lengths not to take it for granted, something I think can be easy to do, even though it’s indispensable in establishing footholds with new races. The universal translator may very well get more recognition here as an essential Trek invention than the tricorder, and it gets at least as much as phasers do, if not more (I wouldn’t be surprised). In fact, perhaps it does its job a little too well. Once the Hoshan and Zeator start chatting, they come to the conclusion that since neither of them have the technology to have ravaged all those planets, the Enterprise, a superior vessel to both of theirs, must have been the culprit—at which point Kirk makes getting the heck out of Dodge priority one.

Chain of Attack employs a simple yet effective trick to create and maintain tension, which is to put the Enterprise way far away from anything remotely familiar. I haven’t talked about this at length before, but I always really dig on it. For one thing, it puts the story in some very good company, raising its own value by association. Secondly, it makes the story unguessable in all but the most macro senses—i.e., you know they’ll make it home, but you have to discover the details along with the crew, because you don’t have anything more to go on than they do. Because of the nature of my interaction with these books, I have to take a lot of notes, so I like it when I can safely put the pen down and enjoy the ride.

That ride doesn’t always have its hills, valleys, and loop-de-loops placed where I like them, though. DeWeese holds the return home until almost literally the final page, and—barring an obvious cliffhanger—I prefer my stories to be at least mostly wound down with about twenty pages to go. Five pages away from the finish line here and they’re still in the thick of a tense space battle. Cuttin’ it a little close there, dontcha think, Gene?

And then there’s the matter of Crandall. I find him one of the more fascinating examples of the irritating jerk who gets dragged along on an adventure, not least of all because I’ve known people like him. Crandall cuts a tragic figure by being a tremendously awful judge of character, badly misreading nearly every major relationship dynamic on the ship and mistaking genuine charity and politeness for patronizing condescension. DeWeese devotes pages of long dialogue-less paragraphs to Crandall’s inner logic, painting a portrait of a small and pathetic man who has somehow lived an entire life without once being right about anyone or anything. I can’t say I have a lot of pity to spare for a guy who doesn’t see the error of his ways until the crew’s feelings toward him are literally inserted into his brain, but I found him riveting.

Chain of Attack is one of the more ambitious Trek novels to come down the pike so far, and for the most part I think it succeeds. Imagine a story that has dominant genes from The Abode of Life and recessive genes from The Wounded Sky and you won’t be too far off the mark. A book always has my attention when the Enterprise finds itself in completely unfamiliar environs, and DeWeese seizes on that initial attention grab well enough. He theoretically wouldn’t have had to put in much legwork to keep things interesting after the opening gambit, but thankfully, he continued to, and as a result his debut tale ended up pretty solid.

I give Chain of Attack 3.5 out of 5 saliva-activated detonators. Luckily, my initial misgivings didn’t come to pass. I still don’t like “Assignment: Earth”, but I do like the book written by the guy who does. Though it’s not without its problems, particularly in the home stretch, it’s better than most of the last few efforts. A fascinating original character, well-executed attention to the finer details of forging relationships with new races, and consistently high tension all contribute to making this one a fine recommendation.

All that and a sequel hook, too: at the end of the book, Kirk promises the Enterprise’s return to the Hoshan and Zeator’s galaxy will be a when, not an if. Come October, perhaps we’ll see more of them when we get to that teased sequel, The Final Nexus.

NEXT TIME: Become the master of your Deep Domain