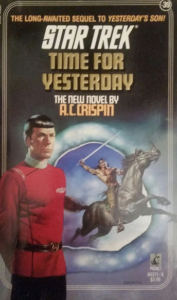 Today it’s time for Time for Yesterday, the sequel to one of only a handful of books from the earliest days of the Pocketverse that can unequivocally be called good. When stars begin prematurely going nova, an admiral gets the classic power trio back together to figure out why the Guardian of Forever decided to take a lunch break. But when their freelance help’s attempt at telepathic contact gets her Deebo’d, Spock’s best idea is to recruit his son for the job—but he’ll have to interrupt the Guardian’s DVR recording of Game of Thrones to pull it off. Has Spock mellowed out as a dad? Would the Guardian of Forever be a clingy friend? Can I get my name legally changed to Rorgan Death-Hand? It’s the book where our heroes are running out of time, until they aren’t.

Kirk’s mother just died, but the body’s still warm when Admiral Morrow gets in touch with him to share some alarming news: Alpha Centauri B is caught in a wave of time displacement, causing it to age rapidly, with no signs of slowing even as it approaches nova. (Actually, it’s been happening to lots of stars, but they’re only starting to care now that it’s happening near populated worlds.) Morrow gets the band back together to see if they can wake up the Guardian of Forever, who’s been radio-silent for the past six months. Spock suggests hiring a telepath—one more powerful than himself, that is—to give it a whirl, seeing as his son Zar managed it once upon a time.

So they round one up: D’berahan, a member of a race called the Marishal, who are basically short telepathic wallabies, which is exactly as cute as it sounds and then some. She “talks” in crazy-cool syntax, is working while pregnant, and in a pair of scenes that are way ahead of their time, Kirk and Spock discuss her pronoun preference both among themselves and with her. It seems like Crispin might have been trying to make her own version of a character like K’t’lk, and it’s a big hit with me at least. So then she opens her mind up to the Guardian—and gets Worfed so hard she doesn’t wake up until near the end of the book. What a bummer.

Spock boots up the Guardian in safe mode, and he, Kirk, and Bones spend a long time in the past in captivity before finally gaining an audience with Zar, at which point they spend a long time trying to talk him into returning to their time to restore the Guardian. That is one thing about this book, that Crispin isn’t afraid to let a scene simmer for a good long while. Time for Yesterday is in fact over a hundred pages longer than its predecessor, but Crispin correctly intuits that Zar, Wynn, et al. are characters we want to take time to get cozy with. Luckily, these conversations are never boring—everyone has matured immensely in the intervening years, and it’s especially a joy to see Spock take so much pride in the man his son has become.

Despite the fact that they could easily return him to the exact moment he left, convincing Zar to help them out turns out to be a tough sell. He’s got a lot on his plate now: running a kingdom, calling himself the Sovren, forming battle plans, trying to arrange a marriage of convenience that could get their butts slightly less kicked in the forthcoming battle, and fretting over a prophecy that says he’s going to die in said battle and that nothing short of being resurrected in full view of the enemy forces will secure his people’s victory. No sweat!

The best Trek novels tend to be the ones that have something deeper than just the adventure of the week going on. To that end, Time for Yesterday is about learning to take risks, especially when life has given you every reason not to. Circumstances have conspired to make Zar understandably conservative—first the death of his mother, then of his first wife and child at the deadly hand of, well, Rorgan Death-Hand—but he’s slowly drawn out of his funk by Spock and Wynn, his marriage to whom proves to be beneficial for far more than mere political maneuvering. Zar is a completely different character than he was in Yesterday’s Son, but he’s much more mature and layered now. So is Spock, for that matter; given the timeline of the story, his post-Kolinahr outlook is a lot more enlightened here than it’s sometimes been portrayed elsewhere.

Aside from the maturity and inner strength of the Vulcan leads, the thing that stood out to me the most about Time for Yesterday is how cleanly it’s set up. Though it’s got a fair number of open tabs, it’s not a multitasking sort of book. Problems are very distinctly solved one at a time. It’s tidy, but not contrived; uncomplicated, but not simplistic. The structure ensures a strong ending and satisfying closure, which stands out even more against the loosey-gooseyness that marked its immediate predecessor’s out-of-breath limp to the finish line.

Sadly, this is as far as we get to travel with Zar. A third book in the so-called “Yesterday Saga” was planned that would have been the first of a trilogy, but never saw the light of day—if I had to guess, most likely due to Pocket Books cracking down on the overt focus on original characters. At the same time, however, I’m looking forward to seeing what Crispin made of other ideas, since she’s now 2-for-2. We’ll see her next for the TNG novel The Eyes of the Beholders (not to be confused with the similarly named season 7 episode), and then the event novel Sarek (not the same as, again, the TNG episode of the same name), in which she looks one generation back rather than one forward.

I give Time for Yesterday 4 out of 5 cute telepathic marsupials. It’s nice to get to revisit a beloved original character while the editorial department still allowed that sort of thing, plus it’s nice to come back to Zar and see that he grew out of that whole snotty punk business (he and Spock are much more engaging as equals). The strong emotional maturity on display throughout the book is without a doubt its strongest point. There’s also a lot of crazy stuff in this book that I didn’t even touch on at all, like, for example, what happens when they finally bring the Guardian back … but you should really check that out for yourself.

NEXT TIME: Getting ourselves caught in a Timetrap