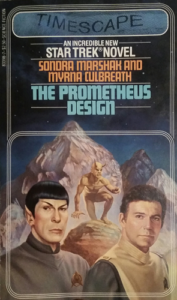 Ah, another sure-to-be-rip-roaring Star Trek novel. You know what I love about these adventures? I love how they overcome their differences to make things work. Kirk and Bones are emotional humans and Spock is a logical Vulcan, but they really care for each other and they never treat each other like garbage. Okay, here we go … okay … wow, all right … wow, that’s—that’s not very cool, Spock … oh jeez … okay then … hmm.

I think I need an adult.

The action begins planetside in medias res, with the crew being pursued by a race called the Helvans, who are at roughly a Stone Age level of development and look like horned demons, like the one on the cover. (The crew has had fake horns surgically grafted onto their heads by Dr. McCoy to blend in with the locals. Remember that, it’s going to come up later.) Kirk has unwisely split up the party, and he winds up in a dead-end alley where he gets confronted not by Helvans, but by short creepy aliens wearing masks with conical noses, referred to in the text as “no-mouths”, who give him a full-body probing from hell. Kirk feels intensely violated and loses time, and the void left is filled with intense feelings of rage and shame.

Soon afterward, an admiral is dispatched to the Enterprise, a Vulcan named Savaj who has some ideas in his head, both about what’s causing weird fits of aggression around the galaxy like the one the Helvans are having and about who should be bossing whom around when it comes to Vulcans and humans. He invokes a Vulcan thing called Rule of Seven, which Spock tells Kirk translates roughly to “You’re unfit for command for reasons that aren’t your fault.” Although the order isn’t punitive and won’t go on Kirk’s permanent record, it chafes him nonetheless; the only reason he’s only busted down to first officer and science officer is because of Admiral Nogura’s intervention.

Thus sets in motion a litany of humiliations, dress-downs, and emasculations of Kirk that will last until a little over halfway through the novel. One might imagine that, looking at Kirk’s track record from a certain point of view, the prospect of his being busted down or formally upbraided for foolhardy decision-making might eventually be bound to happen and/or be explored in a novel, but as put into practice here, it’s just dour and depressing. Spock and Savaj repeatedly dunk on Kirk and treat him so cruelly it makes “Plato’s Stepchildren” look like a wedgie—one that doesn’t even rip the underwear. Of course, it all ends up being part of a ruse devised by Savaj to attract the attention of whatever is studying them, but that doesn’t make it any more palatable or easier to deal with.

Savaj’s behavior is one thing, but why is Spock acting like such a dillhole? To answer that, we have to look at the times surrounding the book’s publication. This is very much a post-Motion Picture novel, with all that entails. You may recall from The Motion Picture that Spock returned to Vulcan following the successful end of the Enterprise’s five-year mission and spent almost three years trying to purge every last bit of his human side in a ritual called Kolinahr. He almost succeeded, but then at the last moment felt his t’hy’la bond with Kirk calling to him across time and space. Remember how back in the days of dial-up internet you would be downloading a song from Napster and it would fail at 99 percent? That’s kind of what happened to Spock.

So it’s logical to extrapolate that even in the wake of the events of The Motion Picture, Spock might feel resentment toward humans (or at least his own human half) for holding him back from achieving something he wanted. Kirk and McCoy even discuss at one point how it makes sense that Spock might feel constrained on the Enterprise since his subordinate position clashes with the fact that he can run mental and physical circles around the rest of the crew. But the whole idea is executed with such misery and relentlessness that it flirts with being unreadable. It’s not that Kirk doesn’t deserve some pushback every now and then, but it turns out it’s not a whole lot of fun to watch him get his shit pushed in over and over again. It’s possible to write stories where Kirk loses his captaincy that aren’t a total bummer to read (for instance, Prime Directive by Judith and Garfield Reeves-Stevens), but this is definitely one of the less successful examples of how to go about that.

Anyway, Savaj hypothesizes that a thus far unknown external force is experimenting on the galaxy at large with a sort of anti-Prime Directive—i.e., always intervene in primitive races’ development rather than never. He’s been off the grid for a full decade investigating this phenomenon, and only now is he finally closing in on concrete results. He and Spock beam down to Helvan to see what’s up, and Spock, against his better judgment, leaves Kirk with the conn. Of course, at the first hint that Spock is in trouble, Kirk and Scotty and a huge team of armed crewmen beam down to bust him out of the lab, which cheeses Spock off big-time, because with his strong Vulcan body, he maybe could have handled whatever intense process the no-mouths put their subjects through without dying and learned something valuable, but no, Kirk had to beam in and play shooty shooty hero man.

Kirk is a maverick and a loose cannon, and Spock tells him he’ll have his badge, but dammit, he gets results. He uses a personal leave from bridge duty to interrogate one of the no-mouths, who it turns out are just grunts who are simply following orders and who have families of their own that they care about. They commit unspeakable acts of violation on their subjects, but they’re ultimately too pathetic to get angry at. Kirk only gets to go on the subsequent landing party because he’s the only one who knows how to get to where they need to go and because they need that good old Enterprise crew rapport if they want to have any hope of identifying their experimenters.

Once they get deeper into the laboratory, things start getting really wiggy. Savaj and Spock finally start to lighten up on Kirk a little, probably because they’re all in a place where none of them really have much of an idea what’s going on. They meet a silver woman whose voice sounds like silvery bells named, uh, Belen, as well as a fiery woman named Flaem. Yeah, the fire-presence is literally just “Flame” with two letters switched around. I think I’ve seen more word-scrambling complexity on kids’ menu placemats.

Belen, Flaem, and their colleague Trath are conducting experiments on entire populations of planets in hopes of solving an eons-old question: can a species achieve greatness without aggression? The outbreaks of violence are increasing throughout the galaxy because Belen et al. are purposely ramping them up trying to solve the dilemma in order to save their own people. Belen thinks they should all just become energy beings like the Organians, but no one else wants to do that. Belen also falls for Kirk’s wiles and they smooch a few times, and Trath and Flaem scold her pretty thoroughly for that (from their POV, it’s kind of like making out with the rats in a lab experiment), which is another good sign that maybe these people aren’t all on the same page.

There’s a lot of philosophizing back and forth, but in the end, what the experimenters are looking for is proof that organisms can break free of their established routines and patterns. Much reference is made to Hell’s Kitchen, the old New York slum: horrific violence happens in situations of crowding and poverty, but when people are safely relocated from it, they want to go back for more. In a rather disturbing scene, the experimenters make Savaj and Spock ten feet tall, strip them of their autonomy, throw them in a fish-tank arena, and pit them against each other in ancient Vulcan combat, but under weird sort of training-mode parameters where they can hit each other super-hard but it doesn’t hurt or kill them. Kirk gets between them, forcing them to recognize him and breaking their hypnotic trance, proving that they can choose not to revert so much as to blindly kill. In Kirk’s case, they’re looking for him to truly accede command (the thing he loves the most and the pattern that would be the hardest for him to break) to Spock, and he finally does at the most pivotal moment, when it would have been bad news bears for everyone if he hadn’t.

So everyone passes the integrity test, and the extra-dimensional beings seek to find a different way to solve their problems and magnanimously agree to not shut off the lights on the experiment of the galaxy (an agreement with some ominous implications that don’t escape Dr. McCoy). Spock hands command back over to Kirk—he’s got his own pattern of preferring a subordinate position so that he’s free to do research and stuff—and a real headache of an episode comes to a close.

Personally, I found this a hard one to wrap my head around. I’m far from a dumb guy (I hope), and I like to think I can identify major themes and such, but I read this book twice and both times it felt really stilted and sometimes hard to follow the thrust of a conversation, especially the philosophical ones in the back half. You don’t generally need a Ph.D. to grasp Star Trek‘s Big Ideas, but because this book is dealing with weirder and headier stuff than usual, Marshak and Culbreath seem to have made the language a little more highfalutin to compensate. They only wrote one other Trek novel in the Pocketverse (Triangle, coming up in about a month), so it remains to be seen if the rarefied language is a function of the elevated nature of the story or if this is just how they write all the time.

It’s a different ☹️ sort of from The Klingon Gambit, which was more boring and just kind of came and went. Although it gets deeply weird in the back half in a way I wish Star Trek authors were willing to get more often, it is a whole lot of no fun to read. This book is not bad, per se, but rather unceasingly unpleasant. It has interesting ideas, but they’re couched in purple prose and shoved back behind a parade of humiliation and discord between characters we normally root for and want to like.

NEXT TIME: The Abode of Life