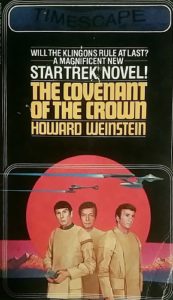 It’s Dr. McCoy’s birthday. He’s feeling every minute of however old he is, and a surprise party thrown for him by Kirk isn’t helping. So then, what better to put the pep back in one’s middle-aged step than an escort mission involving a bright young princess who wants to bring new meaning to the phrase “jump your bones”?

The Covenant of the Crown
Author: Howard Weinstein
Pages: 191
Published: December 1981
Timeline: Between Motion Picture and Wrath of Khan
Prerequisites: “Yesteryear” (TAS S1E2), “The Pirates of Orion” (TAS S2E1) (not mandatory, but they provide context for a few minor story details)

We’re now 3-for-3 on Priority One signals kicking off an original adventure, with this one sending the ship to the planet Shad. The worst-case outcome of a longstanding war is imminent. King Stevvin brought peace to the entire planet, boosting their economy by exporting a valuable mineral called tridenite to dozens of neighboring planets, but the Klingons noticed the seeds of discontent in a disgruntled faction called the Mohd Alliance and gave them weapons to retaliate. Kirk, then a young lieutenant commander, persuaded Stevvin to go into exile on a nondescript backwater world thinking the whole thing would blow over in just a few months. Eighteen years later, Stevvin and his daughter Kailyn are still hanging out on Orand waiting for the go-ahead to return to Shad, and the Mohds are finally gaining ground on the central palace. If Shad falls, so too do a bunch of Federation-claimed and neutral planets, and the Klingon Empire stands to expand its territory significantly as the worlds that depend on Shad for tridenite fall like a row of dominoes.

So if you’re keeping score, yes, you’re understanding that correctly: the Klingons set up better and more gambits in this book than in the actual book called The Klingon Gambit.

Stevvin, in rapidly declining health, decides to send Kailyn to retrieve the crown while acting as a decoy—more than a bit of a risk, it turns out, since she’s book-smart, but might not have what it takes to lead an entire planet of people, and also she has a chronic disease requiring daily injections. Spock and McCoy travel in the trusty Galileo shuttle to ice world Sigma 1212 to help Kailyn recover the Shaddan crown and almost immediately get waylaid by a clan of hunters, while know-it-all bureaucrats order the Enterprise to a halt to make Kirk sniff out the spy among Stevvin’s entourage of servants.

The Covenant of the Crown is the first Pocket Books Trek novel with some real pedigree behind it—not to slag Roddenberry, of course, but he was always less a writer than an idea man, and I believe his notions about Star Trek often got in the way of allowing it to evolve toward its best potential, and anyway there’s even debate about whether he even actually wrote the Motion Picture book (there’s a theory that it was ghostwritten by Alan Dean Foster, but to be honest I don’t know too many of the fine details about it). Anyway, Howard Weinstein is the one we’re referring to here as having the strong Star Trek bona fides; he was, and to the best of my knowledge remains, the youngest person to sell a Star Trek script, at age 19, for the Animated Series season 2 episode “The Pirates of Orion”, from which derives the choriocytosis disease that he reused for this story.

Like the novelization of The Motion Picture, The Covenant of the Crown has two introductions, one by Weinstein himself and one by David Gerrold, who sold the script for “The Trouble with Tribbles” at a similarly young age. The former, by Weinstein, is half “this is why Star Trek is culturally important” and half acknowledgments; halfway through, he sneaks in a nice little line about obsession where his mom would tell him the world doesn’t revolve around Star Trek, to which he replies, “Not the whole world, Mom, but some of it.” The latter, meanwhile, is a lot wackier in tone, but basically talks about Star Trek as a source of hope, offers a brief bio of Weinstein, and heralds him as a major talent. When I first read the book, I thought this pair of intros was grossly over-indulgent, and then gradually two things occurred to me: one, the book is actually good enough to withstand the scrutiny brought on by such a conspicuous amount of praise, and two, it’s possible this might have been intended as the first original Pocket Books story to be published, what with all the fanfare at the front end. The Entropy Effect makes slightly more sense as a maiden voyage for establishing the novelverse’s stakes, but this would have been a fairly swell start as well.

Once the story proper finally begins on page 17, it gets rolling pretty smoothly. The Covenant of the Crown works much better with its economy of pages than its immediate predecessor. The Kirk find-the-spy thread resolves pretty quickly and cleanly, so the majority of the book is spent with Spock, McCoy, and Kailyn. Those parts work best when they don’t overly emphasize the conceit of “a PYT helps a dejected old man feel young and vital again”, e.g., on p. 93 (“‘If only this was someplace else,’ he murmured with a sigh. ‘Well, I can’t be that old if I can still get a pretty girl to go camping with me'”). Unfortunately, more by dint of being a product of its time than anything, the McCoy/Kailyn dynamic bumps up against some yuckyness. Bones does eventually rebuff Kailyn’s advances, diagnosing her puppy love for what it is and letting her down gently, though not before she plants a very grown-up smooch on him that he’s not exactly in any hurry to push away.

Even though King Stevvin probably should have spent at least a day or two out of eighteen years in exile teaching Kailyn just enough sex-ed to not throw herself at the first middle-aged wrinklebag to come rolling into the neighborhood, Kailyn is still a well-crafted character. She’s got spunk and perseverance in spades, always pressing on through her chronic choriocytosis when you think she should have long since passed out for good, and her concern over not being able to guide her people is palpable and engenders sympathy. Spock and Bones are also in top form on their repartee, but they also get a really lovely moment together on page 116 taking in the scenery from high atop a mountain on Sigma 1212 that I wouldn’t hesitate to call the best scene in the book. If you don’t mind getting Star Wars in your Star Trek, it’s the sort of scene you can imagine “Binary Sunset” playing over.

This story also has something that the previous book lacked, despite having the word “Klingon” in the title and allegedly being mostly about Klingons: cool and interesting Klingons. Kon and Krail represent two distinct sides of the Empire, the gruff military rank-climber and the smooth intelligence operator. It’s unfortunate how easily the environmental hazards of Sigma 1212 lay waste to Kon’s group, because I really would have liked to have seen them pose more of a threat to the already beleaguered trio. Krail is delightfully smarmy, and it’s great fun watching him push buttons to get Kirk’s goat. I also enjoyed the sexual politics involved in Kon and Kera each silently mulling over the pros and cons of a relationship with the other, which shockingly managed to be less gross than the primary human dynamic explored in the book.

In the end, everyone who’s not a Klingon goes home happy. Kailyn matures sufficiently and achieves queendom, McCoy saves a mental image of Kailyn laughing for the spank bank, and we close the book (literally) on yet another rip-roaring extra-canonical Trek adventure.

This book supports the notion that you’re generally in better hands when you’ve got proven Trek talent behind the wheel. I’m not entirely convinced Dr. McCoy ever came totally to terms with being a role model figure to Kailyn rather than a May-December love interest, but it doesn’t drag the story down as much as it very well could have. Top-notch Spock/Bones interaction and Klingon portrayals improved over those in the previous book go a long way in securing this book a relatively high mark.

NEXT TIME: The Prometheus Design