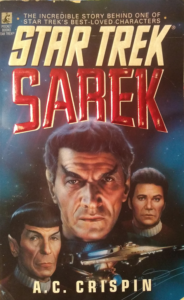 This week, Sarek has some primo dirt on the Romulans, but he needs help closing the deal. Meanwhile, when James Kirk’s nephew gets caught up in a movement to make Earth great again, he starts to wonder if real-world experience is more valuable than credit hours. Why are the Klingons spoiling for a fight so soon after Khitomer? Is this a bad time for Sarek to take a new gig? And can Kirk be cool with his nephew’s new girlfriend? All this and more in Sarek, the book that’s brought to you by Aunt Sylvia’s Kidnapper Chow!

Sarek
Author: A.C. Crispin
Pages: 404 (paperback)
Published: March 1994 (hardback)
Timeline: Shortly after The Undiscovered Country
Prerequisites: Familiarity with several series elements, up to and including: the relationship between Spock, his father, and his mother; events of certain episodes in both the Original and Animated series; and select events and characters of nearly all the movies, to varying degrees, most notably The Undiscovered Country and The Voyage Home, with The Motion Picture being the only real exception
Not to be confused with: “Sarek” (TNG S3E23); this is an original story, not a novelization of an episode

Against his aide’s advice, Sarek tries to confer with the leader of the Keep Earth Human League during a demonstration in San Francisco. The meeting descends into chaos, and in a moment of physical contact with the KEHL’s leader, Sarek realizes another Vulcan is psychically tapping into the man’s latent feelings of xenophobia and amplifying them. He confides in his aide that he believes the planet Freelan (a neutral but extremely secretive world in the Romulan Neutral Zone where the people hide their faces behind masks, conduct negotiations via telecom from orbit, ) to be a threat to the newly forged peace accord, and plans to go there and infiltrate their computers for ironclad proof.

Meanwhile, Peter Kirk—Jim’s only living relative, his nephew—is attending the Academy; on his way there, in fact, while the demonstration is going on. Peter’s a bit of a late bloomer, academically speaking, but he’s close to graduating command school, with only the Kobayashi Maru to worry about. But when he gets caught up in the mob, the KEHL’s second-in-command mistakes him for a true believer. Sensing a juicy addition to his extracurriculars, Peter decides to play along in hopes of picking up some solid intel for Starfleet.

Sarek confirms his suspicion that the Freelans are actually Romulans, but has to ditch his proof to save his hide. The next day he receives a message that Amanda is gravely ill and is not expected to make it another month. When Spock arrives at Vulcan, Sarek lays bare his theory, which is that the Freelans, who are always accompanied by Vulcan aides, have for decades been capturing Vulcans, forcing them to bear children, developing the children’s mental and telepathic capabilities without the usual ethical restraints, and using those children to bring people with low-level xenophobic thoughts to a tipping point where they decide to act on them. He also admits he saw a Freelan face 70 years before, but never told anyone, since he was in the throes of pon farr during a negotiation and couldn’t be sure he was of sound mind during the incident.

Events begin to dovetail as Peter gets captred by the KEHL woman he stole the intel (not to mention a few kisses) from and tossed on a Klingon cruiser. About the same time, Sarek accepts a direct request from Ra-ghoratrei to negotiate the release of hostages on the Orion colony Kadura, which has been attacked by—you get three guesses, and the first two don’t count—Klingons. Sarek must continue to put the pieces of the puzzle together even as he risks creating another rift between himself and Spock, who accuses him of abandoning Amanda out of a lack of courage to see her death through. At the same time, Peter racks his brain to figure out how to avoid being collateral in a blood feud, eventually staking his ticket to freedom on the legendary Kirk charm, which he works on his captor, a Klingon woman named Valdyr, who herself is none too thrilled by either her uncle’s designs on war or her impending arranged nuptials.

Whether intentionally or not, Sarek ended up serving as the swan song for the Star Trek writings of Ann Crispin, who died of bladder cancer in 2013. Although she gamely left open the possibility of writing more Trek novels in the book’s afterword, Sarek has such a feeling of finality to it that I personally believe she had no intention at all of doing so, at least at the time. When it comes to specific alien races, certain authors pull way out in front of the pack. John Ford defined Klingon culture (for about a year, but still); Diane Duane breathed unprecedented life into the history of the Romulans, er, Rihannsu; and Ann Crispin made her name on excellent portrayals of Vulcans—Spock and his son Zar in the Yesterday duology, Dr. Selar in The Eyes of the Beholders, and now Sarek in, well, Sarek.

There’s much more to this book than Vulcans, however. In fact, my favorite element of the story, the relationship between Peter Kirk and Valdyr, has nothing to do with them. Their chemistry is outstanding, and although the leap from one Kirk barely overcoming his prejudices against Klingons to another boldly going where no (human) man has gone before (until Tom Paris, anyway) in so short a time frame is a staggering one, it works. That’s because it’s not merely a continuation of the family tradition of boning down with alien ladies. Peter’s love for Valdyr is genuine, a relationship I openly rooted for. I kind of wish there had been a little more of the elder Kirk wrapping his mind around it, but this book isn’t about him, so I respect that decision.

What Sarek demonstrates more profoundly than anything else is that Amanda Grayson is the glue of that family unit. Even as Spock seethes with human rage over what he perceives as Sarek’s abandonment of his dying wife, Amanda gently exhorts him to be more understanding. The arc of her life is also described in journal entries peppered throughout and read by Sarek in his down time. The best stories about Vulcans tend to be ones in which they’re hoisted by their own petards with regard to their own estimation of their self-control. Vulcans like to tout themselves as stoic and eminently logical, but the journal entries make it clear that Amanda has had to have far more patience with them than they have with her. They’re very well done, collectively forming quite the monument to the character.

I also appreciate that Crispin respected the character of Amanda Grayson enough to not try to undo her death in some kind of gimmicky comic book way. Most Star Trek novels up to a certain point are islands unto themselves, but Sarek feels like a rare example of an early novel that tries to build bridges to canon rather than burn them. We know Amanda has to die sometime, since Sarek is married to Perrin in TNG. It’s as logical a question as any to say “Why not now?” The end of the book also sets up Spock’s professional relationship with Pardek, providing the basis for a solid bridge from Sarek’s diplomatic career to Spock’s.

Authors who write very few Trek novels over the course of their career sometimes end creating a more cohesive body of work than those who write several. Across just four books, Ann Crispin gave us Vulcans at  their best and at their lowest. It’s Sarek, though, that feels like the most radiant celebration of them since Spock’s World. Yesterday’s Son is also outstanding, but Sarek feels like the work of an author who truly understood Star Trek literature’s changing relationship to the canon and navigated the sea change elegantly and flawlessly. It’s a thick read, but unquestionably a worthwhile one.

I strongly recommend Sarek. It’s a powerful and unflinching character study of a man who’s every bit as fascinatingly flawed as his son, and the supersized serving leaves room for some other excellent arcs as well. It allows its pivotal moments to use their full power and works with canon better than most of its contemporaries. And despite the title, it’s as much Amanda Grayson’s story as it is her husband’s. I’d say Spock’s World is still the definitive treatise on the history of Vulcans, but Sarek is a more intimate story about this one family unit, and it fits companionably alongside it to make a strong double feature.1Evidently someone at Pocket Books thought so as well: Sarek was paired with Spock’s World in an omnibus reprinting entitled Sand and Stars in 2004.

NEXT TIME: The jellyfish are upsetting everyone in Sins of Commission