[Sorry this one’s late. Been under the weather the past couple days. —Jess] 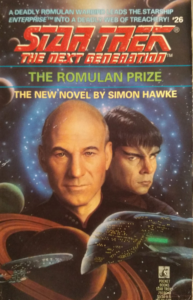 This week, the Romulans’ new warbird is harder, better, faster, and stronger, and though its new commander is young, he’s no daft punk, bagging no less a quarry than the mighty Enterprise. Now Picard must scramble to answer questions for a quiz he didn’t know was scheduled on a subject he didn’t know existed. Is Riker a Ninja Turtles fan? Was this book originally about Klingons? When will these books stop having exposition for people who have never heard of Star Trek? All this and more in The Romulan Prize, the book that puts the crew, as you humans say, in quite a pickle.

Valak has been hand-picked by the Praetor for a new special assignment: command of the new D’Kazanak-class Romulan warbird, which essentially is functionally no different from the D’Deridex class of warbirds, except that it’s twice as big with better maneuvering, more powerful ordnance, and less conspicuous cloaking. Valak’s military record speaks for itself, but what really lands him the job is his close study of humans, in particular Starfleet’s procedures and notable figures—something that makes him a fairly giant weirdo in Romulan culture, but nevertheless the best man for the job.

Cut to the Enterprise, which finds the supersized warbird floating derelict on the wrong side of the Neutral Zone. Boy, they just can’t keep those things running, can they? Ah, but this time, it’s a well-laid trap set by Valak. Evidently all it takes to bag a Galaxy-class starship is a big juicy warbird, some experimental drugs that make you look dead even to a tricorder, and a few acceptable casualties. Whoda thunk?

Valak demands to know what the deal is with Hermeticus II, a planet on the outskirts of the Neutral Zone that’s been quarantined by the Federation for over thirty years. Picard hasn’t even heard of it, but Valak is driving, so, road trip! The Romulans, paranoid as ever, suspect the Federation of setting up a secret base in order to spy on them. The presence of a Constitution-class ship in orbit (the USS Independence, long thought MIA) does nothing to allay their fears. But the question of how a starship, especially one as gutted as the Independence, could hang above a planet for three decades without its orbit decaying may actually be the least weird question on the table. Probes reveal that the seemingly inhospitable planet is in fact hollow, and that it isn’t even a planet, but rather a ship…

The Romulan Prize is the first of three Trek novels we’ll see from Simon Hawke. This one takes a while to establish a rhythm where it doesn’t shoot itself in the foot every few pages. Valak, as mentioned above, is a scholar of humankind, and as such is prone to deploying Terran idioms. This isn’t a problem but the fact that he prefaces every Earth saying with “as you humans say” is. It happens regularly, sometimes more than once a page, and it kills the momentum every time. The book also features jarring amounts of the kind of exposition for people who barely know what Star Trek is. Is anyone’s very first experience with the series really going to be a random novel? Does the person even exist who, twenty-six numbered installments in, needs three pages on the origins of Data, including a recap of “The Measure of a Man”?

Once these bad habits fall by the wayside about halfway through, however, The Romulan Prize settles into a decent groove. It has some pretty interesting bones, and I find Hawke skilled at allowing both the Enterprise crew and the Romulans to take risks on ambitious ideas that actually feel like they have a non-zero chance of not working. Everything must eventually bow to the almighty status quo, of course, so any author who manages to create a credible sense of uncertainty and shooting from the hip is to be commended.

The Romulan Prize isn’t without its issues, but I enjoyed it well enough on the whole. Hawke successfully cultivates an air of mystery and danger in all the right places, and all the pieces add up to a conclusion that zigged just a little bit when I expected it to zag. Valak is that rare specimen, a fun Romulan; his dry demeanor and verbal sparring with Picard are both major highlights. (I often imagined him as a Romulan James Spader.) I could have done without that irritating verbal tic, of course, as well as the info-dumps full of stuff I knew about TNG when I was 10, but overall, this is a solid debut effort.

I give The Romulan Prize 3 out of 5 D’Kazanak-class warbirds. Simon Hawke makes his Trek debut with a story that starts off rocky with some annoying bad habits and which is padded out with raw information that anyone who’s heard of Star Trek already knows. But once it picks up and sheds those things, it gets good, with character ambition and risk-taking that clock above average for a standard installment of the week. Add in a fun antagonist who makes a great foil for Picard, and you’ve got yourself a book that may not be the first one anyone would reach for, but is serviceable nonetheless.

NEXT TIME: A serial killer stalks Deep Space Nine in The Siege