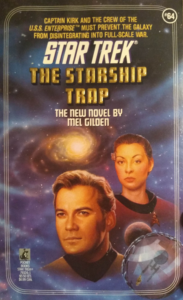 This week, the Enterprise gets cornered into pulling Uber duty for a haughty councilman, and Kirk couldn’t be less interested in getting a 5-star review. But hospitality becomes the least of Kirk’s worries when another guest reveals the ulterior motive behind his newest creation. Now the crew must travel from universe to universe, putting right what immediately goes wrong and hoping each time that their next leap will be the leap home. Who’s the lady with the head gear? Will Spock ever actually read The Wizard of Oz? And do we in fact live in a society? All this and more in The Starship Trap, the book where I admit I’m in it for the steak.

The Starship Trap
Author: Mel Gilden
Pages: 242
Published: April 1993
Timeline: Year 3 of the 5-year mission
Prerequisites: A solution to one dilemma is inspired by the events of “The Immunity Syndrome” (S2E18); also, the concept of Professor Omen’s “weapon of peace” is inspired by and named after the Jorge Luis Borges short story “The Aleph”, an optional but brief and indisputably compelling read

While docked at Starbase 23, Kirk receives new orders: go to Pegasus IV, go directly to Pegasus IV, do not pass Go, do not collect $200, pick up one Conrad Franklin Kent, and follow his orders without question. Kent is a Federation councilman with a bone to pick with Starfleet and designs on the presidency, always a perfect recipe for grinding Kirk’s gears. The big “emergency” turns out to be that Kent is to be chauffeured to Starbase 12 at the behest of his aide, Hazel Payton, a strong-willed, outspoken woman who “generally gets what she wants”.

En route, a Klingon ship approaches the Enterprise and accuses the Federation of causing Klingon ships to disappear without a trace, possibly by using some sort of secret weapon. Kent interferes and exacerbates the tension by all but confirming a secret weapon’s existence. When Kirk calls “citation needed”, Kent doubles down on the cryptic approach, claiming Professor Omen will reveal all at Starbase 12.

Omen, the developer of the current generation of starship ordnance (including that used by the Enterprise), has created a phased shield generator that increases shield strength substantially; once tested successfully, the Enterprise will be fitted with it and sent to where the disappearances are happening to contend with the source. That source turns out to be an artificial asteroid of Omen’s own creation. The asteroid generates Alephs, portals that show all possible universes in a single point without overlapping, through which Omen has been sending the weapons of war (i.e., starships) he has come to despise. Where do they go? Omen doesn’t know and doesn’t care. And now he’s managed to lure the biggest mouse of all to the trap…

Several recent installments have had to try twice as hard to be half as good as The Starship Trap effortlessly is. Last week’s book, David Bischoff’s TNG novel Grounded, serves as an especially instructive point of comparison. Bischoff bloviated at length about all the things that supposedly made him such an overqualified Trek author, but when it came down to brass tacks, he was found wanting. Mel Gilden, on the other hand, simply went out there and laid down a solid take on a more classic style of space romp, and I could hardly have had more of a blast.

I hesitate to call the elements that comprise The Starship Trap “meat and potatoes”, because that phrase carries a connotation of ordinariness that belies the fact that sometimes, there’s nothing more satisfying than a juicy steak and a properly loaded baked potato. This is comfort food at its finest. You’ve got excellent interplay between the power trio, a classic megalomaniac villain, and a strong concept inspired and informed by high culture (seriously though, read that Borges story). Yet Gilden also knows where to tweak the formula, when, and how. Hazel Payton is in many ways a formidable match for Kirk, and in a classic episode, they would have almost certainly at some point initiated docking procedures, if you take my meaning. But having her heart belong to another is a wise choice that keeps the story from indulging too unhealthily in classic TOS excesses.

And at just 242 pages, the whole affair barely has time to wear out its welcome. Nearly every book of late has hit a sweet spot in the 270s, so this one’s a little shorter than the recent average, something I think that works both to its advantage and against it. I just mentioned why that’s a pro, but it’s also a mild con because when the Enterprise starts universe-hopping through the Aleph about halfway through, they encounter one universe in particular that had me absolutely rolling with laughter. I could have read any number of universe jumps if they were all as great as that one, and while I’m sad that we didn’t get at least a few more, I’m okay with Gilden not taking the conceit too far and diluting the quality. If I have one complaint about the book, it might be that its various threads all wrap up a bit too tidily, but I had far too much fun to be even the slightest bit upset about it.

I give The Starship Trap 4.5 out of 5 Alephs. The potential to do something great was seeded in Gilden’s first outing, TNG’s Boogeymen, and it’s satisfying to see that he was able to capitalize on the momentum he started building there. There hasn’t been a classic adventure this flat-out fun in a while. I loved practically every minute of this book. The OCs were compelling, the concept of the Aleph led to some excellent moments, and the whole book showed a solid understanding of the parts that are good about TOS formula and the parts that could use a little tweak. Any fault that I could potentially find with it crumbles next to the magnitude of the fun I had reading it. This is how to do classic TOS right.

NEXT TIME: From The Devil’s Heart, Picard stabs at thee