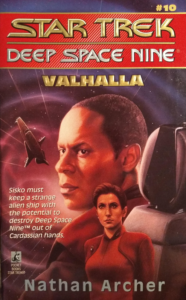 This week, when an influential Cardassian figure dies, a whole host of potential heirs line up to fill his boots. But when a derelict starship starts asking questions about the afterlife, Sisko has to stay on his toes to make sure he isn’t the one who gets Sunday-schooled. Will Dukat get that big promotion? Will O’Brien get to play with a new toy? And can DS9 get its outbreak of crabs under control? All this and more in Valhalla, where we take on the ugly elephant in the room.

Sisko and Kira are arguing about a passive-aggressive though technically legal Cardassian incursion on Bajoran space when a totally unknown ship comes out the wormhole on a trajectory for Cardassian space. Sisko has it tractored in, and Dax, O’Brien, and Bashir examine it. The ship is loaded with radiation and dead bodies. O’Brien gets excited about some strange grooves that could be an advanced type of circuitry called a Besrethine neural net, which the Daystrom Institute has never gotten to work properly. He’s keen to tinker with it, but Sisko has bigger fish to fry, and that development sadly just sort of fizzles out.

Meanwhile, several Cardassian political leaders are vying to become heir to the Goran Tokar, a man of considerable wealth who believes Cardassia pulled out of Bajor too soon, and that there’s still plenty of good stuff to be found there, such as the Celestial Orb. Hence the recent incursions and invasive scans; some of them are even talking about reoccupying Bajor (!). Concerned that certain candidates for the … Goranship? Gorancy? would do exactly that given half a chance, Sisko and Kira set aside their squabbles and put their heads together to come up with ways to indirectly sway events so that one of the less threatening candidates wins the post.

Several people report seeing ghost crabs with tentacles, but although they’re a little spooky, they don’t do any harm at first. The moment one does, Sisko orders the ship released from the mooring clamps. But by then, it’s too late: an alien voice starts croaking through the speakers, and the ship takes control of the station, but in some weird subatomic way such that the computer doesn’t recognize that any signals are passing through it. Eventually they establish communication and learn that the ship, named Enak, has achieved sentience and believes it’s arrived in heaven. Sisko tries to answer its questions, but Gul Dukat horns in, demanding the return of the station, the wormhole, and Enak. Enak is perfectly content to allow a forcible Cardassian boarding, if only because it will facilitate its experiment: Enak wishes to observe the soul leaving the body, an outcome it hopes to achieve by pitting DS9 against the Cardassians.

Nathan Archer is a pseudonym used mainly for science fiction by an author named Lawrence Watt-Evans, itself a minutely altered name.1He hyphenated his last two names at the behest of a publisher to distinguish himself from another Lawrence Evans. He’s one of those people who in Voyages of Imagination professes to be a non-fan, which is usually a cause for alarm. But even with nearly three seasons under its belt, we’re still getting stories that were commissioned before the show even started, so it’s fair to argue no one was really a “fan” yet. And besides, this one ended up being a lot of fun. A lot of that comes down to Enak, who gets exactly the kind of wonderfully exploratory origin story that I was just saying a few weeks ago never shows up in these books because they don’t have the time or space for it. Way to make a fool out of me, Archer!

Enak’s story comprises almost a full 10 percent of the book (25 pages) and gave me an acute yearning for the time when it was possible to take the focus off the main characters for an extended period. By now, the page counts on these things are so set in stone that I’ve often wondered why I bother including it in the basic information up at the top. But it’s nice to see that some flexibility is still possible. It’s not just that part of Enak that’s interesting, though. The way it comes to irrational conclusions through what seems like pretty sound logic is quite compelling. The political thread isn’t too bad itself, but the Enak stuff is just in a different class.

The characterization is also more agreeable than what we’ve been getting. The characters actually seem to like and want to like each other for the most part. Archer astutely observes that the most relevant internecine conflict at the beginning of the series is the one between Sisko and Kira, and even then, the concessions to each other feel more real than they have in most of the novels to date. He also seems to be more interested in a healthy respect for continuity even at this early stage of the show, which could be part of what helps it feel like what would eventually register as “true” to Deep Space Nine. It’s mentioned as taking place before Betrayal, and the climax incorporates an idea I had forgotten about entirely from one of the better season-one episodes.

At this point, happening upon a numbered Deep Space Nine novel I enjoy is getting to be like finding an oasis in a desert. Valhalla isn’t a mind-blower, but right now the bar is low enough that I’m more than happy with something I simply don’t hate. It’s refreshing to get a bit of that old “stepping away from Trek for a minute” flavor, and it rarely if ever sags for any significant length of time. I don’t get to say this very often about DS9 books, but this one is worth checking out.

Valhalla is one of the more purely fun early DS9 novels. A ship that thinks it’s arrived in heaven is a juicy hook, and Enak’s backstory gets the kind of treatment I’ve missed seeing original characters have lavished upon them. For a novel commissioned before the series aired, the characters are mostly on point and the attempts at continuity are valiant, which goes a long way toward making it a breezy read. You just can’t judge Star Trek novels by their covers—even ones as ugly as this one.

NEXT TIME: Picard goes for the hard sell in The Romulan Stratagem