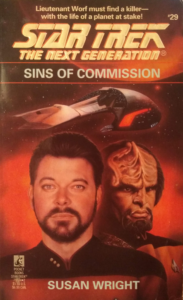 This week, when a passenger liner pulls up alongside the Enterprise, an already stressed-out Worf is embarrassed by a social connection. But when an explosion forces the cruise ship’s evacuation, the aquarium exhibit could be the undoing of them all. Are we too hard on Alexander? When did Barclay get busted down? And do we really want to know what goes on in the “Vibration Room”? All this and more in Sins of Commission, the book where Geordi, unsurprisingly, has blow-up dolls on the brain.

Sins of Commission
Author: Susan Wright
Pages: 277
Published: March 1994
Timeline: Over a year after “The Drumhead” (S4E21)
Prerequisites: “The Drumhead”, but only for a featured character, not really events from therein

Not long after the Enterprise arrives at the planet Lessenar to assist with environmental cleanup, a passenger starliner, the Prospector, rolls into the neighborhood. Its captain, Jacob Walch, happens to be an old friend of the Rozhenkos. After an explosion cripples the Prospector, the Enterprise takes on its evacuees, a group comprising mostly a bunch of grumpy boomers but also some members of the Sli, a jellyfish-like race heretofore known primarily for two things: 1) amplifying the emotions of nearby beings, and 2) wrecking the absolute dookie out of the few Federation and Klingon parties that have attempted contact.

One of the Sli dies in transit, which invokes the wrath of their handler, a Ferengi named Mon Hartog. Hartog manages the Sli and books their “emotive concerts”, events in which their powers of amplification are turned on a receptive audience to euphoric effect. Naturally, that means Hartog has skin in the game, and as such, he’s quick to cry foul, accusing the Enterprise crew of murder.

With the remaining living Sli taking up a cargo bay, it’s not long before their emotional broadcasts start to wreak havoc on everybody aboard the ship. Simon Tarses, still dealing with the fallout of “The Drumhead” and ready to transfer off the Enterprise yesterday now that his probationary period is over, goes pretty far off the rails. Worf, already stressed out from the appearance of Captain Walch and some phone calls from Kurn expecting Alexander to come back to Qo’nos and learn how to lead his clan, is even more forward than usual. Beverly is unprofessionally flippant, and even Riker and Picard manifest different behavior patterns. Matters go from bad to worse when Hartog reveals that Walch’s brother served on a ship destroyed by the Sli and accuses not only Walch of committing the murder, but also Worf of helping cover it up.

Although Sins of Commission is not really a very good book, it’s peppered with samples of the kind of flavor that is a part of books I tend to really like. For one thing, I like a good inscrutable alien, and the Sli fit the bill nicely. They sort of hearken back to the Kh!lict from Windows on a Lost World with their Hypercolor mode of communication, but this time, the code is far less easily cracked. The officers also have the kind of casual looseness with each other that’s typical of the better TNG novels.

But Sins of Commission is filled with the kinds of mistakes that for the most part should not be happening in books at this point. Some of them are misfires on basic core details that even a mostly oblivious goof like me can tell you don’t smell right on the first pass. (A few such are detailed below.) Also, however, there are certain story parts Wright loses track of … and she loses track of them hard. The thread involving Lessenar, notably, disappears pretty much entirely once the Sli business gets rolling, and ends up getting such quick lip service at the end that they end up shrugging off a massive Prime Directive violation (yes, I will talk about this some more in a little bit). And, of course, a plot relying heavily on loss of emotional control is a little bit wasted in the notoriously Vulcan-light TNG.

I was also a little disappointed that we didn’t get to see some of the original characters introduced here at their best. There are two in this book whom I enjoyed: Lt. Chryso and Ensign Puckee. Chryso isn’t much more than Ro Laren in a blue tunic instead of a red one, but I always enjoy women who are strong against Riker. Meanwhile, Puckee deftly walks the thin line of being able to question and improve on a superior’s suggestions without coming across as insubordinate. Unfortunately, because of the Sli, we don’t get a good sense of what they can do at their uncompromised best.

I think the bones of a good Susan Wright take on the Star Trek universe are there, and I applaud the efforts to get outside the box with the Sli, but this just isn’t the story for them or the TNG crew. Also, the Ferengi always make for weak villains in TNG even in the best of circumstances. I feel really bad for this one: it could have been a lot better with even just a light amount of editorial TLC. But at the rate they’re starting to crack these things out at this point in the project, it’s not altogether surprising that one might slip through the cracks here and there.

I do not recommend Sins of Commission, but it’s a light DNR. There are lots of fascinating and amusing bits as well as signs of potential that inspire hope for later books by Wright, but there are also a lot of mistakes of varying degrees of seriousness, and unfortunately, those mistakes are too amateurish for me to really be able to say in good conscience that this is a good or well-put-together book. I’m interested to see what else Wright has coming, though.

NEXT TIME: Jake Sisko visits the other side in The Star Ghost