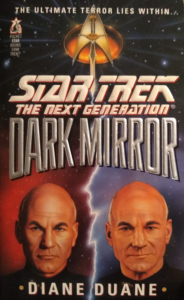 This week, when the universe sneezes, the dolphins are the first to feel it. But when the crew realizes where they are, they ping-pong the Enterprise off the Enterprise while they decide who gets to sign up for the espionage mission. What do this book and GameFAQs have in common? Has the Federation somehow improved its already dizzyingly fast trauma recovery speed? Did Diane Duane accidentally set this book during Wolf 359? All this and more in Dark Mirror, the book that’s chock full of bremsstrahlung.

Dark Mirror
Author: Diane Duane
Pages: 337
Published: December 1993
Timeline: Early season 4
Prerequisites: Being up to speed on “Mirror, Mirror” (TOS S2E4) is a good idea, although the book summarizes it quite thoroughly

In October 1967, just over a year old at that point, Star Trek introduced what would prove to be one of its most indelible and enduring concepts: the Mirror Universe, a dimension parallel to our own, with a nearly identical evolutionary and developmental track, but instead of being motivated by scientific and intellectual curiosity and striving for peace and galactic unity, its inhabitants are instead driven by power, greed, subterfuge, imperialism, and swift, brutal retaliation. A potent brew, to be sure, though not always used to its maximum effect.

To wit, a brief history of its appearances: after its single episode in TOS, TNG went seven seasons without so much as a mention. Deep Space Nine brought it back in a big way, with five episodes set there during its seven-season run. The concept fell back into disuse for the entirety of Voyager‘s run—probably for the best, since that show was usually hammy enough on its own without bringing Mirror shenanigans into it. Enterprise featured it once in a two-parter, and Discovery has already leaned into the idea with gusto, with an episode count equaling DS9’s after just two seasons.

Dark Mirror was written and published toward the end of TNG’s run but before DS9 started strip-mining the concept for all its worth. I consider DS9 in many ways a spiritual sibling to TOS, so it makes sense that it would be the show to continue carrying that torch. But although it often provides ample opportunity for the cast to revel in the open-mouthed chewing of much scenery, I often feel like DS9 Mirror episodes lack the menace that makes the Mirror universe so compelling in the first place.

Dark Mirror, as it happens, has no issues conveying said menace. Recently my taste buds changed (so to speak) following a series rewatch of TNG, and now I find it a bit too anodyne for my liking. Mind you, I still like it a lot; it’s just fairly vanilla in my estimation. That said, what Duane does outstandingly here is turn those round edges into sharp corners. Anyone expecting, say, the rakishness of Mirror Sulu or the outsized horniness of Intendant Kira will walk away empty-handed. Rest assured, the adjective in the title isn’t just there for looks; this take on the Mirror universe leans far more toward the serious end of the spectrum.

The leader of a nomadic conglomerate of species called the Lalairu tries to warn Picard about a dangerous shift in reality nearby, but even with the universal translator, their language is so baffling and incomprehensible that Picard all but blows her off, essentially telling her, “lol, risk is our business, we’ll be fine.” But later, in Ten Forward, he feels the universe dim around the edges for a split-second, a sensation corroborated by over half the crew. Someone who definitely notices is a dolphin named Hwiii, a visiting scientist studying hyperstrings, who has a meltdown when his cetacean navigational senses tell him the Enterprise is in completely unknown, un-cross-reference-able space.

Not long after, a redshirt named Mark Stewart is caught meddling with the computer core. But this Mark Stewart is an imposter, albeit an almost completely identical one, save for a couple key differences in biology and memories. Stewart is terrified of the consequences of failure, especially, specifically, of what Counselor Troi will do to him. Eventually, the regular Enterprise detects the Mirror one, and as they play “bumper cars” with the sensors to stay out of the imposing dreadnought’s range, they formulate a plan to beam over without being detected and gain intel that will hopefully help them get home.

Security on the Mirrorprise proves frustratingly hardcore, so Picard makes the tough decision to beam over and assist with clearance for locked-down systems. Amid the attempt to blend in while choking down their disgust with Mirror Universe morality, Picard pieces together the Earth Empire’s plan. This time, the Enterprise’s slip into the Mirror dimension was very much intentional. The Mirrorprise pulled its counterpart into their own universe to kill its crew and pose as them. Having run out of territory to conquer and peoples to subjugate in their own space, they seek to hop over to the other universe and start in on that one.

More than with any other Trek author, I know I’m in good hands when I see the name Diane Duane on the cover. I don’t always feel like I can trust Trek novels to keep up with my imagination, but that’s a fear I never have when reading one of hers. Unsurprisingly, Dark Mirror received the same astounding depth of thought and consideration you can expect from any of her other books. The ramifications and logical extremes implied by the Mirror premise are identified, acknowledged, and fully explored to the reader’s immense satisfaction.

Duane imagines the Mirror Universe not as merely a watershed, but as the culmination of thousands of years of moral inversion—and the result is chilling. One of the book’s most disturbing scenes1(Non-Torture Division) has Picard seeking comfort in the words of Shakespeare, only to discover a twisted alternate telling of The Merchant of Venice in which, rather than compelling Shylock to show Antonio mercy, that it may be shown to him in kind, Portia instead argues on behalf of Shylock’s right for justice, and the pound of flesh is taken right then and there. (Picard subsequently, and perhaps wisely, is afraid to even pick up the Bible.) Mankind, Duane argues, didn’t instantly develop a lust for conquest as a 1:1 product of achieving FTL space travel; it’s what their entire history has been building toward.

Earlier I mentioned in passing the comparatively benign nature of TNG. It’s precisely that that makes the idea of that show’s cast landing in the Mirror Universe so frightening and effective. It’s hard to imagine an author finding a scarier counterpart to this crew’s strait-laced gentility than Duane did. Oddly, I think the difference in medium also works to the Mirror Universe’s advantage; where television offers a single static interpretation of the concept, books keep a reader on a looser leash, allowing one’s imagination to stray into wilder territory. It certainly works for the torture scene, which is the most harrowing of its kind I’ve seen in a Trek novel to date, and which will stick with me for a long time. Of course, it also relates to my only real complaint about the book, which is that it’s hard to buy into the notion of some of the more subdued Mirror personalities, like Worf and Barclay, making it as far as they managed to in such a cutthroat society.

Reading about this book, I learned that most later portrayals of Mirror!TNG pretty much ignore it entirely and are based more off later canon. On one hand, that makes me a little sad, but I choose to believe that it means Duane is just that tough an act to follow. Of course, except for occasional quick nods, Star Trek novels of this era are more or less each their own island anyway. But what an island this one is. Lest you catch yourself underestimating the toughness of the Next Generation crew, this book will quickly and thoroughly disabuse you of that notion with a stern rap to the knuckles—or, perhaps if you’re unlucky, with a trip to the agony booth.

I strongly recommend Dark Mirror. This book hits the high-concept jackpot with what was in its day the first revisit of one of Star Trek‘s most salacious conceits. The Next Generation normally being such a straight-shooting representation of Starfleet is precisely what makes its evil counterpart so terrifying—and such a ripe premise for a book. Just about any “what if” and “what about” you can come up with is addressed to satisfaction. Diane Duane does it again. Never doubt her. Never.

NEXT TIME: Worf and K’Ehleyr fight for Survival