(This week’s review requires a content warning for rape. Proceed at your discretion.) 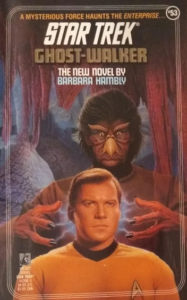 This week, Kirk gets a raw deal on a Freaky Friday and doesn’t even get a Handbook for the Recently Deceased to help him cope. While he struggles to keep it together (literally), his body thief does a U-turn and heads back home with the goal of putting up the ultimate “No Soliciting” sign. What magazines do the senior officers read? What’s the most depraved film Sulu has ever shown in the rec room? What possible excuse could the future have for bad coffee? All this and more in Ghost-Walker, or, The Computer Wore Captain’s Boots.

The Enterprise has paid a visit to Elcidar Beta III to see about the Midgwins. No, they’re not the latest collectible toy craze of the holiday shopping season: they’re little three-fingered scaly bird aliens who stand around holding hands in a thousands-strong kumbaya called the Consciousness Web and wait for the planet to feed them. This way of life is on track to do the Midgwins in sooner rather than later. Their population has outgrown their food supply, and although the Federation wants to help, the Midgwins believe getting food in any way that isn’t waiting for it to be dropped into their laps by Rhea the Planet Mother Spirit is mi’ik, or greedy, the culture’s gravest insult. On top of that, the Midgwins have had some recent run-ins with the Klingons, and are unclear whether or how humans are any better.

Kailin Arxoras, the Midgwin patriarch, is on the cusp of admitting they can’t solve their food problem without external help. But others aren’t so keen to capitulate—namely, Yarblis Geshkerroth, the titular Ghost Walker.1For whatever reason, the only time “Ghost Walker” is hyphenated is in the title. Leading a small band of isolationists, Yarblis evicts Kirk from his body and takes it over right as the landing party returns to the Enterprise, and hopes to successfully pose as the captain long enough to devise a plan to force the Hungries, as those Midgwins who are decidedly less enamored of humanoid races call them, to leave his people to hold hands and sing and starve in peace.

Barbara Hambly’s last Star Trek outing, the copyright lawyer’s wet dream Ishmael, came almost six years and 30 numbered installments prior. Ghost-Walker is a more standard-issue adventure, but a stronger one. It gives more characters, particularly Uhura and Chapel, a chance to shine, and it revels in the rich inner lives of off-duty officers. Hobbies both above board and less so abound on Hambly’s Enterprise, some of which turn out to be integral to major story developments. Even Kirk is enjoying himself more than usual at the beginning of the story, albeit in exactly the way you’d expect (i.e., with a woman).

That woman is Helen Gordon, a scientist who casts aside a plum career opportunity researching the Midgwins up close to stay on the Enterprise and deepen her relationship with Kirk. The couple gets as hot and heavy as early-90s Pocket Books editorial standards would allow—a jarring shift from last week when Riker and Lyneea played coy until literally the very last page. In a departure far enough from Kirk’s usual type to qualify as legitimately shocking, Helen is a rather large woman. Disappointingly but perhaps predictably, Hambly downplays her size, calling her “big-boned”. I wish the book had leaned more into the revolutionary idea of Kirk dating a plus-sized woman, but there’s no doubt he’s genuinely over the moon for her.

Unfortunately, Helen gets it even worse from Yarblis than Kirk does. Getting displaced from your body and having to invest significant energy in thinking about what you look like to keep your katra intact is pretty rough. But Yarblis also struggles to convincingly emulate human behavior, and in his effort to proceed normally with Kirk’s life and keep up appearances, he ends up raping Helen. Although Helen understands intellectually that it was Yarblis who violated her and not Jim, the damage proves nonetheless irreversible, and though status quo would never allow otherwise, the circumstances requiring their separation are still deeply tragic. (Spock at one point compares Kirk’s attraction to Helen to his regard for Edith Keeler, putting her in rarefied company indeed. Would that how much he loved them been the only thing they had in common.)

As you can see, Ghost-Walker is a book that runs a huge gamut of moods, from boundless fun to catatonic despair. But it manages all of them very well, and on top of that, it has a literary heft I didn’t realize was missing from recent Star Trek books until I felt it reading Ghost-Walker. I confess I’ve been mentally rewriting many of the more overwrought and ham-fisted sentences I’ve read in recent novels, but I didn’t have to do that here. Hambly’s way with words is a definite cut above the usual, and while I’ll likely never pretend these books can hope to aspire to even some of the mid-range echelons of lit fic, it’s nice to not be playing armchair proofreader.

It’s hard to resist the temptation to compare Ghost-Walker directly to Ishmael, but this book is so much stronger than that one, and it’s because it isn’t leaning on gimmicks—simply powering forward with a juicy story, well-developed characters, a compelling villain, and an expansive vocabulary. Hambly goofed around and had silly low-stakes fun with Ishmael, but Ghost-Walker is where the real chops come out, and they’re a force to be reckoned with.

I give Ghost-Walker 3.5 out of 5 mysteriously overturned objects. Although somewhat plodding and meandering, this is a fascinating bottle episode that deftly exhibits a wide variety of moods, from fun to suspenseful to heartbreaking, and in the tradition of some of the finest Star Trek novels, it takes ample time to luxuriate in the various recreational habits of the Enterprise crew. The Midgwins are a little bit goofy, but there are plenty of Star Trek alien species that fit that bill, and Yarblis is no joke when he goes full beast mode. Overall, a solid effort.

NEXT TIME: Worf and Deanna work together to solve a murder in Contamination