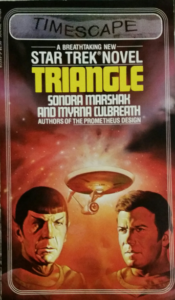 Ah yes, Sondra Marshak and Myrna Culbreath, authors of The Prometheus Design. Man, that was a rough book to get through. Kirk really took a beating in that one. Well, I certainly hope nothing like that happens in this book.

Page 8: The Ambassador smiled ironically. “Have you considered my servant Job?” he quoted.

Triangle is the second and only other STPB novel by the writing duo of Marshak and Culbreath, and it bears a number of similarities to their previous effort, The Prometheus Design. Like that prior story, it begins with a disorienting prologue where characters we don’t know yet discuss Captain Kirk and his/the Enterprise’s potential. It pits the Enterprise against a largely abstract threat that believes it has evolved beyond humanity. It follows Kirk, Spock, and McCoy to the almost total exclusion of the rest of the bridge crew. It even makes occasional reference to the Prometheus myth! About the only major differences are that romance factors heavily into this one, and Spock is a heck of a lot calmer than he was in The Prometheus Design (and when he’s not, there’s a good reason).

The Enterprise is investigating starship disappearances in the Cephalus system in the Marie Celeste sector, a well-known starship trap. Kirk’s ribs are cracked from a previous noodle incident, and he’s having funky dreams about never being alone and having all his secrets known by something or someone that may or may not be a higher life form. He’s feeling distinctly never-alone when his eyes are open too, because they’re transporting Ambassador Gailbraith and his entourage. They’re all part of a big happy family called the Oneness, a collective consciousness Gailbraith feels is the inevitable next step in human evolution. Gailbraith is hoping to interface with another such group called the Totality, who are similar but have much less chill about people opting out of collective consciousness.

Gailbraith and his cadre aren’t evil, per se, but they are awfully pushy about bringing people into their fold, and Kirk isn’t too keen on it, calling for confinement to the brig since they can’t keep their hands to themselves. He barely thwarts a mind link with Spock, to Gailbraith’s ire; Gailbraith calls Kirk a “dinosaur” and compares him to an amoeba attempting to comprehend a multi-celled life form. Not very nice, but also maybe not necessarily untrue? When Kirk tries to break up another encounter between a Oneness girl and a security officer named Dobius, the girl turns on him and snares him. Kirk sees for himself the true vastness of the machinations of the Oneness and that they really do seem to offer something of significant appeal, and when he finally breaks away, he feels markedly weaker and disconnected from existence.

Spock worries that mental contact with various alien species over the course of several years has rendered Kirk particularly susceptible to psychic assault by Gailbraith and/or the Oneness and recommends he go to Bones for a quick once-over, but Kirk is too excited to meet the Federation Free Agent the Enterprise has been diverted to pick up. Free Agents aren’t explained at much depth, but they seem to be sort of like the Starfleet equivalent of Green Berets.

Before the meetup, Kirk takes a swim on one of the rec decks, but cramps up and starts drowning. Someone—he assumes Spock—pulls him to safety, and while his savior massages his spasms out, he has a revelation of a vast plan involving him, the Oneness, and some other Oneness he doesn’t recognize (i.e., the Totality). When he wakes up, he realizes Gailbraith, not Spock, saved him, which is odd because he’s already had Gailbraith and his gang confined to the brig, so how did he get out without guards noticing or alarms going off? Gailbraith once again pushes the hard sale on Kirk in an exchange that gets weirdly a little slashy, but Kirk says no means no and runs off to tend to the matter of the incoming Free Agent, whom they finally meet, and it turns out *gasp!* she’s a woman! Unbelievably, over a full page is devoted to this mind-numbingly obvious fact. I get that TOS isn’t exactly woke, but you’d think by the 23rd century, even a guy like Bones would be a little more acquainted with the idea of such a woman of action. Anyway, her name is Sola Thane, and she’s a half-human, half-Zaran hybrid who left Starfleet to go off the grid and lead her people in the resistance against the Totality.

Sola and Kirk start digging on each other pretty much right away, which isn’t terribly out of the ordinary—I mean, Kirk is always DTF with alien babe-age. But it’s not just Kirk being his typical horndog self; we later learn their meet cute was premeditated by Gailbraith, as mating will enhance Sola’s latent psionic powers in a way that will help Gailbraith tip the scales in favor of his Oneness. But there’s an unanticipated wild card: Spock is also into Sola, and it’s not long before he gets all hot and bothered and the defenses he builds against emotion start failing. Say, what time is it? No reason, just curious. Let me just bring this review to a grinding halt and do some quick math. Okay, so “Amok Time” was season 2, which = the second year of the five-year mission. Two plus three is five = mission complete. Then it’s three years between the end of the five-year mission and The Motion Picture. Then this story is set about a year after that film, so three plus three plus one is seven…

Yes, the math checks out. Actually, the pon farr business resolves fairly quickly, thanks to Sola, who’s badass enough not only to take a Vulcan beef injection but also to goad Spock into it. There’s a great bit where Sola posits that Spock’s willingness to protect humans by leaving them and striving for Kolinahr was itself such an emotionally driven act that it precluded any possible chance of success of ever attaining Kolinahr. I have to give Marshak and Culbreath some credit: Sola Thane is arguably the toughest female OC to appear in one of these books yet (though Hunter and Mandala Flynn are up there). She’s kind of like Secret deodorant: strong enough for a Kirk, but made for a Spock. (Or is it the other way around?)

And so the title refers not to one but to two triangles: the mate bonds between Kirk, Sola, and Spock, and the war for evolutionary supremacy between the Oneness, the Totality, and good old fashioned single-organism lovin’ (represented by Kirk). Gradually, it’s revealed just how much of the crew is under the control of one external force or the other, as well as the true extent of the legwork Gailbraith’s been putting in to keep the Enterprise from completely succumbing to the Totality. Then Soljenov of the Totality appears on the bridge to issue his challenge; Sola, Kirk, and Spock are dropped into the jungles of Zaran to survive the mate hunt; and the true test begins.

If for no other reason, Triangle is at least semi-interesting as an exploration of collective consciousnesses that predates the Borg, though it has a significantly more hippie-ish leaning. The Oneness is sort of related to the idea Gene Roddenberry hinted at in his Motion Picture novelization of the New Humans—i.e., human beings of advanced intellect beginning to explore concepts like telepathy and group mind links who consider Starfleet’s emphasis on rugged individualism outmoded. It all feels most akin to the rainbow-infused 2001-adjacent vision of Star Trek that dominated the late 70s, making Triangle feel like somewhat of an anachronism even just four years out from the decade its ideas most closely align with. It’s not exactly bad, however.

Triangle gets a big boost from better utilizing its original characters, though it did run into a spot of good luck that at least one of them dovetailed so nicely with what the book was going for. Security officer Mr. Dobius was introduced in The Prometheus Design as a member of a species called Tanians, who have bifurcated heads that essentially house two separately functioning brains. While just a neat bit of biological flavor in that previous book, it actually comes into play in this book when one of his brains gets taken over by the Totality while one remains controlled by the Oneness, making him a figurehead for the power struggle being waged between the two entities. Sola Thane is also compelling and smart—more than a match for both Kirk and Spock. Unfortunately, the lower-billed cast once again gets the shaft—Scotty gets a brief exchange with McCoy and a captain’s log entry, and Uhura has some shade to throw at the New Humans movement, but that’s it. I think Marshak and Culbreath also got far less out of their depth by staying in this dimension this time.

I know I spent a lot of time comparing this book directly to the last book written by the same people, but with the exception of a handful of added and/or tweaked details, they’re basically the same book. Triangle is definitely the one that comes out on top, however. Though a good critic always hopes for the best, The Prometheus Design was such a dire read that I admit I wasn’t looking forward to Triangle. Between the two, I’d handily take this one, with the caveat that the recommendation I give it is one of the mildest I can muster.

Triangle hits a lot of the same beats as The Prometheus Design but is a more palatable story overall. It’s just as well that this is the final Marshak/Culbreath joint—their bag of tricks probably couldn’t have sustained another book without serious variation. On the other hand, with further refinement, future iterations on the same formula might have been even better. Triangle turned out fine, but it’s hard to say whether a third such story would have moved the needle in the direction of better or worse.

NEXT TIME: Web of the Romulans