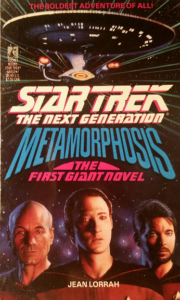 An away team’s survey becomes a one-man test of will when the planet’s “gods” decide to fire up the PS3 and stick Data in a game of Journey. Data completes the Quest and is granted his fondest dream: to become a Real Boy™. Now he has to learn how to do human things like pick dinner and swim and look things up on the internet because he doesn’t have Wikipedia in his head anymore. This week, it’s Next Generation‘s first major event novel, Metamorphosis, or, Androids Prefer Blondes.

The Federation is looking to add some new space lanes for civilian traffic, and one of their planned routes passes by the planet Elysia, where over a century ago, an away team from the USS Clarion got the boot after they unknowingly broke some rules regarding where they could and couldn’t explore.1At least they didn’t get Edo’d. Picard sends another away team to try to reestablish contact and hopefully not make the same mistake a second time.

As the away team tries to determine the role of the planet’s only mountain in the gravitational fluctuations they experienced on the way in, the Elysians approach them, believing them to be on a Quest (presumably capitalized to emphasize its importance) handed down by the planet’s “gods”. Data hears something and decides to investigate, and the rest of the away team beams up ahead of him. Suddenly, his equipment stops working, and he rescues a woman named Thelia as she rows in through the poisonous fog that forms the boundaries of the habitats, and before they know it, they’re both told by a mysterious voice that they’ll be going on one of these Quests we’ve only recently heard so much about.

The Quest is not unlike a classic PC adventure game. One is summoned by the gods for this Quest, wherein they conquer obstacles scaled to their experiences, abilities, and fears. Penalties are incurred for selfish and/or incorrect choices. Upon successful completion, the gods grant the Questor their specified wish—within reason, of course, although, as it turns out, they’re capable of quite a lot. Thelia wants her habitat, Atridia, to be joined with the neighboring land of Tosus, so they can trade with each other without having to travel through the danger fog. Data briefly considers getting to the bottom of what these “gods” are and how they grant wishes, but gets selfish and decides to become human, the moderately amusing thought exercise we spend the middle of the book exploring.

All of a sudden, Data is back on the Enterprise, and after a truck load of medical tests to determine whether it’s really him, he has to learn how to navigate the everyday minutiae of being human, like regularly eating, sleeping, showering, and even taking a leak. He learns the hard way about laziness, overindulgence, jealousy, anger, sadness, horniness, forgetfulness, ineptitude, and all kinds of other difficult-to-navigate feelings. He also has sex, which for obvious reasons is not delineated in as much exacting detail as his other human experiences, though if Survivors is fresh enough in your memory, you probably won’t be surprised by the identity of the person he knocks boots with.

With a net loss of one android and a net gain of one human, the Enterprise proceeds to the Samdian sector, where a race called the Konor are barging in and making slaves of everyone who doesn’t share what appears to be their newfound knack for telepathy, which they equate to lacking a soul. Crew morale is already low after not learning anything more about Elysia, and the possibility of failure to bring peace to the Samdian sector threatens to tank it even harder. Was Data deciding to become human such a great idea after all?

It was probably inevitable that a book exploring the possibility of Data turning into a human being was going to be written by somebody at some point. What surprises me is how quickly they resorted to it. Granted, I was only about to turn 4 when season two debuted, but I don’t have any impression that Next Generation was ever on the bubble even after that woofer of a first season. To my way of thinking, this is a premise that would have gotten stronger the more history the show had behind it. You come out with this during season 7, or maybe while the movies are going strong, and that’s where you can really start connecting dots and packing a real punch. That doesn’t mean it’s bad for coming out when it did—just I can’t shake the feeling it’s not all it could have been.

One thing I will say Metamorphosis has going for it is that it’s probably the first Star Trek book I’ve read that I’d recommend to a casual fan (of the series in general, and TNG in particular). In my anecdotal experience having conversations with people who have admitted to low familiarity with TNG but fond feelings for it all the same, they almost always identify Data as their favorite character, and this book focuses pretty much exclusively on him. Outside of a motley crew of original characters whose presence here might confuse them, the book’s got a pretty low barrier to entry, and it’s a satisfying exploration of a concept that even a lot of regular people care about at least a little. I’m a bit surprised, thinking on it now, that event novels aren’t more often used to follow up on big questions that attract casual fans’ interest, but Metamorphosis does exactly that.

Despite running almost 400 pages, Metamorphosis isn’t an especially meaty book, and it probably could have been more fun and funnier in the hands of a more daring author—say, Peter David, maybe. And while it should be a foregone conclusion that this state of affairs isn’t going to work out in the long term for Data, it’s interesting enough while it lasts. “Data actually turns human” is most likely TNG’s number-one dream concept, and in reality it would have been hard to truly botch it. Metamorphosis is fine, but it’s not much more than that, either.

So, I wasn’t sure if I should do one of these this week. It would be for Thralen, the Theskan sociologist.2Theskians are basically Andorians minus the stick up the butt. Thralen eats it when the Konor situation goes south, but due to some later, er, re-jiggering I feel it better not to spoil, he … doesn’t come back to life, per se, but rather is restored. So do you pour one out for a character who doesn’t stay perma-dead? In this case, I think it’s fine, because I thought he was out for good at the time, and it was a big bummer (in no small part because of how tore up Data gets about it). Now, if it was the sort of thing where you know they’re going to be back a minute later—not to get too far ahead of myself, but not unlike a certain someone in next week’s review—then I wouldn’t bother. But Thralen is good enough, he’s smart enough, and doggone it, I like him. So here’s to you, buddy.

I give Metamorphosis 3 out of 5 life-changing Quests. As a thought exercise, Metamorphosis is cute and mildly amusing, and it’s clear Lorrah has shown her work. But much like Data’s new human form, it starts to sag in the middle, and it’s hard not to feel like they played the “Data becomes human” card a little hastily. It’s not bad by any stretch, but it’s unlikely to knock your socks off, though casual fans may find themselves especially intrigued by the premise.

And with that, we reach the end of Jean Lorrah’s literary contributions to the Star Trek universe. Tough never a stellar writer, she turned in some solid, capable work for the most part. Here are the Deep Space Spines takes on her other Trek novels:

NEXT TIME: Spock and Saavik adhere to The Pandora Principle