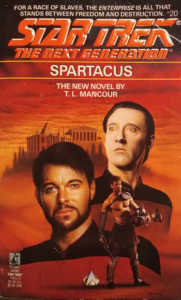 This week, the Enterprise finds an old ship from the planet Vemla that hasn’t had the last few Windows Updates. But during the grand tour, a stray injury leads to the revelation that they’re all androids on the lam. Matters go from sticky to sludgy when the androids’ builders show up charging them with terrorist actions and demanding them back for dismantling. Now Picard has seemingly only two choices: violate the Prime Directive or violate the Prime Directive. Will he find secret option C? Has Data finally found his people? And what’s in Picard’s special synthehol mix? All this and more in Spartacus, the book that sets the record for destroyed port nacelles.*

As we join the Enterprise, they’re weathering a space storm called a Gabriel Effect. In addition to actually knocking out their warp drive, the storm also causes their computers to dispense false information, such as repeatedly reporting that the port nacelle has been destroyed. It can also, evidently, turn everyone on the ship to ash at any given moment, though given the fact that the bridge is loaded with high-paid, top-billed cast members, that seems unlikely.

Once the storm passes, they meet a ship captained by a guy named Jared. Other than identifying their ship as the Freedom and claiming their place of origin as the planet Vemla, Jared is fairly evasive about their reasons for being out there. Also, there are a lot of outdated things about their ship: their technology is so old they aren’t even aware of transporters, and no one has told Jared that that name is totally canceled.

Reluctantly, Jared and his senior staff agree to give a grand tour, to which Picard sends Riker and Data. They see plenty of hale and healthy adult Vemlans, but no kids or animals, and Riker’s first taste of Vemlan cuisine nearly scorches his taste buds. But when a guy gets maimed in engineering, it comes out that everyone on board is an android. That revelation raises all kinds of questions, such as: How did the Vemlans make a ton of androids when nothing about their technology or culture indicates that level of sophistication? Why are the androids seeking to colonize a new world? And why did they feel the need to lie about their true nature to a bunch of strangers?

Soon, another Vemlan ship carrying Force Commander Sawliru and a politician named Alkirg, intercepts the Enterprise and gives them the straight dope—viz., that the Freedom is actually the Conquest, commissioned only ten months prior, and that they would like their androids back so that they can dismantle (most of) them as punishment for their crimes, which in addition to stealing a ship include shuffling off their servitude and killing a ton of people. That puts Picard in a real pickle: are the android refugees or are they terrorists? or are they both? Picard is faced with two choices, neither particularly attractive: he can help the androids escape and find a planet to colonize, thus aiding a rebel force and violating the Prime Directive, or he can assist the Vemlan troops in returning their androids, make their android genocide that much easier, and violate the Prime Directive. Since it’s not their load of dishes, he can also just pack up, do a 180, and head back to Federation space. Of course, if he does that, he’s saddled with the profound moral guilt of knowing he could have done something and didn’t. Plus, if he left the androids high and dry, what reason would Data have to ever trust him again? It’s a truly knotty situation.

The Prime Directive is one of Star Trek‘s most enduring concepts, but it is also one of its most deeply problematic. There are myriad fundamental issues with the idea, not least of which are that 1) it paints the Federation as a bunch of arrogant blowhards with the gall to presume that they know what’s best for other races and 2) it all too easily forces good people into the unsavory position of turning a blind eye to suffering that is not only easy to prevent but morally imperative. Picard finds himself in that very bind, ultimately choosing to withdraw from the conflict, though to his credit he despises that idea and is willing to pounce on any better solution the minute it’s proposed. This is a book that has no problem highlighting just how inadequate the Prime Directive is in situations where there’s a clear correct decision, and is far more satisfying than most scenarios involving it.

Naturally, Data gets a lot of chances to shine in this book. It’s hardly any new or unique thing by now to explore his humanity, but Mancour gets at the heart of it in a different way than authors usually do, especially during a very raw conversation with Geordi a little less than halfway through. In general, I felt like Mancour really got Data. In the same way that a true student of Trek knows that, say, “Vulcans don’t have emotions” is an oversimplification, astute observers also realize that Data possesses more emotion and is more prone to emotional responses than his android countenance might suggest. Additionally, in finding his “own people” in the Vemlan refugees and encouraging him to embrace what makes him a “beautiful android” rather than aspiring to be an “ugly human”, the book demonstrates a much more nuanced understanding of what makes Data unique than, for example, Metamorphosis.

There’s absolutely nothing about Spartacus in Voyages of Imagination—the author declined to be interviewed—and I can’t find even the tiniest morsel of information about it online. We know for sure this book suffered some manner of significant delay. From the back of Exiles, we know it was originally scheduled to be TNG #15, which would have put its original date of publication in January 1991, had it dropped when the book that eventually did inhabit that slot, Fortune’s Light, did. In the absence of further concrete information, I feel free to speculate: I have to imagine there was something about the publishing and/or editorial process that wore on Mancour, and he was just glad to be able to wash his hands of it. I mean, we all know Richard Arnold wasn’t exactly a peach, and this book does chip at the utopian image Roddenberry liked Star Trek to project somewhat more than either of the two would have liked. It’s not difficult to imagine some head-butting going on.

Mancour looks to be doing just fine these days. His most high-profile work of late appears to be the fantasy series Spellmonger, in which he’s published an impressive 18 works (eleven novels and seven side stories) over the last eight years, and just this year he successfully Kickstarted a Spellmonger setting book for Dungeons & Dragons 5th Edition and Pathfinder. High fantasy is not generally my cup of tea, but if they’re half as good as this book was, I imagine they’re pretty great. I often end up appreciating the books by authors who only wrote one quite a lot, because I feel they offer an especially fresh perspective. Certainly, I look forward to them more than the tenth bland Michael Jan Friedman adventure in a row. Speak of the devil, look who’s next!

I give Spartacus 4 out of 5 android refugees. This is an extremely thoroughly considered novel, full of long, rigorous discussions on a historically dicey piece of the Trek puzzle. If you like the episodes where they spend all their time hashing out ethics and never pull out their phasers, this one is a must. It’s a shame Mancour never wrote another Star Trek book, because literature is the perfect medium for the sort of approach where core concepts like the Prime Directive can really get put through the wringer without the handicap of a 44-minute time limit. This is the best TNG novel to come down the pike in a minute.

NEXT TIME: Spock and a young David Marcus take on the Klingons in Faces of Fire