(Hey there, readers, just a quick note prior to this review. Star Trek books rarely get too intense to merit content warnings, but there is a pretty brutal depiction of physical abuse in this book that is mentioned in this review. So, just a heads-up.) 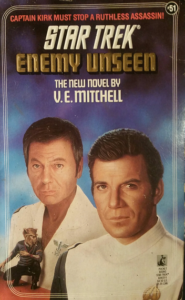 This week, we return to one of the least revisited eras of Trek for a whodunit with the second-string team. An overbearing seductress causes problems for her daughter and her ex; the ship’s guests have a Gordian knot of ideas about harmony and balance and honor that need untangling; and a spy is sneaking around the ship trying to sabotage the negotiations. Why would Spock allow his captain to use a program he knows is unfinished? Have these people somehow not heard of shapeshifting? What is the Enterprise’s porn collection like? Does it actually have one? It’s the book that will at least have no trouble qualifying for the HOV lane.

As the story begins, Spock is departing for a conference back home, but to fill the void left by his absence, he’s thrown together a sort of Vulcan Alexa to aid with logical problem-solving, which he has given the illogically SEO-unfriendly name Assistant. I always find it interesting when authors choose to handicap themselves by removing a character with all the answers (such as Spock or Data) from the equation, and it’s an especially bold move for a first-timer, as Mitchell is here. That handicap is effectively negated, however, by a net gain of two new characters,1Assuming one counts Assistant as a character, which is not so unreasonable an argument. science officer trainee Lt. Tenaida and temporary XO Patrick Brady, neither of whom do as much as Spock does by himself, nor do they perform what abilities they share with him as well as he does. 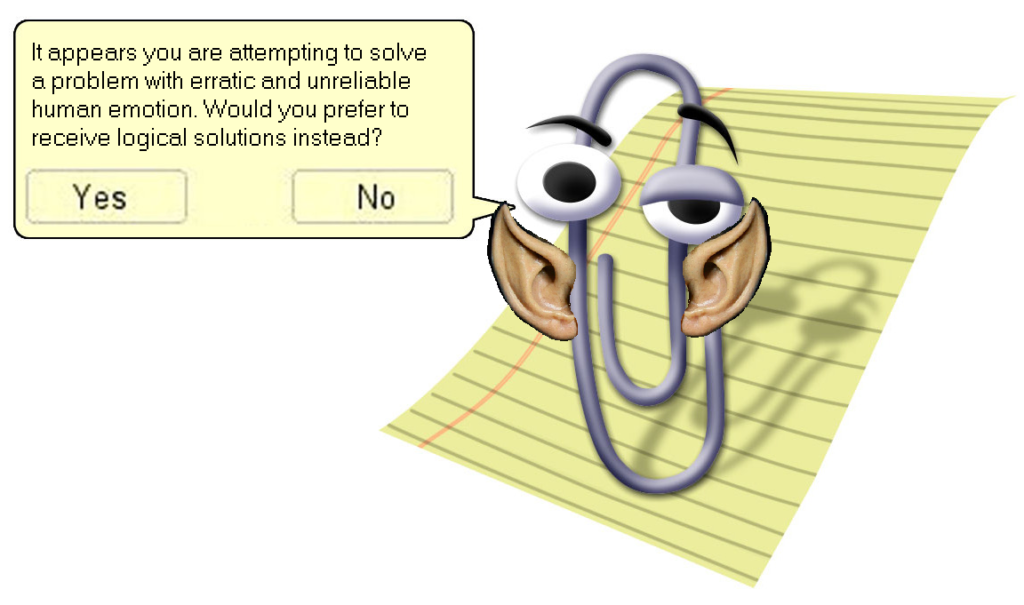 Spock’s choice of interface could use some work.

That glut of characters extends to the rest of the story as well. This is one overstuffed adventure. Besides the multiple Spock substitutes, a Starfleet commissioner is on board to oversee a dispute between two civilizations over colonization rights to a neutral planet, and he’s brought three aides plus his wife, an old flame whose advances Kirk must constantly angrily rebuff. The ambassador for one of the sides, the Kaldorni, also brings an assortment of aides, assistants, and concubines with him onto the Enterprise. (The other side, the Beystohnai Alliance, never figures into it.) On a spacious locale like a planet, the large ensemble may not have stood out so much, but on the Enterprise, it’s more than a bit cozy.

The saboteur is the most imminent threat, going around the ship impersonating key officers, killing minor ones, and constantly changing course to divert the ship toward some cloud thing that never becomes important. Now, when you hear that there’s a possibility that someone is appearing as other people, what comes to your mind? If you’re a normal human being with a working brain, it’s “shapeshifter”, right? Not these maroons. Their first guess is that the saboteur is using “biocosmetic appliances” to approximate appearances, but that’s ruled out because it would be too expensive to keep up high-quality disguises for very long. Then a male member of the Kaldorni contingent shows up as female in medical scans, and they’re asking themselves, “Are we sure it’s not biocosmetics?” “Well, if it’s not, then I’m stumped.” When the reveal finally comes, surprise! The spy is a shapeshifter! [Explosive outrage a la Lewis Black] BECAUSE OF COURSE IT WAS A SHAPESHIFTER YOU STUPID MOTHER—

Maybe it wasn’t as common a thing when this book was written? I don’t know. But it doesn’t seem to me like a shapeshifter is so outlandish a concept that it should take two-thirds of a book for anyone to even consider the possibility. It’s kind of Sci-Fi 101? I just found this really aggravating. All the weird stuff these people have seen in collective decades of space exploration and shapeshifting occurs to none of them for almost 200 pages? Give me a break.

Anyway, Cecilia Simons, the wife of the Federation diplomat Montoya, also presents a major problem. When she’s not hitting on Kirk or anyone else she thinks can help her achieve her goals, she’s trying to intrude on her daughter, Janara Whitehorse, a geologist aboard the Enterprise. Cecilia and Janara are pretty much non-union equivalents of Lwaxana and Deanna Troi, so close in general makeup that I often found myself lapsing into imagining their voices. The only real difference is if Lwaxana was human, hated Betazoids, and was physically abusive. Janara is half-Deltan and has latent telepathic abilities that if properly developed would be unimaginably powerful but instead just make her head hurt a lot. Cecilia didn’t like all the sexy sex Deltans have all the time and uprooted Janara early in her life. They get into a fight at one point, and Cecilia punches her daughter in the side of the head and knocks her unconscious on a computer console.

It’s a brutal scene, and Janara offering the lame lie of having run into a wall when pressed by Dr. McCoy for details is an experience too many victims of abuse have gone through. It feels real, and for my money they’re the most powerful couple of scenes in the book. But Cecilia’s attentions, unfortunately, are divided, and she has nefarious ends of her own to attend to that dilute the power that a deep exploration of parental abuse could have held. Like a lot of ideas in this book that have strong potential, there’s just not enough room to give it the level of development it deserves.

There’s also the matter of the Kaldorni. Between the aforementioned espionage, murder, and flirting, Kirk also has to help the two sides get on the same page, which is not easy since is extraordinarily difficult to unpack the Kaldorni’s convoluted ideas about which actions cause harmony and which ones cause disharmony and what one must do to balance the scales when equilibrium is disrupted. Late in the book, Kirk participates in a ceremony that he doesn’t realize (until it’s over) is intended to pass three of the ambassador’s wives to him, which the Kaldorni ambassador considers a harmonious balancing of the cosmic ledger, since Kirk has succeeded in protecting and preserving them where he has failed.2They got sick and Bones healed them. Kirk tries to argue that since McCoy saved them, they should be obligated to him, but since McCoy answers to Kirk and Kirk is ultimately responsible for McCoy’s actions, the Kaldorni ambassador says they are to be Kirk’s. It’s really kooky, and of course the lack of agency for the women is super-yucky. The whole thing is super-weird, and smacks way too much of a certain early TNG episode for my taste.

Almost no character that did not exist before appearing in this book brings anything to the table whatsoever. Montoya is a total drip who’s totally blind to his wife’s faults and history—and he’s not even covering for her or anything, he’s just dumb. Kristiann Norris, the one aide of Montoya’s who does anything useful, tries to strike up a romance with Kirk, and she’s a fair match for him, but Kirk’s duty keeps stalling out their attempts to get closer. Lt. Tenaida is intelligent, but lacks Spock’s cunning and sly sense of humor. But Patrick Brady is perhaps the book’s most instructive example. He hails from Kirk’s Academy days and is described as a prankster and cut-up, yet he never once says or does anything even remotely amusing. It’s mentioned he decided to start taking his career seriously at some point, but evidently buckling down required excising anything resembling a sense of humor. The concept isn’t the problem; we’ve seen before that a new temporary officer can bring with him a breath of fresh air, stir the pot, and challenge the status quo. When Stone stepped in for Riker in A Rock and a Hard Place, he brought chaos, danger, unpredictability, and a deep distrust of authority that derived from a compelling personal experience. Brady is a cardboard cutout, as is practically every new character introduced here.

As the book hurtles toward its conclusion, it reaches a climax only because that’s what books are supposed to do. The murderer finally gets sloppy only because time and page space are running out, and everything wraps up nice and pat, with one thread resolving as late as the penultimate page. There are so many elements here that could be fully explored in a book on their own, but they all get the short shrift because they have to coexist within the usual ~275-page boundary of an average Pocket Books Trek novel. Enemy Unseen is a mess the likes of which we haven’t seen in a while. Even a perfectly programmed version of Spock’s Assistant would have trouble offering logical solutions for cleaning it up.

This week we pour one out for Ensign Yendes, one of the victims of the elusive shapeshifter. Yendes gets the Toast for the particularly graphic depiction of her death, which involves her entrails being strewn all over the console in auxiliary control. That’s a pretty nasty way to go. Sorry, Yendes.

I give Enemy Unseen 1.5 out of 5 computerized assistant programs. Not an auspicious start for Mitchell. The more deeply I think about this story, the more I hate it. It’s got too many characters who aren’t adding value and they’re all passing around the idiot ball. Trek whodunits are rarely all that compelling, and too often they lapse into obviousness, leave colossal openings for major criticisms, and make Star Trek look stupid—and as I’ve said before, boring can be forgivable for Star Trek, but stupid rarely can. A few authors have had worse debut Trek novels, but not many.

NEXT TIME: Finding a new home for the Exiles