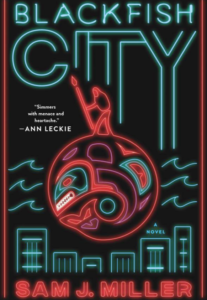 I’ve gotten far enough ahead on Star Trek reading to feel comfortable checking out some other stuff, and first up came Blackfish City by Sam J. Miller. It’s the future, and climate change has wrecked most of the continents, so now people live on these island cities in the Arctic powered by geothermal energy, such as the one in this story, called Qaanaaq. Of course, it’s the same tune with a different beat—there are still those who are obscenely wealthy and those who are unbelievably destitute doing anything they can to scrape by. But then a woman who can step to all comers shows up riding a killer while and shakes up the social order, and several characters from wildly different walks of life find a connection they never realized they had.

I found Blackfish City on a list I found on Twitter recommending books that prominently feature gay and/or non-binary characters. It’s an easy book to read—the chapters are short and digestible; despite the complexity of the story’s world and history, you don’t have to do a lot of heavy mental lifting; and realizations occur to you naturally about a page before you get to the reveal. The end also left open the possibility of a sequel, which I’d be down for. I’d like to see more stories set in this world.

Obviously, the greatest piece of marching band-related media of all time is the SpongeBob Squarepants episode “Band Geeks”, and it’s not especially close. But another pretty good one is Sound! Euphonium, a high school anime following Kumiko Oumae, who joins the concert band upon reaching high school and tries, without much success, to get away from the instrument she’s already spent most of her life to that point playing: the euphonium. I absolutely love the super-detailed drawings of the instruments (one of the qualities that initially drew me in to Food Wars, an anime that’s otherwise difficult to watch without constantly looking over your shoulder). It’s also really low-stakes, which is a quality that for some reason I very much appreciate in an anime.

Also, despite reading plenty of recap articles about it, I’ve never actually watched much of what is commonly called “prestige TV”, but now on a whim I’m watching Mad Men. Only eleven years behind! Absolutely none of these people are likable at all whatsoever, and yet, seven episodes in (as of this writing), I’m riveted. Shrug.

There are a lot of bands I like just fine that I would absolutely love if they only did instrumentals. Numerous funk bands come to mind, for example, like Orgone. Another is the synthwave group TWRP. “Time to Shine” absolutely rocked my face off when I first discovered it, but nothing since then outside of “Atomic Karate” has really caught my interest. Until, that is, I got a load of “Feels Pretty Good”, off their most recent album Together Through Time.

Essentially, it’s their attempt at doing a Chuck Mangione-esque piece in their own style (fairly obvious from, among other clues, the title, the tempo, and the style of the guitar playing/sound). I’ve been a Mangione fan since we did a marching show based around his work my junior year of high school, and this song presses all of those buttons for me. The first time I heard this, I think I listened to, no lie, like … at least twenty times on repeat? It’s good. It’s real good.

And that’s it for this edition of Shore Leave. Stay smooth, folks.