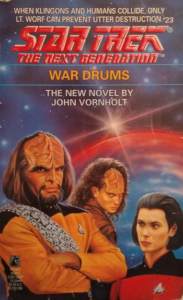 This week, when a Federation colony asks the Enterprise to spray for wild Klingons, Picard disrespectfully declines, but sends Worf down to broker peace. Meanwhile, Ro Laren realizes she has more than just affirmative action to worry about when the bed bugs begin to bite. Will Worf persuade the wild Klingon children to pursue peace? Can Ro explain to the villagers why the wavy lines on the seismograph are bad before a sentient tsunami picks everyone’s bones clean? And who’s better at hide-and-seek: Data or Deanna Troi? All this and more in War Drums, the book that, unfortunately, features no dinosaur hunting.

It’s hardly surprising that a franchise that has been around for over half a century would, in that time, find several ways to trip over its own feet. One way in which Star Trek occasionally manages to do this is to undermine an instance of poignant human drama by pinning its cause squarely on some inscrutable alien origin.

An example that springs to my mind is the season 7 Next Generation episode “Eye of the Beholder”. An engineering officer dies by suicide, and everyone is forced to confront some hard realities about their alleged utopia. What drove him to do it? Why didn’t he take advantage of the considerable medical, psychological, and social resources of the Enterprise? How could a society that has largely managed to eradicate problems such as this have failed this young man? Undoubtedly, some tough questions to contend with. But then Deanna begins to succumb to the same thing, and the episode starts going in a different direction entirely. It’s not an unsuccessful episode, but it is one I think might have been better serving by sticking to its original conflict.

The same sort of thing happens in War Drums, our second consecutive Trek novel by John Vornholt. The president of the New Reykjavik colony on the planet Selva asks the Federation to exterminate a population of wild Klingon children whose savage attacks prevent them from going outside their village. But although their problem is legitimate, they’re hardly the poor put-upon victims they fancy themselves. During the Enterprise crew’s initial visit, the colonists out themselves as mega-racists almost immediately and with a stunning lack of guile. They’ve also got one of the Klingon children kenneled in squalid conditions out in the backyard, which makes Picard’s blood boil. This got me excited, since angry Picard is my favorite Picard, but alas, he settles into a decidedly more minor role shortly after that first survey.

Instead, we get Worf and Ro Laren, the latter making a big splash in her first appearance in a Star Trek novel. Ro is assigned to monitor troublesome seismic activity in the Selvan ocean, but the people of New Reykjavik are no more pleasant to Bajorans than to Klingons. She makes a couple of friends—a precocious girl named Myra Calvert and her dad Gregg, the colony’s chief of security—but everyone else gives her a shoulder so cold, their decision to name their colony after a city in Iceland begins to make a sick kind of sense.

Believing Worf may be the key to bridging the vast chasm between the two cultures, Picard sends him out as an unlikely peace ambassador. The denizens of New Reykjavik, however, are so comprehensively loathsome that Worf decides he’ll have a better chance of success by going out in the hot, humid jungle and wrestling with Klingons, a task on which he is accompanied by Data and Deanna Troi and guided by Turrok, he of the unimaginably awful captivity described earlier. The three officers pass a battery of tests and win a number of young Klingon converts to their cause, but some holdouts remain, including the leader of the children, Balak.

This is where that self-tripping I was talking about earlier rears its head. Data trails Balak on one of his visits to “the Goddess”, an unknown humanoid woman who tortures Balak with a plasma whip and punishes him for pursuing peace with “the flat-heads” rather than killing them outright. Romulan interference is suspected, and although there’s at least one small hint that they could maybe be involved, I was like, “Nahhh.” But it’s totally a Romulan! It couldn’t be that the humans are simply terrible people, as we sometimes (…okay, often) are. Why point the finger selfward when you can make a single alien interloper the sole source of the discord? Once again, Next Generation’s allergy to truly serious engagement with social issues and its unwavering commitment to a shiny, happy future end up shooting a compelling story in the foot.

Still, despite the maddening “TNG gonna TNG” reversion, this is a pretty decent book with a lot of solid Worf action. I’m normally fairly bored by Worf stories both on the screen and the page, but Vornholt gave the character some decent and unique things to do, and he smiled a lot, which I found weirdly satisfying. Ro Laren also comes across nicely and gets an excellent showcase that brings all of her best qualities to the fore. And while it’s a bit obvious in how it plays out, it at least thankfully isn’t trying to be a murder mystery or anything. As long as you don’t expect anything too profound from it, War Drums will probably adequately entertain you. But I really wish it wasn’t asking too much of TNG to really gaze into the abyss every now and then—not that I want it to get dark or edgy for its own sake, but you know.

I give War Drums 3 out of 5 squalid cages. Despite the fact that the impact of this tale of virulent racism is watered down by alien interference, it’s still more or less a fun ride. Worf and Ro Laren both make the best of their respective situations and shine in their time in the spotlight. It’s a fine book—just don’t expect it to make any of the bold moves it sets up.