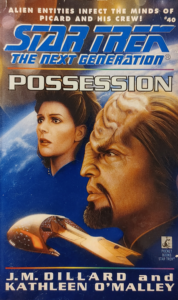 This week, a malevolent evil has returned, and this time, it’s learned how to meditate. But if Data, Worf, and Deanna can’t build a proton pack that will hold it, it’ll turn the upcoming science fair into the ultimate superspreader event. How many Earth expressions is Worf actually familiar with? How much of J.M. Dillard’s touch is really in this book? And is the redshirt death in this book the most senseless one yet? All this and more in Possession, the book that leaves ’em laughing.

Possession
Authors: J.M. Dillard, Kathleen O’Malley
Pages: 281
Published: May 1996
Timeline: Between “Attached” (S7E8) and “Force of Nature” (S7E9)
Prerequisites: You would think Demons (TOS #30) would be one, but it informs way less of this book than expected

Way back in the earliest days of this site, which covered the early 80s when TOS was the only game in town and it was nothing but TOS novels for almost an entire calendar year, one of the books from that time was a novel called Demons, the sophomore effort of a spunky young writer named Jeanne Kalogridis, better known to legions of Trek readers as J.M. Dillard. Demons was, as I recall, not great: the mind parasites were somewhat ill-defined, Spock had a protégé that was made out to be one of those annoying original characters who shows up for their first day of work and is already better at all the senior officers’ jobs than they are but actually turned out to be some undercover agent, and Dr. McCoy spent most of the book being a literal burden. Demons is my lowest-ranked Dillard novel to date, so I find the choice to revisit that one in particular a little peculiar. Maybe she was just really sentimental about it.

Actually, on paper, it isn’t the worst idea. The Next Generation gang’s approach to problems is different enough from the TOS crew’s to easily justify a new story with the same premise. Unfortunately, what wound up happening was that this story was also bad, just in different ways. Dillard was assisted here by Kathleen O’Malley, a close friend and writing partner of Ann Crispin, and from the few terse and unrevealing comments Dillard has made that I could find, it seems like O’Malley carried the significant majority of the weight on this one. Dillard says in Voyages of Imagination simply that revisiting Demons in TNG seemed like it would be fun and was, and in the book’s acknowledgments mentions only that O’Malley “came to [her] rescue during a very difficult year.” Between that and the writing style, it seems to me Dillard didn’t actually have a whole lot to do with this book, and if that is the case, it certainly shows.

This time, the superspreader is Skel, a Vulcan who’s been studying the parasites since their return to dormancy eighty years prior. Skel has a powerful personal connection to the parasites, having had a traumatic experience with them as a child where his father got infected and killed his mother. Her katra still lives inside him, acting as a kind of Vulcan Spidey sense, and she also serves other psi-friendly folks in the same capacity throughout the story. It’s not quick enough, however, to warn him away from getting kidnapped by a scheming Ferengi DaiMon and his decidedly less enthusiastic brother. Unfortunately for those two, the parasites have also been shacking up in Skel’s head since that fateful night, and they’ve learned a thing or two about Vulcan control and patience in that time. Now, at last, they see their opportunity to branch out, and that opportunity is the TechnoFair, a science expo featuring representatives from a staggering number of Federation member races, many of whom are being transported by the Enterprise.

This is the kind of book where any character being even a little bit less credulous at any point would have gone a long way. Instead, they let Skel out of quarantine just because his vitals check out, at which point he proceeds to gaze into the eyes of everyone he can and spread the infection. Even several senior officers succumb, although Picard puts up a valiant fight. Eventually, only Data, Deanna, Worf, Alexander, and a scientist attending the TechnoFair named Kyla Dannelke are left to fend off the infected hordes and figure out a way to trap the malevolent spirits. If they can’t, the TechnoFair will go down in history for much different and worse reasons than anticipated.

Although Possession is a direct sequel to Demons, it goes out of its way to avoid any kind of direct textual link to its predecessor. It wasn’t that long before this that the prospect of sequels to original material was completely off the table; perhaps this was a test of the waters enabled by Dillard’s clout. Whatever the case, you aren’t missing anything if you haven’t read Demons, which is at least a win for accessibility. In fact, it’s actually probably better if you haven’t, since if you have, the reluctance to talk about specific characters and events from it can prove somewhat maddening. The nature of the infecting spirits remains as vague as ever as well, outside of some speculation about their use as a biologial weapon, so if you read Demons and you’re hoping Possession will enrich its lore, keep hoping.

In addition to being a peculiar book, Possession is also a rather amateurishly written one. We’ll talk more about how thoroughly it abandons some plot points in a more apropos part of the review, but there are other problems too. An excess of exclamation marks serves to ironically undermine the excitement, and there are a lot of moments that make you wonder if the authors have ever even watched the show they’re writing about. Most of these involve Worf in some way. He and Alexander have a far less adversarial relationship here, which you would think would be a nice change from the norm, but instead somehow feels plain wrong. There’s also no mention of his fledgling relationship with Counselor Troi, which is odd for a story set in season seven. Instead, he’s got a thing with Dr. Dannelke that is so chaste, it’s practically nonexistent.

I did get one big laugh out of this book. It came at the very end, when it has the audacity to cap things off with a tease for another sequel. No thank you, check please. Two of these is quite enough. I’m pretty bummed that Possession failed to capitalize on the significant room it had to improve, but if two books can’t produce something good from this premise, I doubt a third one would have.

Bad. As a direct sequel to the TOS novel Demons, Possession fails to make the most of the ample opportunity that not-very-good book provided to enhance the concept and deepen the lore, and turns out not very good itself in the process. There are also some gaping holes in its knowledge of basic character dynamics that make it difficult to take seriously. Due to some undefined confluence of external pressures, I suspect Dillard wasn’t able to contribute much of her strong writer’s voice to this one. Her name may be on the cover, but evidence of her talents is tough to come by inside.

NEXT TIME: A subjective review of Objective: Bajor