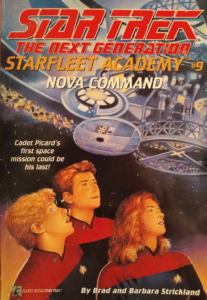 This week, Cadet Picard confronts the uncomfortable truth that there’s always someone better than you. But when he and his friends run into trouble on an elite training exercise, they aren’t sure if it’s the Kobayashi Maru or the real deal. Can total jerks have bits worth stealing? Who should be getting Academy buildings named after them? And will white people ever stop claiming Cherokee ancestry? All this and more in Nova Command, the book that forces a revision to the “Boothby is a Q” theory.

Nova Command
Authors: Brad & Barbara Strickland
Pages: 116
Published: December 1995
Timeline: Right after Starfall (TNG YA #8)
Prerequisites: Starfall is succinctly recapped in the text and thus not actually fully necessary to read before this. The character of Marta Batanides originated in “Tapestry” (S6E15).

Our final book of 1995 returns us to Picard’s days at the Academy—and this time, he’s actually at the Academy! Picard’s freshman year begins with a convocation featuring no less a guest speaker than Spock himself. During the Q&A, Picard asks Spock what advice he would have liked to have received as a green cadet. Spock gives an excellent answer about turning a crisis into an opportunity and an adversary into an ally where possible, which, naturally, you can expect to go on to be a pretty major theme in this story.

Admiral Silona tells the cadets that one in three of them won’t last the whole four years. Young Jean-Luc is determined to come out on the winning end of that statistic, but his style is cramped by a cocky blowhard named Roger Wells, a government minister’s son who seems to be just a bit better than him at everything. In the meantime, he meets his “Tapestry” friend Marta Batanides and computer science/artificial intelligence major Tom Franklin, all the while fighting to stay on top of his class workload and as many steps ahead of Roger as he can. The relentless hump-busting pays off when Jean-Luc becomes one of a handful of first-years to make a Nova Command squad, which will give him his first taste of space duty—a warp drive–less, solar system–restricted taste, but a real taste nonetheless.

Tom, who designed the program that creates the team assignments, puts himself, Jean-Luc, and Marta on the same team, but also includes Roger, mistakenly assuming he and Jean-Luc are friends. Taking orders from First Officer Wells is a raw enough deal all by itself. But then their captain comes down with a bout of sickness that forces her to place her body in a dormant state, leaving Roger fully in charge. Predictably, the arrogant trust-fund baby wilts under the slightest modicum of real pressure, leaving Jean-Luc, Marta, and Tom to figure out what to do about a pair of miners about to be annihilated by an incoming black comet.1More properly known as a neutron star, or in the book’s words, a neutron core. The book persists in using the phrase “black comet”, however, probably because it sounds cool. Don’t try to Google “black comet”—you’ll only turn up something from Shadow the Hedgehog. Just glancing at the Wikipedia article, I’m guessing they work somewhat differently in the book than they would in real life in order to maximize dramatic tension. There’s also the question of whether the distress call is even real, or merely a ruse planted by Starfleet for the cadets. And all the while, time and fuel are running dangerously low…

Realistically, Nova Command had almost no chance of topping the stratospheric bar set by its predecessor, Starfall, but it sure does give it its best shot. Typically, the YA books lose a little of their punch when forced to emphasize action over matters of humanity, and with Picard now fully immersed in the hustle and bustle of Academy life, it was bound to happen. Still, each scene is written with the Stricklands’ usual crisp and un-patronizing élan, and though it doesn’t feature anything as compelling as Picard’s struggles with his father and brother, it’s still firmly in the upper echelon of YA efforts to date.

Where it falters most is in its very un-Boothby-like failure to prune a few go-nowhere developments from the rose bush. Tom invites Jean-Luc to attend a practice with an informal group that plays a Native American stickball game called toli; it never comes up again. A long, detailed scene of Picard practicing on a simulation is neat, though not especially vital, and ultimately feels like it’s just padding the page count. Least successful in this regard is an attempt to put strain on Jean-Luc and Marta’s fledgling relationship by having Roger and Marta arrive at the mission departure fresh off of having spent some time together. Jean-Luc gets jealous and assumes Roger is move in on Marta to get his goat, and Marta says it’s not what it looks like—but then, we’re never privy to what “it” actually is, and it fizzles out, only to be resolved by default with the success of the Nova Command mission. Starfall was admirably free of baby fat, so to see so much of it dangling off its successor is a bit unfortunate.

If it sounds like I’m being hard on Nova Command, let me impress upon you again that I really did like it quite a bit, and that what I’m expressing here is borne of the feeling of going back to sirloin when you’ve tasted filet mignon. Nova Command does have a few actual faults, but for the most part, its biggest crime is not being Starfall, which is hardly any reason to deny it a recommendation. Few books, even the ones ostensibly geared toward adults, can match Starfall‘s excellence. Nova Command is still more than solid in the standard milieu, and that’s perfectly okay.

Good. Nova Command may not transcend the formula so beautifully like its predecessor Starfall, but it still performs well within the more standard rubric, and makes a worthy addition to the Starfleet Academy line. It’s a little flabbier than it ought to be, and the cocky rival trope is starting to show a considerable amount of wear, but it’s another enjoyable kid mission.

NEXT TIME: Scotty spins us right ’round in Twilight’s End