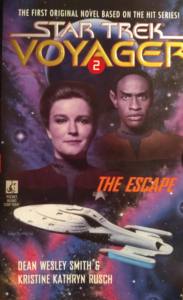 This week, when Voyager plunders an abandoned shipyard for parts, Neelix takes his most felonious nap yet. But when an intelligence agent arrives to scare the dumb-dumb planet-hoppers away, he realizes he might be getting too old for this s___. Can B’Elanna, Harry, and Neelix beat the system? Will we ever get to see the Back Room? And how amazing does a Bolian cheese tower sound? All this and more in The Escape, one of those time travel stories I’m not sure I’m smart enough for!

Lieutenant Torres trashes the first of many shuttlecraft trying to get ore for critical engineering repairs from a turbulent asteroid belt. When that excursion goes sideways, Neelix recommends hitting up Alcawell, a nearby planet with tons of abandoned ships ripe for looting. Only one caveat: Alcawell is, in his parlance, “haunted”. Be that as it may, the ships are in mint condition and have the metals they need, so Janeway sends Torres, Kim, and Neelix down to check things out. While investigating inside one of the ships, Neelix sits down for a rest, and in the process accidentally activates an unknown mechanism. All they can ascertain is what the tricorder tells them: that Voyager is no longer in orbit, and that they’ve been displaced 310,000 years back from their own time.

That may sound like a lot, and yet it somehow isn’t enough to steer clear of the long arm of the time law. See, the people of Alcawell prefer to jump about time rather than space, and as such, they have very stringent rules about it. Time on Alcawell is divided into 500,000-year periods, and no one can travel within a period in order to avert paradoxes. In going back less than 500,000 years, the trio accidentally commit a felony called a Time Breach. B’Elanna, Harry, and Neelix try so hard to escape, cause so much trouble, and necessitate so many paradox-risking back-jumps to thwart their plans before they complete them that their case is taken all the way to Alcawell’s central temporal agency, Control, another 444 million years in the past, back at Period One.

Back in the present, Janeway and the remaining senior officers contend with two Alcawellians who have come to their time: Kjanders, a time criminal who’s ready to trade time for space, and Drickel, an agent sent from a top-secret division of Control called the Back Room to spook Voyager away from their time transports, who quickly finds himself in hot water when his assumption that they’re dumb and gullible enough to fall for his basic techno-tricks doesn’t pan out. Meanwhile, the fate of the three accidental felons rests in the hands of a bureaucrat named Rawlik, who is sympathetic to their plight but not especially optimistic that they or he can figure out a way to extricate them from it.

As of this writing, I still haven’t made it to Voyager in my dutiful review of the canon.1I’m close, though. Less than a season of DS9 to go! However, I have a hard time imagining that any first-season episode gets as wild and woolly as this book does. The Escape comes courtesy of Dean Wesley Smith and Kristine Kathryn Rusch, the husband-and-wife team that penned the Deep Space Nine novel The Big Game under the pseudonym Sandy Schofield, claiming their names wouldn’t fit on the cover. But the leaner, smaller font of Voyager’s covers accommodates their lengthy names just fine. Good thing too, because The Escape is the kind of work one ought to be proud to have their real name attached to.

Not every tie-in novel has the luxury of pushing its parent property to the limits of imagination. But the first original book of a series has a special opportunity and is in a unique position to do so. Of course, there’s a dark edge to that—flying Odo still haunts my nightmares—but it can produce interesting results. For example, I maintain that for all its off-model character work, Ghost Ship is a compelling story with solid bones. (It made enough of an impression to get semi-ripped off in season five, in any event.) The Entropy Effect, of course, remains the champion of this slot, what with Sulu’s Fu Manchu and the audacity to kill Kirk—in fact, it might be all the more impressive for getting so outré with such a well-established crew. But The Escape is the first #2 to go the whole ten rounds against that beloved Vonda McIntyre story. (It might not be such a coincidence that both stories prominently feature time travel.)

Going mostly off of fuzzy memories of the characters, I’d say they all behave more or less correctly, which is an outstanding feat for a pre-series commission. Alcawell is inundated with thickets of red tape, which can be tough to make interesting, but Smith and Rusch make it fun by showing a good sense of which details to dig deeper into and which to gloss over, an approach they also apply to the time travel elements. Drickel is also a very fun character, clearly enjoying his job despite how much it exhausts and frustrates him, and his underestimation of the crew’s unflappability and capacity for reason, especially Tuvok’s, is delightfully written. The repeat pairing of B’Elanna and Harry is a tad unfortunate, but tossing in Neelix adds a decent wrinkle, and it’s done well enough to not present an issue.

As far as the time travel parts go, there were times when I felt the temporal shenanigans were starting to get a little bit out of the reach of my antique brain, and in a denser novel they might have, but The Escape‘s compactness and brevity work to its advantage. Again, Smith and Rusch have an acute sense of when to get into the technobabble and when to leave well enough alone. Their conception of the use of time travel for law enforcement does sometimes present an unusual double-edged sword. As mentioned above, Control stops the three from trying anything funny simply by sending a huge squad back to the point right before they move to carry out their plan, which has the odd effect of making total sense from a law-enforcement standpoint while also taking the pleasure of seeing that plan in action away from the reader. It may depend on how much the cleverness of it tickles you, but I found it amusing even though the structure of it necessitated the telling over the showing.

It’s the most human of urges to compare things to each other, and ultimately where my mind goes when thinking about The Escape is to all the DS9 novels we’ve read so far. We’re eleven books into that series, and only a handful of them have managed to achieve the barest of liftoff. But Voyager hit the ground running with an immediate winner, which puts even more of a burden on the inevitable subpar efforts to come but gives me a little more anticipatory excitement for Voyager books. I’m latently aware tha Voyager gives in to a tendency to dive headlong into goofiness more often than a lot of folks would like, but I’m interested in seeing how the feelings I come to develop about it will stack up to the feelings I’ve cultivated about the other series since I started this site.

Voyager wasted no time cranking out a banger on the novel side. The Escape makes both time travel and byzantine bureaucracy fun, and it’s helped immensely by the fact that Smith and Rusch have a perfectly calibrated sense of when to get up to their elbows in the wacky and when to let the finer details slide. Everyone behaves in character as far as I can tell, which is no small feat for such an early effort. I fear the bar for purely episodic shenanigans might have been set a little too high by this book, but we’ll just ride the waves as they come.

NEXT TIME: Something’s eating at DS9 in Devil in the Sky