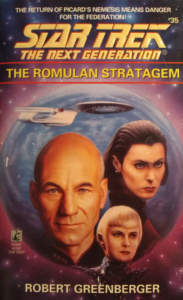 This week, Picard and Sela drag out their best Kirk speeches in hopes of closing a sale. Meanwhile, Ro Laren winds up on the hospitality beat and lands elbow-deep in one of the worst kinds of boy trouble. What’s the correct take on cargo pants? What’s to be done about the lack of synonyms for “android”? And who do we talk to about getting an anthology of Guinan’s exploits on Risa? All this and more in The Romulan Stratagem, the book that isn’t afraid to name-drop a deep Poe cut.

The Romulan Stratagem
Author: Robert Greenberger
Pages: 273
Published: May 1995
Timeline: After “Face of the Enemy” (S6E14), though probably more specifically sometime during season 7, since Ben is mentioned at one point
Prerequisites: Some familiarity with Sela’s various appearances [1] [2] [3] [4] is a fairly good idea

The planet Eloh, a world in a strategic position between Federation and Romulan space, is looking to get involved in the space game, and they’ve invited both sides to pitch them on the benefits of their respective alliances. But when Enterprise gets there, they find the Romulans have already been there for a minute, Premier Daithin being simply committed to hearing both sides present their cases. Even more surprising than the Romulans showing up first is the fact that Sela is in charge of the mission to convince the Elohsians to choose the Romulan Empire. The job is considered a lowly assignment by her superiors, but Sela is determined to turn it into a success that she can use to parlay into recovering her old status and bouncing right back to the top.

Eloh touts a recent push toward global unity after a protracted civil war, but many of their old prejudices still seem to be bubbling at the surface. Things reach a head when a power plant that Deanna and Geordi are touring suffers an explosion, and evidence that suggests a human culprit paints Geordi as the prime suspect. Thankfully, he’s quickly exonerated, but the crew sees that they’ll have to stay on their toes. Not long afterward, a targeted chemical explosion, this time traceable to a Romulan interloper, takes out a neighborhood near the parliament hall where Data is observing Sela’s open forum. With detective fiction once again enjoying yet another spate of popularity among the Enterprise crew, Data, in an investigative mood, gets permission to look for answers among the rubble. While combing the scene, he encounters Sela, who appears genuinely shocked that a Romulan seems to have gotten away with something like this on her watch, on a more personal, less authorized fact-finding hunt, and the two agree to work together to get to the bottom of who’s trying to sabotage both sides of the mission.

Meanwhile, back on the Enterprise, after Ro Laren throws a teacher into a wall in an effort to expedite putting out a fire, Riker thinks she could use a bit of an image rehabilitation among the ship’s civilian element and makes her the new orientation officer. The first family she’s assigned to acclimating are the Kellys, whose teenage son James immediately develops a huge crush on her. Enough of the story is dedicated to Ro trying to shake James off with limited success that you can see how she earns the cover billing, but don’t be fooled by the action pose: this is all she gets to do here. It’s not a great subplot, but it is at least in keeping with the kind of thing you get from more episodes of TNG than you would like.

Robert Greenberger is a name we’ve seen before, albeit not by itself. He’s a writer who’s generally more on the comics side of Trek, but has previously contributed to two collaborations, the unremarkable TNG novel Doomsday World and the decidedly stronger TOS effort The Disinherited. Dave Stern, the Pocket Books editor at the time, thought him capable of a solo effort. Was his faith properly placed?

Greenberger seems to find quite a bit of pleasure in describing mundane activities, especially taking tricorder readings, in a way that plays up how inwardly pleased all of the characters are with a routine job well done. Although it doesn’t exactly make for the most gripping prose, there’s a charming quality to its execution that feels like a warm blanket. The Ro Laren thread also kind of hits this way. It’s funny how these frivolous B-plots and domestic trifles often seem annoying when you’re watching the show and wishing it would do better by its characters and try harder to live up to its maximum potential, but when a book indulges those same and captures their tone accurately, it’s amusing. Probably says more about me than anything, I’ll admit.

It’s hard to say more about The Romulan Stratagem without wanting to talk at length about its ending, which legitimately shocked me because I’ve gotten far too cozy with TNG conventions. That sentence alone probably implicitly reveals more about how it generally goes than I’d like to spoil, but I’ll say that that ending singlehandedly takes the book from a 😐 with some agreeable qualities to a solid 🙂. In retrospect, it makes me want a book where the events of the ending happen a lot sooner in the story, and the bulk of the text is about how Picard and the others deal with the consequences of it and the emotions it evokes. But it also works as a heavy orb of unpleasantness that you’re just sort of left having to have sit on your stomach, as well as making sense in terms of wanting Sela to continue to be a credible threat.

So yeah, I think Greenberger acquitted himself pretty well on his first solo venture. Sela shows a little more of her human side here to great effect, and both she and Picard get more than one chance to show off their formidable rhetoric skills in appealing directly to the Elohsians. I also appreciated how Greenberger throws some nods to Edgar Allan Poe’s pioneering strides in the detective genre into the mix alongside the usual fawning over Holmes and Dixon Hill, just for something a little different. I didn’t go into this one expecting anything mind-blowing, and for the most part I was proven right. But it’s okay to not have your mind blown every time you crack one of these books, and in at least one aspect, this one did manage to do just that, and so on that score I have to give it due credit.

The Romulan Stratagem is probably not one of the greatest examples of Star Trek literature ever committed to paper, but it does a few very important things very right. It strikes a tone that for much of its readtime makes it a comfortable if not terribly exciting read, but its surprising ending makes it worthwhile to see how it leads up to the end all by itself. Pretty much all of the characters behave the way you would expect and want them to, and though it takes a while to be sure that it’s a satisfying piece of comfort food, it is in the end just that.

NEXT TIME: Torres, Kim, and Neelix commit time crimes in The Escape