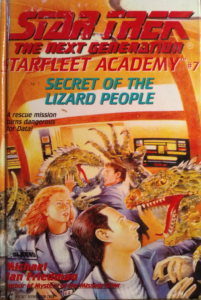 This week, Data can’t wait to enjoy a rare celestial event with his new man-crush. But when a detour for a distress signal proves deadly, the adults are all too willing to use the cadets as meat shields. Do the lizard people actually have a secret? Is Data a good judge of character? Is it time to start seriously taking the artwork in these books to task? All this and more in Secret of the Lizard People, the book that might be socking it to the Mets.

Data’s class is chosen to witness a real-life occurrence of a “super-Jovian planet ignition”, a celestial event where two gas giants of sufficient size collide and the bigger one undergoes fusion and becomes a star (a thing that’s at least theoretically possible). Data gets made fun of by a couple of first-years, but gets bailed out by Glen Majors, a second-year he finds totes ✨ d r e a m y ✨. Majors’s handsomeness, athleticism, and intelligence have captured Data’s imagination, and he looks forward to absorbing all the knowledge he can from his amazing new friend. Sinna, the only one of the four Yann kids to carry over from Mystery of the Missing Crew, is less than thrilled to find this budding bromance threatening to overtake their deep, unshakeable, weeks-long friendship.

En route, the ship transporting the cadets, the Republic, gets a repeating distress call from a station that crashed into an asteroid. It probably wouldn’t do to let the station and any potential survivors aboard it get destroyed by the impending super-Jovian event, and they’ve got enough time for a pit stop, so Captain Clark decides to give the cadets some field experience and send them over to see what’s up.

While searching the station, the cadets and their adult supervisors are accosted by yellow bipedal lizards with purple eyes. Data fends them off for a second, . The real mystery hits when they happen upon a garden and find some aliens in a comatose state. Dr. Steinberg, the CMO working with Data, Sinna, and Glen, theorizes that they and the lizards are related species, sort of like Homo sapiens and apes. There’s got to be a link between the yellow lizards and the comatose aliens—but what can it be? And can they figure it out before they miss the super-Jovian ignition? or get torn to shreds by wild lizards?

Overall, Secret of the Lizard People is one of the more purely fun Starfleet Academy books. It’s also a tighter race against the clock than I expected, with better and more suspenseful pacing than this line of books has had so far. The lean ‘n’ mean, get-in-get-out, bing-bang-boom quality that some of Friedman’s books have taken on recently seems to be in evidence both here and in Mystery of the Missing Crew. Friedman has had his name on a lot of these books of late, and there are often references to him having piles upon piles of work in recent books’ introductions and about-the-author paragraphs, so I wonder if he simply got in a groove of cranking out product during this time. I also wonder if it’s only a matter of time before the amount of labor becomes evident and one of these falls flat on its face. Still, the fact that they’re still reasonably enjoyable is some kind of testament to some kind of skill.

As the kids’ line of books goes, Secret of the Lizard People is agreeable enough. It kept a smile on my face for most of the duration, anyway. I have to wonder, however, if these aren’t starting to run out of steam, though that may be a product of Friedman having a ton of work on his plate during this time. Trimming down to just Sinna streamlines the character load, and even though only Data gets anything of note to do, this one is more enjoyable than its predecessor.

NEXT TIME: Sisko and Kira see a sentient ship off to Valhalla