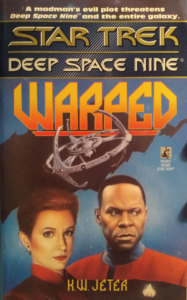 Ahrmant Wyoss’s attempt on Sisko’s life on the promenade isn’t the only such act to happen recently, but since it’s the first one to target a character in the main credits, it’s time to launch a serious investigation. The murderers’ minds all seem to be grafting aspects of some other world or fantasy construct onto the regular reality. That fantasy is coming from a new line of tampered holosuites installed in a remote part of the station. The altered holosuites contain a banned technology called cortical induction (CI), which bypasses the usual tactile sensations the holosuite ordinarily offers and taps straight into the user’s brain. If used often enough—and it doesn’t even have to be that much—CI can begin to permanently transform a user’s perception of reality.

The owner and operator of the snuff suites is a guy named McHogue, a former business partner of Quark’s, though Quark now claims there’s something ineffably off about the guy if you look into his eyes. But a weird look isn’t enough to put off McHogue’s clientele—least of all the Severalty Front, a Voltron of all the political factions Kai Opaka was appeasing before the answered the call of the Prophets. They love McHogue so much that they repeal Bajor’s restriction on non-natives holding government positions to make him their new Minister of Trade.

As it happens, the murders are merely the result of a small test of the CI tech. McHogue announces a greater plan to turn Bajor into a hot-ticket pleasure planet by building a new city that features the CI holosuites front and center. But of course, there’s more to the scheme than meets the eye. McHogue is starting to ramp the CI up to lethal levels, and not to tell a savvy entrepreneur how to run his operation, but most successful business ventures tend to not kill off their customer base. He must have something more in mind then, and he does. Something that stands to tear apart the very fabric of the universe…

Although Bloodletter was not that great, someone must have seen enough good in it to imagine K.W. Jeter was up to the task of writing Deep Space Nine‘s first hardcover event novel. To put it bluntly, however, that person imagined wrong. Warped is a hot mess that barely makes any sense and features some of the most jacked-up narrative escalation I can remember encountering in one of these books. Not many Deep Space Nine books have been very good so far, so I was hoping an event novel would be the time the series chose to rise to the challenge. Alas, not so much.

One problem that is at least consistent throughout the whole book is that Jeter’s writing, especially his dialogue, is unbearably stuffy and overly pleased with itself. Besides making the book difficult to want to read, it turns several of the characters into charmless robots. Deep Space Nine is a fundamentally more serious breed of Trek, but its characters still smile and crack jokes. All these characters do is talk, talk, talk, spitting out bulky paragraphs entirely devoid of flavor or personality. Poor Dax probably gets it the worst of all; if it wasn’t for her first-name basis with Sisko being established from the beginning, she’d be nearly impossible to tell apart from a computer.

Yet strangely, for all its rarefied language, Warped feels like it was made up as Jeter went along. One gets the distinct sense of a class know-it-all BSing his way through a research paper. Fill it with a few big words, some tortured sentence construction, and a dash of passive voice, and it should sound smart enough to cover up the fact that it’s saying hardly anything of substance. The pleasure planet scheme is a natural enough extension of the original murder plot, even if the way it contrives to get this mediocre rando into a position of power on Bajor is laughably dumb. But when it starts getting into the reality-bending shenanigans suggested by its title, it goes hopelessly adrift. It’s almost as if Jeter read Q-Squared halfway through writing Warped and realized, “Ohhh, so these are the stakes now? I gotta ramp it up!”

Unfortunately, that takes Warped far beyond what it’s capable of reasonably sustaining. McHogue is ridiculous all over, but he’s marginally more believable as a two-bit hustler than as a demigod who wants to lock everyone inside their own snuff fantasies. Developments in the first two thirds of the book occasionally threaten to become interesting, but by the time Sisko and McHogue meet in a climactic battle reminiscent of Neo and Agent Smith’s showdown in The Matrix (despite being written four years before that movie came out), I was rolling my eyes so far back I could see down my own throat. It’s just as well; I’d rather look at whatever’s down there than at anything in this book.

Although intermittently intriguing, Warped is made unnecessarily unpleasant by stiff sentence construction, stuffy dialogue, and needlessly elevated vocabulary that saps all the personality and charisma right out of the cast. However, despite the highfalutin language and Jeter’s desperate and obvious desire to be seen as intelligent, the story feels made up as it goes along and makes progressively less and less sense. I had hoped that DS9’s first hardcover would represent a step up from the average hit rate thus far, but alas, no dice.

NEXT TIME: Data discovers the Secret of the Lizard People