Quick Note to Readers: I am currently tasked with supervising my son’s virtual schooling. Due to the time commitment this requires, review postings (like this one) may be delayed to Friday evenings or Saturday mornings for the next few weeks. The reviews are getting written, but between handling virtual schooling and having to fit in sleep (because I work overnight), opportunities to transcribe them are severely limited. I know y’all will understand because you’re cool like that. I just wanted you to know. —Jess 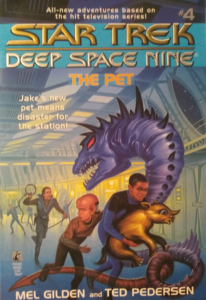 This week, when a big brown furry thing takes a shine to Jake, Odo leaves it in his and Nog’s care. But when the wormholes burps up a soap bubble that’s looking for its abducted prince, their bylaws dictate that they can’t give out any useful information for finding him. Are Jake and Nog card-carrying members of G.R.O.S.S.? Does Morn ever panic? And do you even have to read this book at all? All this and more in The Pet, a book written by Mel Gilden. What a guy!

It’s the anniversary of the discovery of the wormholes, and ships are pouring in from all over the Alpha and Gamma Quadrants to celebrate. Out on the bustling promenade, Jake gets tackled by a Saint Bernard-sized creature that instantly takes a liking to him. Its “owner” Darm demands it back, but Odo rules that since the Ulysses, the ship on which Darm serves as third mate, has been working under a Federation contract, anything brought aboard during the job is ship’s property. Odo entrusts care of the beast, which Jake names Babe (as in Ruth), to Jake and Nog until such time as the captain of the Ulysses can hand down a judgment of ownership.

Darm is not so easily deterred, trying multiple times to reclaim the alien, first with money, then by force. Each time, Babe creates a big, scary hallucination to induce panic in bystanders and ward off its pursuer. Meanwhile, in adult matters, a gigantic starship resembling a soap bubble emerges from the wormhole. Its captain, Oryx, Admiral of the High Command, demands the return of his people’s crown prince, the Next in Line. Sisko doesn’t know anything about any missing prince and asks for a little info, but because of something to do with their needlessly byzantine laws, Oryx refuses to offer anything in the way of descriptions or images, and gives Sisko one day to find the prince.

If you haven’t put two and two together from the above paragraphs, you probably aren’t paying very much attention—which I can’t blame you for, because this book is not great at keeping it. But even if I go full spoiler and say Babe is the missing prince, I’m still not giving away anything you can’t get from the book’s own back cover. You don’t even have to crack the spine once to assemble the full puzzle. The Pet plays out in such a contrived fashion that basically any even halfway informative synopsis will make everything fall automatically into place. It’s like a guy wearing pants so tight you can see the full outline of his junk: there’s nothing to reveal, because you’ve already shown me everything.

As a result, there are no stakes to this story whatsoever. The connections are simply too easy to make, even for a book aimed at a younger demographic. The back cover aligns details in such a way that you can infer that Babe is the prince from just those two paragraphs. When the one day to find Babe runs out and the soap bubble ship starts laying waste to the station, you know it’s not real because you’ve already been made aware of his species’ ability to create frightening mirages. Nothing is real, therefore there’s no reason to feel any fear or suspense, therefore this book is completely ineffective on any emotional level.

Given that Prisoners of Peace recently showed us what the YA line is truly capable of, The Pet is doubly disappointing. It would have been a bust regardless, but it looks especially facile and bad by comparison. I can’t account for Ted Pedersen, but Mel Gilden had written some pretty excellent Trek novels prior to this, so it’s disappointing that his fare for kids is such a dud. He showed quite a bit of amusing imagination in those earlier stories, so it’s a shame he couldn’t bring that energy to the table for an audience that potentially could really appreciate it. But this isn’t his and Pedersen’s only YA effort; hopefully the next one is better. It can’t hardly not be.

Deep Space Nine‘s YA line goes directly from its highest high to its lowest low thus far. There is literally no reason to read The Pet. Every twist and story beat can be inferred from the two-paragraph summary on the back cover by anyone capable of even the smallest bit of critical thinking. With everything being so explicitly telegraphed, there are no stakes and nothing to get excited about. Completely skippable.