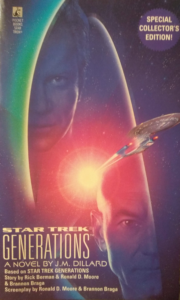 This week, the Enterprise-B scores Starfleet’s lowest ever Uber rating when James Kirk dies on its shakedown cruise. But when a mad scientist will stop at nothing to reach his happy place, Jean-Luc Picard must step outside of time and put in a formal crossover request to stop him. Is the time finally right for Jim and Carol? Are the Reeves-Stevenses being cheeky? And is Sulu ready to turn into a lizard? All this and more in Star Trek Generations, the book that finally tosses Scotty a compliment.

A few weeks ago, we took a look at the novelverse’s take on a TOS/TNG crossover, and now we’re checking out the canonical passing of the torch: Star Trek Generations, which premiered in theaters on November 18, 1994 and saw its novelized counterpart published a few weeks later in hardback. As with the lasat two films, we have the stalwart Jeanne Dillard at the book’s helm, making the best of material that doesn’t leave much slack on its leash for diversions into original territory.

To my way of thinking, original content is the primary draw of the movie novelizations, and it’s a shame that the ratio has shifted in favor of straight retellings as time has gone on. Most of the new material we get here is loaded up front; Chapter One continues the Carol Marcus hospitalization subplot from the Undiscovered Country novel. In an ironic reversal, Kirk is the one who’s finally ready to settle down, but now it’s Carol who’s itching to get back out into space to rebuild the Themis research station and resume her work. Noteworthy also is a scene in which Kirk, Spock, and McCoy trade parting gifts that packs more of an emotional punch than anything in the movie, including yes that part.

The rest of the book covers the movie more or less as is, which, to wit, spends its first half-hour on the Enterprise-B’s inaugural shakedown cruise, where Kirk appears to die while assisting with the rescue of two ships of El-Aurian refugees from an energy storm. Almost eight decades later, one of those refugees, a scientist named Tolian Soran, is trying to get back to that storm, a ribbon called the Nexus,1Capitalization my own, since oddly the book elects not to do it. which turns out to be a sort of gateway to a plane outside time that surrounds one with a simulation of their greatest desires. Soran’s is to reunite with his family in happier pre–Borg-wipeout times, and although loving your family is cool and all, he’s gone to megalomaniacal lengths to achieve it, collaborating with the Duras sisters to steal a superweapon that can destroy stars, with which he aims to reroute the Nexus into his direct path. It’s up to Picard to enter the Nexus, resist its allure, and convince Kirk, who ended up there when everyone thought he died, to do the same and help him stop Soran.

Prior to watching Generations for review purposes, I had only seen it one other time, on TV, when I was eleven or twelve. I didn’t remember much about it going in here in 2020, though it turns out that’s mostly because the movie itself is not all that memorable. The pacing is off, the Nexus and how to navigate it are never suitably explained either in the book or the movie, and the arc with Data’s emotion chip is just exhausting. I can understand Brent Spiner needing an occasional break from talking like a librarian for seven seasons, but this stuff is no good for the most part, not to mention fundamentally flawed—like, why didn’t Data consult with Picard and/or Riker before installing the chip? I did not that feel that business at all.

The story on its own is a bit slight to cover the average Pocket Books length, so it’s padded out with almost forty pages of behind-the-scenes insight written by Judith and Garfield Reeves-Stevens, authors of Federation, Prime Directive, and several supplemental works about inside Trek baseball. Though hardly essential, this companion piece is a mildly entertaining read, cutely written, and in some spots even a little quaint, as in its slack-jawed awe at the sparing use of CGI, then a novelty used only in instances where traditional models absolutely couldn’t cut it. On the whole, despite probably being added mostly out of necessity, the segment is nifty, if optional.

Between the book and the film, it’s pretty much dead even as to which is preferable. All other things being equal, I personally would take the book on this one; I fidget during movies and have an easier time engaging actively with books. Plus, you get those little morsels of extra original content, which unsurprisingly are the only times Dillard’s writing seems to light up with true joy. Both versions are acceptable, good but not great. Take your pick, basically.

People in my everyday life have keyed into the fact that when I say something is “fine”, it’s a kiss of death. Specifically, I don’t begrudge anyone else enjoying that thing, but saying that generally means that thing did next to nothing for me. That said, Star Trek Generations is fine. The movie is fine, the book is fine. Dillard tries to spice it up where she can, and the effort is evident and appreciated, but these film novelizations are gradually offering fewer and fewer chances for authors to stretch out. When the material is excellent enough to support itself, that’s not so much a problem. But this material does not quite reach that level.

NEXT TIME: Jake and Nog take care of The Pet