In DS9, Movie and Episode Novelizations 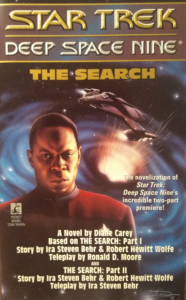 This week, the crew of DS9 is newly aware of an unfriendly presence on the other side of the wormhole, and the numbers they’re crunching don’t look so hot. But when Odo finally discovers others of his own kind, he doesn’t care who he has to ditch to catch a shuttle and head their way. What’s up with the Defiant’s bridge replicator? What carrot should you dangle in front of Diane Carey to keep her attention? And what are Beavis and Butt-head doing here? All this and more in The Search, the book that’s as helpful as a summer poetry workshop.

Last time Diane Carey pulled novelization duty, it was abudantly evident to anyone paying a crumb of attention that she would rather have been brushing her teeth with steel wool. Descent isn’t a terrible episode of TNG, but Carey’s interests clearly lay elsewhere, and the mismatch of author and material resulted in a resounding dud. The Search doesn’t suffer nearly as much from such a problem, directly resulting in an improved reading experience. There are reasons for that that are fairly easy to suss out, but let’s take care of business first.

In case you’ve slept a few times since it aired, “The Search” is the two-part premiere of Deep Space Nine‘s third season, in which Sisko and his crew, having recently become cognizant of the Dominion’s, well, dominion over the Gamma Quadrant, venture back through the wormhole to establish their peaceful intentions. “The Search” marks the introducton of a number of key series elements, the aforementioned collective and species therein notwithstanding: security chief Michael Eddington joins the senior staff, and the station gets a slick new battle cruiser, the Defiant—perfect for exploration, but also loaded for bear in case they find themselves in a pickle.

And a pickle they do find themselves in, indeed: despite the enhanced artillery and maneuverability of the Defiant, they take a pounding anyway. Sisko has to make the tough decision to strand Dax and O’Brien in the outpost at Callinon VII, and in short order everyone gets knocked unconscious except Odo, who takes Kira to a shuttle and lights out for the Omarion Nebula, to which he’s found himself drawn for reasons he can’t explain ever since he saw it on a map. Most of the second half comprises his meeting the Founders and acclimating himself to life among his own kind in the Great Link. When they tip their hand and reveal a nasty prejudice toward “solids”, however, he slowly comes to realize it might not be the amazing existence it’s cracked up to be.

Deep Space Nine has more of the sort of stuff one might expect could hold Diane Carey’s attention somewhat better than anything in TNG was ever able to. I’ve always thought of the show as more of a piece with TOS, with its sense of frontier justice and predilection for revisiting that show’s characters and situations, which definitely places it more firmly in her lane. In addition, “The Search” specifically gives Carey the exact sort of toy she loves to play with—i.e., the Defiant. With a new ship to lavish attention on and plenty of great battle and exploration scenes to put it through its paces, Carey has all the incentive she needs to remain engaged for the duration of a whole novel. Sure enough, even the lulls in the action hum with an energy that even some of the more exciting parts of Descent lacked.

Naturally, being a novelization of an episode, there isn’t a lot to talk about even in the best case that wouldn’t be redundant to cover. There aren’t actually a whole lot of new scenes; most notably, we get to see one of the drills Kira and O’Brien run at the beginning, and Dax and O’Brien’s stranding on the Callinon VII outpost is vastly extended, showing them capturing a Jem’Hadar soldier in a makeshift force field and convincing him (with some bold bluffs about the extent of Starfleet’s military prowess) to take them to the Founders. Other than that, it’s largely business as usual and a fine enough example of the format, if an inessential one.

I recommend The Search—if you’re into episode novelizations in the first place, that is. This isn’t an essential example of one, but compared to Carey’s previous outing, she’s much more engaged with the material, a fact that leads directly to a more spirited authorial voice and a fun and easy read. Extra book-only scenes are few and far between, but the ones that are present are executed well. You’re probably better off just rewatching the episode, but it’s hardly a waste of time either.

NEXT TIME: Zefram Cochrane is pursued through the centuries in Federation