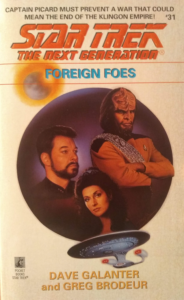 This week, getting the Klingons and a race they waged war against for seventy years to get along turns out to be exactly as frustrating as it sounds. But the negotiations go from bad to worse when Riker and Deanna go missing, Geordi goes for-real blind, and the Fox News Kool-Aid impairs Data’s command judgment. Which officer does the most puff-piece interviews? Does the Federation provide adequate phaser training for civilians? And can you really work a combadge with a spoon? All this and more in Foreign Foes, or, Blame It on the Grain.

This one starts right smack in the middle of a fine mess, with Riker kicking himself for deciding to include Worf in diplomatic negotiations. Ordinarily, he would probably be correct to take himself to task for that, but in this case, it seems the only faux pas Worf has committed is [checks notes] existing. Such is the animosity between the Klingons and the Hidran; the latter were relentlessly attacked by the former for seventy years, and although they held their own admirably, they still have an ax to grind. Now, however, each has something the other needs: the Hidran need aridium (sic?) for their power plants, and the Klingons need a vaccine the Hidran have for a virus they’ve contracted.

Worf tries to extend an olive branch by sitting next to Zhad, the Hidran ambassador, at dinner. Zhad storms out in a huff, and when Worf catches up to him to keep trying, Zhad throws hands, which Worf easily deflects. Unbeknownst to Worf, Zhad’s breathing apparatus becomes compromised at some point during the skirmish. In his death throes, Zhad stumbles back into the dining hall and murders the nearest Klingon, and Worf gets to spend yet another book being framed for inciting a diplomatic incident.

Zhad isn’t the only one not feeling so hot. Geordi returns to the Enterprise in staggering pain from a VISOR malfunction, and the only thing that saves his life is the surgical removal of his temple implants, leaving him fully blind. Deanna senses that Velex, the neutral world where the negotiations are being held, is a dead planet, and when she and Riker try to investigate, their shuttle is forced down and they wake up in a starship-like labyrinth, their escape from which puts them well and truly through the wringer. And Data, in command up in orbit, begins forming a bizarre hypothesis that blames the Klingons for the ongoing sensor interference plaguing the mission—and the longer he goes on, the more he sounds like someone commenting on a local news station’s page on Facebook. Some of the issues are caused by an external influence, and some aren’t, but if the Enterprise crew doesn’t solve all of them, a three-way war will go from a likely prospect to an inevitable one.

Foreign Foes has the names of not one, but two first-timers on the cover: Dave Galanter, whose name has appeared in a cameo prior to this, and his frequent collaborator Greg Brodeur. We’ll see a few more books from them as a duo before Galanter goes solo in the mid-aughts. Brodeur is, notably, the husband of Diane Carey, a name readers of this site will know puts me on a sort of heightened alert. Nothing of a nature that would entail happens here, however, except for one bit which is more droll than anything (and is mentioned below). Memory Alpha claims Brodeur wrote some Trek novels under Carey’s name, but Memory Beta is silent on that score, and unless Voyages of Imagination has anything to say about it, I’d probably never be able to tell which ones—assuming it’s true, that is.

The big theme of Foreign Foes is the danger of assumptions. Naturally, the Hidran and Klingons each have longstanding ideas about the other, embroiled in war as they were for nearly three-quarters of a century. This primary conflict provides most of the book’s better character work. Despite being set up as yet another “Worf gets framed” story, he really goes out on a limb and gets some cool moments in this one. Picard’s characterization is a bit off kilter, with him spending a lot of time yelling and getting testy in a fashion reminiscent of his season-one iteration, but it doesn’t hurt the book significantly—in fact, I always appreciate reminders that Picard can sometimes be flappable.

In other places, however, the book undercuts this theme somewhat. Riker and Deanna make some assumptions about the sentinels guarding the labyrinth they find themselves in that end up making their escape attempt much tougher. This plot thread simply doesn’t have much of a payoff, unless you’re somehow unusually interested in watching Riker get hurt. It’s with Data, though, where Galanter and Brodeur’s ideas really threaten to unravel. Affected by a grain sample he ingested, Data begins exhibiting an appalling amount of anti-Klingon prejudice and becomes increasingly insistent that they must be stopped by any means necessary. Although this arc resulted in several of my favorite moments, it also unintentionally makes a powerful case for the liability of androids that people like Bruce Maddox were afraid of. He’s very lucky his only real punishment is living with the guilt of nearly starting an interstellar war.

Despite the inconsistent execution of theme, however, I quite enjoyed Foreign Foes. It runs almost entirely on tension, and its opportunities for release and respite never last very long, although long enough to properly sustain such high intensity. It’s a book that demands somewhat close attention and doesn’t really allow you to kick back and relax, but that’s hardly a bad thing; diversity is what makes the world great, after all. Plus, it’s always nice to see authors score on their first at-bat.

I recommend Foreign Foes. It doesn’t quite reach the same heights of excellence that they last several consecutive TNG novels have achieved, but it doesn’t derail that success streak either. There’s more than enough tension to spare, and even though it doesn’t always stick the landing on its variations in theme, it’s more than enough of a fun romp, especially in the Geordi and Data segments, to make up for any minor missteps.