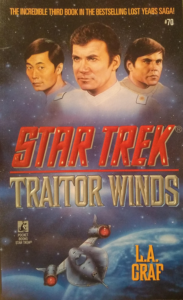 This week, while Sulu plays flyboy in the desert, Chekov learns the hard way that real-world experience doesn’t translate to college credits. But when the two men are charged with a host of crimes, Uhura wonders if she may have to have her teacher’s pet put down. Will the boys be home in time for Christmas? Is the Lost Years concept out of gas? And what are some of the more mundane occupational hazards of corporate espionage? All this and more in Traitor Winds, the book that forces us to confront the existence of Klingon anime body pillows.

Looming threats of interstellar war don’t take a break for the holidays. As Traitor Winds opens, Kirk is on a courier ship with Sarek on Christmas Day, intent on saving Sulu and Chekov from charges of murder, theft, and treason that could precipitate a full-scale conflict with the Romulans. Then we get a smash cut and record scratch to a freeze frame of Chekov and Sulu in handcuffs, along with some helpful narration: “That’s me, Pavel Chekov, and that’s my friend Sulu. You might be wondering how we got here. It all started eleven days ago…”

Back in happier days, the L.A. Graf Power Trio and Bones meet in Baltimore for seafood and nostalgia. They’re also joined by Dr. Mark Piper, the CMO in “Where No Man Has Gone Before”, who ropes Chekov into an experiment that may help medical staff improve their ability to treat Klingon disruptor injuries. The off-campus jaunt looks to be a bright spot in what has otherwise been a rough semester for the erstwhile navigator at Security Academy in Annapolis. Chekov is at a distinct disadvantage in his classes, being about three years behind the other cadets in specialized security training, and he suffer the ire and resentment of fellow cadet Jim Leong, who can (and routinely does) kick his butt eight ways from Sunday all up and down the sidewalk.

Sulu and Uhura are doing better, but both have made lateral career moves that belie their desire to get back aboard the refitted Enterprise. Sulu is testing a single-pilot shuttle called the Wraith II out in White Sands, New Mexico, where the top brass are a mite nervous about moving to the second phase, which will incorporate the Romulan cloaking device prototype recovered by Kirk and Spock in the first Lost Years installment. Uhura, meanwhile, is teaching a special-topics course at the Academy, and her star pupil is an elderly retiree auditing the course named Jackson Kahle. After accepting a lunch invitation from him, Uhura learns from Kirk that Kahle is both a retired starship captain and the owner of UniPhase Inc., which builds all the phaser banks for Starfleet’s ships.

Dr. Piper suspects one of his researchers is a corporate spy and confesses to Chekov that he wanted him for a mole. That suspicion gets confirmed in the worst way when Piper is killed during his chat with his suspect, and Chekov, who was surreptitiously recording the convo for Piper and now stands accused of stealing the disruptor, is forced to lay low and go on the lam. About the same time, Sulu learns during a test flight that his project manager absconded with the cloaking prototype’s plans to deflect blame off him, and shortly after, his shuttle becomes unresponsive and crashes in the Pacific. Adrift and accused of various and sundry crimes, both men will have to rely on their friends to prove their innocence and unravel a plot that threatens the safety of the Federation and their captain.

It should come as no surprise to anyone familar with the oeuvre of L.A. Graf (or the last year or so of this website) that they’ve once again chosen to focus on their beloved trio of Sulu, Uhura, and Chekov. Although their pet cause and some of its specific sub-tropes, like Chekov Must Suffer, are beginning to run out of steam, in this case they at least dovetail nicely with a thus-far unchecked box on the Lost Years list, that being telling a story that features literally even one person whose name doesn’t appear in the show’s main title sequence. That justifies the continuation of the Lost Years saga, though beyond that, I can’t think of much else that does.

If the Lost Years was ever supposed to be unified by any common thread less tenuous than “these stories all happened around roughly the same time”, that ship appears to have long since sailed. While it’s true that not a lot of Trek stories are set in that particular period, I doubt the necessity of having a special name for them. There doesn’t seem to be much agreement between authors as to what stories in that time frame should focus on. Traitor Winds splits the difference: it retains some connective tissue with The Lost Years, like using the cloaking device prototype and having Chekov try (without success) to emulate Kirk’s phaser-toss-and-roll move, but there’s not a whisper about Lori Ciana or Admiral Nogura or anything else you might expect from a pre–Motion Picture lead-up. Uniform details align with the Wrath of Khan style, so it doesn’t seem they were too interested in maintaining the most basic trappings anyway.

One oddly specific thing the Lost Years saga and the L.A. Graf Power Trio trend have in common is that even though the tires on both concepts have started balding, they also haven’t produced anything outright bad. This is still a good solid story with plenty of good action and intrigue. And to be fair, it’s not just another spotlight for the LAGPT. Plenty of other under-heralded characters get up to a chapter or two in the limelight as well, including Nurse Chapel, Janice Rand, Lt. Kyle, and Dr. M’Benga. Scotty also has a sizable part to play as well. In fact, if anyone feels perfunctory, it’s Kirk himself, who seems to be involved only because of some sort of contractual stipulation.

For all my remarks about the freshness of the Lost Years series, however, it’s nearly over, and the final installment will return it to the care of its original author, J.M. Dillard. I think it’s an underrated and under-explored period in Trek lore, but I’m not sure this collection of books has managed to tap its greatest potential. Dillard has been mostly on the film novelization beat for some time now, so I’m looking forward to seeing her off the leash once more. Here’s hoping Recovery ends the Lost Years deep dive on its highest note yet.

It’s been a bit of a spell since we commemorated the fallen, but suddenly he have two drop in one week. The first, of course, is Dr. Mark Piper, and while I’ve never had any great love for most pre–Kirk-era Enterprise characters, it’s still a little disheartening how they just did a canon character dirty like that. The other is Gloria Oberste, Chekov’s combat instructor at Security Academy, and hers is a little more keenly felt, not least of all because Chekov often recalls instruction and advice she gave at key moments that helps him persevere or find a way out of a jam. She’s a pretty cool character, and I’m a little surprised they just let her eat it so unceremoniously, honestly.

I recommend Traitor Winds in the sense that it is competently written and plotted, although both The Lost Years and L.A. Graf’s insistence on following the same three characters over and over are both wearing thin. Still, it’s nice to see them get by with a little help from their friends, and even though it doesn’t take the commitment to sticking to a particular era very seriously, it’s still pretty enjoyable.

NEXT TIME: Hopefully I have All Good Things to say about the next episode novelization