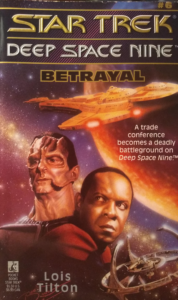 This week, when a bunch of races show up to open trade negotiations with Bajor, one bad apple bombs the bushel. Meanwhile, when a disgraced Cardassian officer goes Private Pyle on his Sergeant Hartman, he’ll need to rely on his knowledge of Ikea-manufactured space stations to help him lay low for a while. What’s a rule you should never have to say out loud? Are fake space cusses ever a good idea? And whose idea was it to make replicator and toilet parts interchangeable? All this and more in Betrayal, the book that has everyone missing Gul Dukat.

Betrayal
Author: Lois Tilton
Pages: 280
Published: May 1994
Timeline: Between seasons 1 and 2
Prerequisites: None

Betrayal gets up and running faster than any Trek novel to date. Someone plants a bomb near a cargo airlock, it goes off, two pages, bing bang boom. Just like that, you have exactly the kind of fine mess Sisko doesn’t need before a conference to negotiate trade between Bajor and several other worlds. On top of the bomb situation, a Galor-class Cardassian cruiser, the Swift Striker, shows up at the station, its commander, Gul Marak, demanding the station be returned to the Cardassians now that the government that dictated the terms of its exchange has been dissolved. Marak is such a peach that it becomes a running gag for characters to half-jokingly pine for Dukat, who lost his command during said governmental upheaval.

But it’s Berat, not Marak, who is the star of the Swift Striker story. A disgraced officer with a knack for engineering, Berat is mercilessly harassed and bullied by everyone else on board, most of all by Subofficer Halek. He keeps his cool because he knows they’re trying to goad him ito committing a capital offense, like refusing an order or assaulting a superior officer, so that they have an official excuse to toss him out the airlock. When Halek trolls Berat with contradictory orders, Berat finally breaks and decides to take this job and shove it. In this case, “this job” is a crowbar, and where Berat specifically shoves it is through Halek’s skull.

With no shot at a fair hearing, Berat ditches the Swift Striker and sets about jury-rigging a hidey-hole on Deep Space Nine—something he’s able to manage pretty easily, since all Cardassian orbital stations come from the same blueprint. But the repairs he makes to cover his tracks from his own people attract the notice of Odo and O’Brien, and together they root him out. Once Sisko gets the straight dope and realizes Berat’s situation is political, he offers him asylum. And when yet another bomb goes off and even O’Brien isn’t able to disarm it, guess who gets the call?

Occasionally, a book will have two running plot threads of such disparate quality that they’re essentially duking it out to determine whether you will, on average, like or dislike the book. In Betrayal, you have the Berat arc, which is cool and compelling and a lot of fun, and then you have the “who’s planting the bombs” business, which, in typical Star Trek novel whodunit fashion, is so predictable and tiresome that it’s barely worth talking about at all. The reader is practically guided to the culprit with air-traffic cones and a lighted runway. Between the easy mystery and the quick start, one couldn’t be blamed for guessing that Lois Tilton cribbed some techniques from Jean Lorrah.

Fortunately for this book’s prospects, the good half is more good than the bad half is bad. Obviously it’s no “Duet”, but as standalone stories about guest Cardassians go, it could be far worse. Tilton, I think, has also made the most successful attempt so far to use all the characters, even tertiary ones, and the voices sound right to the mind’s ear, with the exception of Garak, who doesn’t feel right being a purely innocent victim. (His shop is blown up in one of the bombings, and this time, he didn’t do it.) It’s not light years better than what we’ve gotten from Deep Space Nine novels so far, but it’s a relief to enjoy one (that wasn’t written for kids, at least) more than not.

As it is, this is all the Trek we’ll ever get from Lois Tilton, who ultimately concluded that licensed novels were not her bag. A bit of a shame, since Betrayal shows signs that subsequent efforts might have steadily improved. It may be for the best, though: despite a short C.V., she dabbled in other genres besides sci-fi, and her interests in the last couple decades seem to have trended toward the editorial side of things, so she might well have gotten restless in the course of time anyhow. We’ll never know for sure. But this is her stamp on the franchise, and on balance, I dug it.

I recommend Betrayal pretty much entirely on the strength of the Berat material, which is compelling enough to forgive the half-baked mystery-terrorist side of the story as well as a few other minor missteps. It’s also the first mainline DS9 book to get the feel and sound of most of the characters right. The mileage might vary for some, but I’m glad to finally be able to say that I enjoyed a DS9 novel.

NEXT TIME: The Lost Years saga continues with Traitor Winds