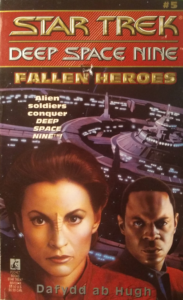 This week, when Quark acquires a Cardassian lockbox, Odo demands to be present for the grand opening. But when Quark pushes the little red button, he fast-forwards to some gnarly spoilers. Meanwhile, the rest of the crew find themselves trapped in a series of unwinnable mandatory battles. How many types of Ferengi cringe are there? When’s the worst time to get self-conscious about cursing? Could this have been the shortest Star Trek novel ever? All this and more in Fallen Heroes, the book where Odo is the hottest person on the station.

Fallen Heroes
Author: Dafydd ab Hugh1First name pronounced “DAH-veth”.
Pages: 282
Published: February 1994
Timeline: Between “Rules of Acquisition” (S2E7) and “Necessary Evil” (S2E8)
Prerequisites: No knowledge of the show is required. Surprisingly, however, there are multiple references to what were at the time extremely recently published DS9 books—namely, The Siege (#2) and The Big Game (#4).

Following a transaction with a Lonatian trader, Quark sees a net gain of one (1) sealed Cardassian mystery box, which scans as safe, much to Odo’s dismay. It takes some nerve-wracking safecracking, but Quark manages to avoid setting off the self-destruct mechanism and successfully opens the box, which contains not two tickets to a comedy club, but a small nondescript trigger. Quark pushes the button, and he and Odo quickly recover from a brief DVD skip to find the station bathed in an all-encompassing silence. A little light exploration reveals (almost) everyone aboard the station is dead, and Odo eventually pieces together that he and Quark were in a static time bubble while whatever happened was happening.

Three days earlier, a ship of unknown provenance exits the wormhole, its crew demanding the immediate return of their prisoner. Before anyone can figure out what they’re talking about, the mysterious aliens forcibly board the station, cut through its shields like melted butter, and swiftly and brutally murder anyone who can’t answer the question of where their prisoner is to their satisfaction—which, since they never offer even the slightest hint as to what they’re on about, is literally everyone. The setting alternates between the siege and its aftermath; with each new body Odo and Quark stumble upon, we get a flashback to that character’s valiant last stand. Some are more exciting than others; Kira’s and Bashir’s are both pretty good, and Sisko’s in particular is a big standout.

Fallen Heroes is the Star Trek debut of Dafydd ab Hugh, who we will, in the course of this project, see a modest number of stories from, most of them set in Deep Space Nine. He’s also known for writing four Doom novels and the Hugo- and Nebula-nominated novella “The Coon Rolled Down and Ruptured His Larinks, A Squeezed Novel by Mr. Skunk”. This novel, like another recent one, Here There Be Dragons, was inspired by a desire to subvert a Trek convention—in this case, bending the “everybody dies” rule. This is a very difficult kind of gambit to pull off. John Peel managed to do it pretty well. Dafydd ab Hugh … didn’t.

The obvious major problem with a story where everyone dies is that there’s no way to get emotionally invested. When the status quo has to prevail and you know that everyone has to be okay, the impact is muted. Now, you can argue that there have been deaths and close calls in Star Trek novels that were patched up yet still worked, and I’d agree. But there has to be some extra dimension to it. A character could have a fundamental inkling that this is not the correct order of the universe, like Spock in The Entropy Effect or Riker in Imzadi. When Chekov is knocking on death’s door in an L.A. Graf novel, it’s a sure bet he’s going to be fine, but they always make sure to pair with Sulu or Uhura, his two best friends on the Enterprise, and their rapport and their response to his suffering add emotional heft.

The reason it doesn’t work here, I think, is threefold. One: it’s an issue of excess over moderation. It’s easy to buy the idea of one or even two characters facing certain death; having almost everyone do it strains credulity. Two: even if you’ve watched all of Deep Space Nine and you personally are close to these characters, they are not close to each other at this point in the show. Come back after the Dominion War and try this out then. And three: it’s only done for shock value—nothing more.

A problem like that is enough to derail a book all on its own, but there’s still more to unpack. Another gigantic issue with Fallen Heroes is that its entire premise depends on a thoroughly contrived bit of obfuscation. Nothing about this story works if the Bekkir (the alien invaders) don’t come in guns a-blazin’, shooting first and asking questions never. IF they communicate even one aspect of their situation, the rest gets solved over tea and crumpets on the promenade and this story is ten pages long. There is no real compelling reason for the Bekkir to be the way they are other than not being able to justify the story otherwise. And yes, this is addressed within the text,2Page 144, if you’re able to follow along. and no, it doesn’t make it any better.

There are some decent bits here. The action sequences are mostly pretty good, and the climax actually possesses the intensity the rest of the story wishes it had, with Odo in particular as close to a fatal meltdown as he’s ever gotten. (It’s telling that the one near-death in the book resonates more than any of the actual ones.) But the things it botches are about as major as can be—ideas with drawbacks that should have gotten chucked out the window during the brainstorming phase. There are some things you don’t often see happening in novels, and Fallen Heroes calls to mind many of the very good reasons why that generally is the case.

I strongly do not recommend Fallen Heroes. The book hinges nearly totally on a couple of heavily faulty notions, and features a couple of other unsavory choices besides. Though not totally without its upsides, they’re not nearly enough to even begin salvaging the wreckage. But hey, at least it didn’t lack for things to talk about.