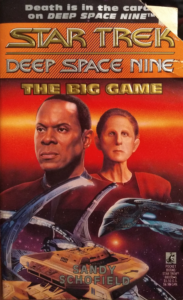 This week, when Quark’s poker tournament draws a full house, Odo bets it’ll flop. But when one of the players is murdered, Odo decides to ante up, flush out the culprit, and get some straight answers. Meanwhile, subspace waves cut the station’s decks, and Sisko doesn’t know jack about where they’re coming from. Will he fold under Bajoran and Cardassian pressure? Does he have an ace in the hole? Is Deep Space Nine royally screwed, or is there a solution that suits everyone? All this and more in The Big Game, the book where the deal goes down.

Very few people may care about baseball in the far-flung future, but The Big Game dares to posit that poker may well capture all kinds of alien imaginations. It certainly appeals to Quark, whose Galactic Series of Poker event promises to attract slimeballs and ne’er-do-wells from all across the galaxy, including Grand Nagus Zek; the Duras sisters, Lursa and B’Etor; Berlinghoff Rasmussen, the con man from the 22nd century who once tried to convince the Enterprise-D he was from the 26th; and Phil Hellmuth.

Subspace waves are buffeting the station something fierce, but the tournament proceeds more or less smoothly—that is, until a player gets murdered while the lights are down. Odo, previously content to deride the game from the peanut gallery, comes to the conclusion that the most effective way to sniff out the killer will be to surveil as a contestant—a plan that will require him to learn how to actually play poker, a game he considers completely pointless.

Odo actually makes quick work of the case, which is good for Sisko, who has to deal with the Cardassians believing the subspace waves are a weapon being used against them, the Bajorans denying it, and both itching to fire on each other. But the poker murderer volunteers a hot tip: the waves are probably being caused by a group of poachers operating out of phase to hunt a mythical space animal known to the Bajorans as an Espiritu. A plan forms to refit a runabout to shift out of phase and tell the Ghost Riders to go kick space rocks—and if they don’t succeed, all parties involved may well have another war on their hands.

“Sandy Schofield” is an alias used by the husband-and-wife writing team of Dean Wesley Smith and Kristine Kathryn Rusch, who between them boast an eye-popping number of writing and editing credits. They say they used that name because they thought their full names wouldn’t fit on a cover, though that clearly isn’t the problem they (perhaps jokingly) suggest it is, since we’ll see those long names on plenty of Star Trek covers to come (sort of a reverse L.A. Graf situation). The Big Game is indeed the first of many, though hopefully future installments work out a little better than this one.

Chronologically, The Big Game slots into the beginning of season two, but it feels more like a season-one episode, and not just because George Primmin shows up for two seconds.1Based on where it lands in the timeline, if you count non-canon sources, The Big Game technically marks the last appearance of George Primmin. The sense I mean that in is it’s dotted with Next Generation characters who, in this specific context, feel included primarily as lifelines to help us keep our Star Trek bearings in this wacky and disorienting new universe. Think “Q-Less”, or “The Forsaken” (not to bash the latter—I actually really like that one). This might be more appreciated and necessary for TV, but I’m not sure the type of fan who’s into the books requires this sort of hand-holding. That said, the characters that fit that description do have a M.O. for poker that shows mindful consideration; Rasmussen in particular is a good fit for this story, and quite entertaining.

Even without the Next Generation cameos, however, this is still a busy book. The Big Game marks the first non-Emissary novelverse appearance of many characters, major and minor. Garak has a seat at the table, offering a delightful dose of his typical Garak-ness. The Grand Nagus is present as well, though he doesn’t play as significant a role as his involvement might initially lead you to believe. Jake and Nog crawl through various nooks and crannies, peeking in on multiple Ferengi cheating schemes I won’t even begin to pretend I cared about. And it’s good to finally be in the hands of authors who actually understand how Dax talks to Sisko.

Although there’s far more at stake in this story than just a card game, the poker bits are what mainly held my interest. Honestly? Take away the boring cheating junk and the Ghost Rider thread, and I could read a story the size of two event novels about various Trek characters meeting at the poker table, trying to size each other up and figure out their psychology. Naturally, I understand that that’s not exactly a publishable idea, and I can’t hold it against the book since that’s never something it realistically never would have given me, but hey, let a boy dream.

Though I liked several individual components of this book, I wasn’t able to say after finishing it that I liked it on the whole. Sometimes a story adds up to more than the sum of its parts. This one, though? Considerably less. Several passages offer something cool and/or creative, but it never quite coheres into a thing I would all-inclusively call “good”. That’s a shame, but some debuts have been way rockier. There are definitely glimmers of potential, and I feel confident I’ll be thumbs-upping a Smith/Rusch work sooner rather than later.

Do I recommend The Big Game? Negative, Ghost Rider. But it’s a soft opposition. There are a lot of individual parts I liked about it, but they didn’t quite add up to a book I can say I liked. Still, as thumbs-downs go, this is certainly one of the less enervating and annoying ones. Heck, if you like card games, Next Generation cameos, and showdowns with space poachers, you might even see how the mileage varies for yourself. Personally, however, I don’t really see myself wanting to pick this one up again.

NEXT TIME: There’s people in that nebula in Here There Be Dragons