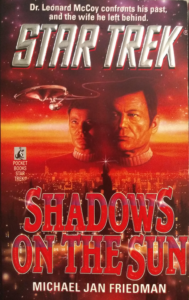 This week, after the Enterprise beats the final boss, they get roped into one more postgame side quest. But the only thing Dr. McCoy has less fond memories of than their destination is the pair of diplomats along for the ride. Now he must confront the bitter feelings he shipped out to space to run away from. How much sticking to your day job is the right amount? Who’s the worst senior officer to get caught gossiping around? And what’s happening on Risa? All this and more in Shadows on the Sun, the book that knows how the seashells really work.

Shadows on the Sun
Author: Michael Jan Friedman
Pages: 340
Published: August 1993 (hardcover)
Timeline: Right after The Undiscovered Country (present); 12 years before TOS (past)
Prerequisites: Not much other than a very light general familiarity with McCoy’s past

Heading home after the Khitomer Peace Conference, the gravity of retirement begins to impress upon the senior Enterprise staff. But on the way to the decommissioning, Commodore Montoya at Starbase 23 hands them a “detour” mission. Perhaps hoping to catch lightning in a bottle twice, the Enterprise is sent in a diplomatic capacity to the planet Alpha Gederix IV, a.k.a. Ssan, a world where “assassination is an art unto itself” and ritual killings are woven into the very fabric of the culture. Twin and triplet births are very common on Ssan, and implementing  Now, a massive civil war threatens to break out over the fact that some folks had the temerity to ask, “Instead of controlling our population with this byzantine system of institutionalized assassination, why don’t we just use birth control?” The gall, I know.

No one has heard of the place before now except Dr. McCoy, who isn’t exactly keen to give it a 5-star Yelp review. Bones was stationed on Ssan in his first assignment as a medical trainee, and cautions the crew that the Ssani make the Klingons look like the Care Bears. Granted, he hasn’t been there in almost fifty years, but he doubts reason and genteel conversation will work any better now than they did then. Montoya evidently disagrees, because she sends a pair of envoys along with them. McCoy’s day is already a poop sundae, but the envoys are the cherry on top, because they’re none other than Jocelyn, the woman he bitterly divorced just prior to enlisting in Starfleet, and Clay Treadway, once his rival for Jocelyn’s affections, now her husband.

Shadows on the Sun is divided into three “books”. In the first part (“McCoy”), the mission begins in earnest. Talks with the Ssani begin on shaky footing as Clay decides not to brush up on cultural basics and nearly ends the talks with his insultingly brusque approach. The section culminates with the decision to approach the assassin group in person on the planet, which goes awry immediately; Spock and Clay are successfully beamed out, but signal-jamming mineral deposits leave Kirk and Jocelyn stranded and summarily taken hostage. The second part (“Ssan”) flashes back to McCoy’s days as a Starfleet trainee providing impartial Federation medical assistance to the not-yet-Federation-admitted world during one of their bloody civil wars. Bones accidentally saves an assassin, much to the chagrin of many, including his CMO and the assassin himself. While seeing to his charge’s recovery, he takes his eye off the ball when he gets the bright idea to use his fledgling chumminess with the assassin to ply him for useful intel that might tip the scales against the assassins, in the process learning a crucial lesson about sticking to being a doctor and avoiding politicking. In the final part, elements of the first two books dovetail, some light bulbs about certain people’s identity come on, and the status quo—as it must be, no matter how painful it is to do so—is reasserted.

Prior to this book, Jocelyn’s main function, on the rare occasions when she is even brought up, has been to serve as a shorthand for a time in Leonard McCoy’s life that he would rather not talk about, and to this point the series has been content to take his word for it and not force the issue. It’s as if the invoking of her name alone was deemed a sufficient reason to close the book on that era. So then if nothing else, the book’s refusal to accept this piece of lore at face value would make it a noteworthy read. But it also has the emotional core and the strength of character it needs to put it near or at the top of the Star Trek novel mountain.

As I read Shadows on the Sun, my mind contrasted it with a previous event novel: Peter David’s Imzadi. Both books are about regrets and what could have been, but where Imzadi takes place mostly in happier times and emphasizes a more primal Eros type of bonding, the old man protagonist of Shadows on the Sun is more pensive and less self-pitying, and reaching the bone zone isn’t his primary goal. Also, there’s no Guardian of Forever in this book to help Bones rewrite the past. McCoy’s initial enmity is understandable, but the maturity they both muster in order to work toward reconciliation and their gradual admission of their culpability in the collapse of their marriage creates a much more satisfying conclusion to their arc than just writing the whole thing off as “Jocelyn” could ever have been.

I found this book immensely satisfying. It’s a very mature exploration not just of how relationships get damaged but how to work toward healing. Every character bursts at the seams with personality, and the climax came closer to making me cry than any book since The Wounded Sky. Some of what might be considered twists are fairly telegraphed, but this isn’t the kind of book you read to be shocked by a revelation you didn’t see coming. It’s one you read to see growth—in this case, how a certain doctor develops the hard shell that serves them so well throughout his career, and how he learns how and when to put that aside for the sake of reconciliation and defusing of hostilities. This is a Bones story worthy of Diane Duane. It’s that good.

I strongly recommend Shadows on the Sun. It takes a piece of character backstory that has always been treated like a settled matter and forces it open to examine the feelings within, to excellent effect. The story of Bones’s first mission as a trainee is a lot of fun, and the way he and Jocelyn reconnect feels genuine and honestly rendered. This is the kind of book where the pages just melt away one after the other, and it’s a fantastic adventure that brings together two threads of Dr. McCoy’s life separated by nearly half a century.

NEXT TIME: Shipping off to the Academy for Worf’s First Adventure