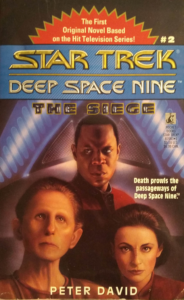 This week, when the wormhole starts coughing up Borgballs, Sisko makes the tough choice to close it down for a while. For his trouble, he gets hounded by a missionary who keeps asking to speak to the manager. Meanwhile, Bashir tries to wrap his head around anti-vaxxers, and a serial killer with the same shapeshifting abilities as Odo brings chaos to the crowded station. How much would Deep Space Nine cost to buy? Could Odo actually fly if he shapeshifted himself some wings? And will O’Brien ever learn how to do even one magic trick? All this and more in The Siege, the book where keeping it real goes horribly, horribly wrong.

The Siege
Author: Peter David
Pages: 272
Published: May 1993
Timeline: One month after “A Man Alone” (S1E4)
Prerequisites: Familiarity with the first five episodes or so helps, but isn’t mandatory
Not to be confused with: “The Siege” (S2E3) or “The Siege of AR-558” (S7E8)

It’s flu season, and not even wormholes are immune: the one situated next to Deep Space Nine has come down with a nasty bout of subspace compression. Just to demonstrate how serious that is, we see it hork up some Borg cube debris. Fully aware that closing down the wormhole will fill his station to capacity with Grumpy Guses, Sisko makes the decision to temporarily deny any and all passage through the wormhole.

Among those whose jimmies are rustled by this inconvenience is Mas Marko, an Edemian missionary spreading the gospel of K’olkr throughout the galaxy along with his wife, son, and two retainers. Marko is more than a little pushy about going through the wormhole, but is dissuaded effectively enough when Sisko rolls that beautiful Borg footage for him. For the time being, Marko is content to proselytize on the promenade, and you can probably guess how receptive people are to that. But Sisko gets a funky vibe off the son, and enlists Bashir to ingratiate himself to the boy and figure out his deal.

All the while, a serial killer has been quietly infiltrating the station. There’s no rhyme or rhythm to his victim selection: first, he chooses one of Mas Marko’s retainers, then brutally eviscerates a Cardassian about to sexually assault a Bajoran woman. (Her poor daughter witnesses both.) Sisko and Odo must entertain the possibility that not only do they have a serial killer onboard, but also that by all accounts said killer is, like the constable himself, a shapeshifter. Keeping the masses calm long enough to conduct a proper investigation looks to be a tall order, to say nothing of assuaging their fears about letting a shapeshifter take charge of that investigation.

As the first original novel for a new series, The Siege faces an uphill battle. In order to strike when the iron is hot, an author must start writing before the series has even gotten off the ground, well before the characters’ personalities are locked in and sometimes before they are even cast. Whatever they make up will inevitably be invalidated by future developments, maybe even by the time the book hits shelves. It really is an unenviable spot to be in. The best-case scenario for an author is to somehow create a story that’s entertaining enough to make the wildly off-base personalities forgivable. The obvious analogue here is Ghost Ship, the first post-“Encounter at Farpoint” TNG novel, written by Diane Carey. Carey had far less access and material to work with than Peter David, but Ghost Ship is (I maintain) fairly enthralling despite being based nearly entirely on the series bible, and if you can swallow the goofy character portrayals. David was at least armed with the first five scripts, and he nailed all the personalities astoundingly well, considering. So why don’t I like The Siege nearly as much?

Part of it comes down to what I feel to a be a misapprehension of the fundamental nature of Odo. Insofar as there is a “main” character is this book, I’d say it’s Odo; the biggest plot thread has to be solved by him and raises resonant questions about him and his shadowy origins. Being drawn to Odo and his whole sort of Weltanschauung is understandable—if I didn’t know anything about the show, I think he’d be one of the first characters I’d key in on myself. But where David misses the mark is that he interprets Odo’s abilities through the lens of superheroics, which is more amusing as a thought exercise than in actual practice.

Even from the jump, a hallmark of Odo’s shapeshifting is that he doesn’t do it very well. He can assume a humanoid form just well enough to not freak out some children and most adults. Yet here he holds his own against a murderous psychopath of far greater shaping skill in a contest of rapid-fire transformation on multiple occasions. Turning into, say, a mouse or a table is one thing—although not terribly sexy, such metamorphoses usually serve a pragmatic end of clandestine surveillance. Shapeshifting is a fact of Odo’s life that he begrudgingly tolerates. But that’s not much fun to write about, so instead we get a flight of fancy straight out a comic book where two men try to pummel each other with hammer arms. David seems to be under the impression that they would do this sort of thing on TV if they had the budget, but I’m not so sure. At one point Odo grows wings. And flies. Yeah.1This seems even more egregious when you consider how much of a fit David throws in the prologue about how Odo’s mass would be the same even if he turned into something tiny like a mouse.

Other running concerns involve a Ferengi named Glav who’s interested in purchasing the station and O’Brien trying to learn magic tricks and sucking at it. These seem like trifles next to the heavier concepts of violence and religion, but they both tie in to the greater story in surprisingly unforced ways. Still, although David’s talent for keeping multiple plates spinning is impressive, The Siege doesn’t pass muster. Ironically, it’s not (entirely) for the reasons you would expect from a novel written prior to the show’s airing. Some of those reasons are outlined above, but there are others we haven’t talked about that are better suited to the sections below.

I give The Siege 2 out of 5 shapeshifting serial killers. Although the characters’ voices are pretty well locked in for only working from a few scripts and a series bible, the book succumbs to many of David’s less savory inclinations plus a few new ones. Approaching Odo’s abilities from an angle of super-heroics, and Bashir’s behavior is so appalling it takes the rest of the book down several notches. I understand the urge to call in a heavy hitter like David to get the novel arm of your new series started off on the right foot, but this couldn’t hardly be a less auspicious start.

NEXT TIME: Kirk gets a little crabby in Windows on a Lost World