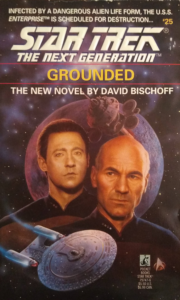 We begin in medias res, with Picard, Riker, Geordi, and Dr. Crusher sitting around in civilians’ coveralls, awaiting a verdict on the fate of the Enterprise. Admiral Davies finally comes out bearing the bad news: he has declared the Enterprise a total loss and recommends it be towed out to a safe distance and blown up with photon torpedoes. What could have brought the mighty NCC-1701-D to such an ignominious fate?

Rewind one week to the planet Phaedra, a world of wildly fluctuating geological and electromagnetic activity, where the crew is mounting an effort to rescue the science team at the Beta Epsilon station. In their investigation, they encounter increasing quantities of a clay-like substance with crystalline flecks in it. Readings repeatedly show nothing remarkable about it, to the point where it’s obvious the narrative doth protest too much. They track a truckload of it back onto the ship—some wily word wizardry later explaining its slip through the transporter’s biofilter—figuring a good run through the wash should take care of it.

Meanwhile, Data hangs out on the holodeck with Penelope Winthrop, a sweet but awkward girl prone to entering a fugue state whenever she gets stressed out or socially overwhelmed. Counselor Troi has placed the two with each other, positing Data as a non-threatening male (or at least, male-presenting simulacrum) with whom Penelope can practice wading into the more tempestuous waters of social interaction. Initially, I read Penelope’s condition as epilepsy; I’ve known a handful of people whose seizures manifested as the kind of blank-outs she has. Rather, they’re almost immediately attributed to autism, a subject this book handles with all the gentleness of an NFL linebacker.

Penelope is the B-plot, but she’s what’s going to stand out most to the eyes of 2019. As is to be expected from any franchise that survives for over half a century, values change and portrayals that were once acceptable fall out of favor. That said, the ideas of autism advanced here smell a little fishy even when allowing for the nascent understanding of the condition that was taking shape in that day. Bischoff makes a reasonable enough connection by linking it to Barclay, but that’s about the only mark he hits. First off, anyone with a modern understanding of autism can tell you that the notion of it as something to be “cured” (p. 45) is offensive. The social awkwardness often associated with autism (specifically, with Asperger’s syndrome) is more of a direct symptom of it and not so much an external byproduct of other symptoms, as the text seems to suggest. And above all, being autistic certainly does not give someone “an unusually high psi-quotient” (ibid.).

It’s difficult to articulate why exactly I find this last point the most cringeworthy and offensive of all, even more than the assertion that autism can or should be cured. Maybe it’s the disastrously graceless attempt to put a positive spin on a disability. Maybe it’s because it provides the anticlimax in which the alien mud dies a largely offscreen death. (Yes, the mud is sentient and malevolent. No, you shouldn’t be shocked by that development.) Whatever the case, Grounded handles its exploration of the neuroatypical mind about as well as, say, “The Outcast” handled gender issues, which is to say, clumsily. On the bright side, Penelope is a charming character—sort of a proto-Tilly, except not an officer.

Despite that and a few other missteps, Grounded is a decently fun read, with several ideas and concepts that start with a cool base but ultimately fizzle in execution. Picard has a history with the woman in charge of the science colony, Dr. Adrienne Tillstrom, and while it’s largely filler, Bischoff did do a fair job of creating a character who could mesh so amicably with him in terms of what they each wanted out of their lives. The alien clay strikes a fearsome presence, but its motivation—a genocide of all organic matter (“bad life”) borne of some vague racial memory, mapped out in short interludes containing an excess of goofy proper noun deployment—is laughably lame. One neat thing is that all of the senior officers get a roughly equal amount of feature time, a nice, even spread that’s relatively rare in TNG novels.

David Bischoff was one of the few Trek novelists of his day with bona fide canon pedigree. He helped adapt his Nebula-winning 1976 short story “Tin Woodman” into the episode “Tin Man” (S3E20), and also helped develop the story for the episode “First Contact” (the one where an undercover Riker gets injured while surgically disguised as a Malcorian and Bebe Neuwirth jumps his bones). Grounded, however, was his only Trek novel. His Voyages of Imagination entry is a touch on the precious side; my personal favorite bit is when he says, “I’d read a lot of Star Trek novels in preparation for writing my outlines. I didn’t like any of them. Not one. Not even my friends’ novels.” I’ll be the first to admit the track record of these books is less than stellar, but not even one? I don’t doubt that a Nebula and a few TV credits can fill a body with confidence, but it could hardly hurt to come a little more correct, especially if this is the material one is bringing to the table.

I give Grounded 2.5 out of 5 sentient lumps of clay. Although it introduces some nifty concepts here and there, the book falls victim to an especially nasty case of poor aging brought about by a woeful misapprehension of a condition very few people at the time had any solid grasp of. If you can forgive some of its stilted writing and dialogue, it does spin a cool yarn, but much like the alien mud that infests the hull of the Enterprise, there’s a whole lot of mess covering up the potential beauty underneath.

NEXT TIME: Kirk and his crew fall into The Starship Trap